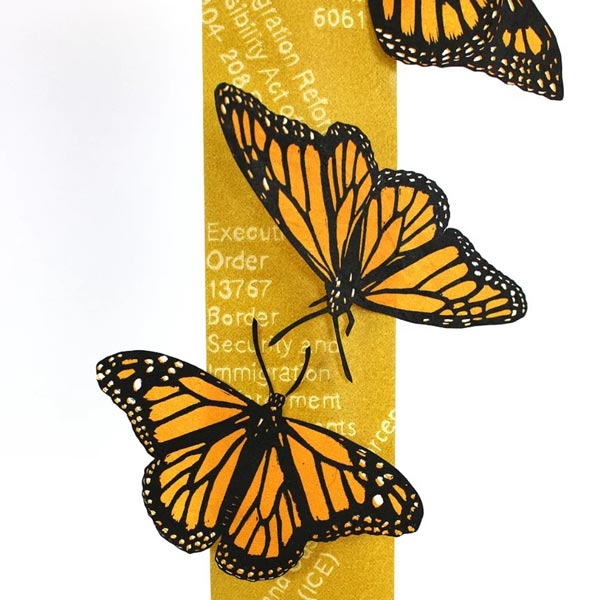 (CLINTON, NJ) -- Hunterdon Art Museum presents “Crossroads: Book Artists’ Impassioned Responses to Immigration, Human Rights, and Our Environment” and “Print+” from May 8 - September 5, 2021. The works featured in the exhibitions comment on past and present racial, social, and political issues through observations and personal stories.

According to “Crossroads...” Curator Maria G. Pisano, our world is at a crossroad and changing in a myriad of ways: refugees and migrants being displaced, an environment visibly in peril, plus constant conflicts and wars between countries and nations. In this exhibition, artists reacting to these changes lend their voice and present book works that reflect our tumultuous times.

Among the works in “Crossroads…” is “Stolen II,” an installation by U.K. native Pam Cooper created in response to the 2014 abduction of the Chibok schoolgirls in Boko Haram, Nigeria. The piece examines laws written by western countries that allowed them to abduct children from their families for racial, political, and economic reasons. 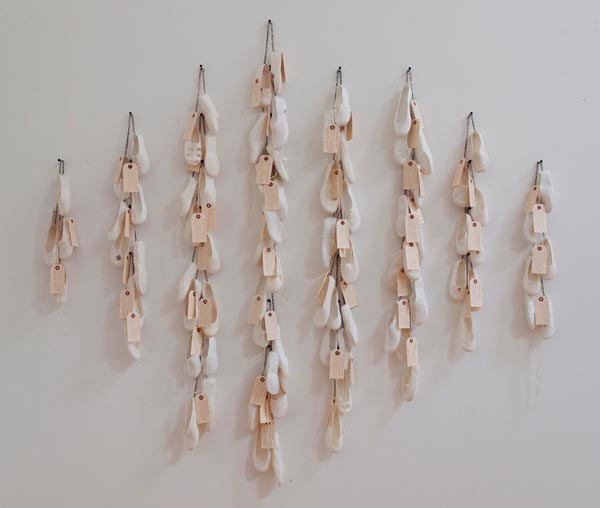 The earliest evidence of the removal of children was in the 17th century, where the U.K. took children off city streets and sent them to Virginia to increase the population. In later centuries the U.K. removed children of unwed mothers, and most ended up in the child labor force in Australia, New Zealand, Canada, and the U.S. Other examples were the so-called civilizing of the Native American, the Australian Aboriginal, and Canadian Inuit populations.

Other regimes in power in Argentina, Spain, and Poland removed the children of their political enemies and gave them to families of their supporters. The children were removed against their parent’s wishes.

In “Stolen II,” the tags attached to the shoes tell of the laws written for racial, political, and social issues allowing them to do this. The piece took two years to complete.

Curated by Sheila Goloborotko, Print+ focuses on the importance of showcasing artwork where diversity, equity, accessibility, and inclusion are and create an essential and fertile ecology. In this gathering, artists coming from various backgrounds and multiple intersectionalities present works of protest and resistance in a variety of printed methods.

While some works are tame, others are transgressive—together, this collection emphasizes the contrast and abundance of young and mature contemporary voices.

Included in Print+ is biracial Latina artist J. Leigh Garcia, a seventh-generation Texan of European matrilineal descent and the paternal granddaughter of Mexican immigrants. Garcia’s artistic practice is shaped by the roots of her ancestry, and through printmaking, papermaking, and installation art, encourages awareness of the current immigration and foreign affairs policies through the lens of her biracial cultural identity.

Garcia’s sculpture piece, “Catching Flies,” is a symbol of discriminatory immigration policies and inspired by the good immigrant vs. bad immigrant rhetoric often surrounding the Deferred Action for Childhood Arrivals (DACA) policy. The flypaper symbolizes Immigration and Customs Enforcement (ICE) and other systems set up to catch flies or ‘bad’ immigrants, while the monarch butterflies represent all immigrants and the reality that most undocumented individuals do not fit the ‘bad’ immigrant stereotype.

A virtual reality tour of “Crossroads…” and “Print+” will be available on the Hunterdon Art Museum website later in May. The Museum will host workshops and events in conjunction with the new exhibitions throughout the coming months.

Hunterdon Art Museum is located at 7 Lower Center Street in Clinton, New Jersey. The galleries are open 11:00am - 5:00pm. Thursday - Sunday. Tickets are seven dollars for adults, five dollars for seniors/military/students, and free for children under 12.

Print+ is made possible in part by the generous sponsorship of the International Fine Print Dealer’s Association.

Programs are made possible in part by funds from the New Jersey State Council on the Arts, a partner agency of the National Endowment for the Arts; The Geraldine R. Dodge Foundation; New Jersey Arts and Culture Recovery Fund; Hunterdon County Board of County Commissioners, through funds administered by the Cultural & Heritage Commission; Hyde and Watson Foundation; Investors Foundation; The Large Foundation, and additional support provided by the IFPDA Foundation along with other corporations, foundations, and individuals.