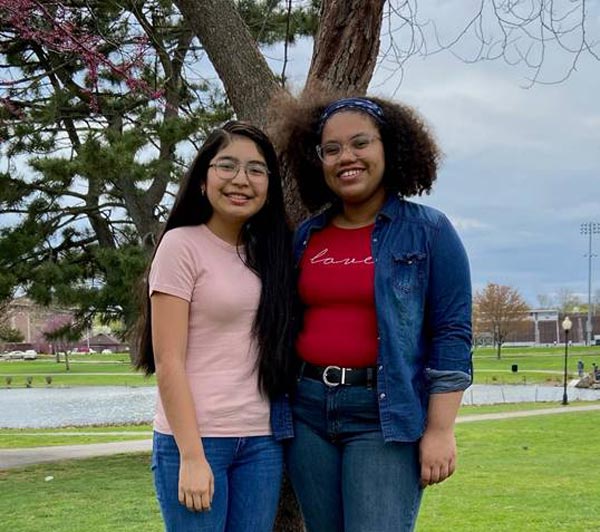 (PATERSON, NJ) -- The Paterson Music Project (PMP), a program of the Wharton Institute for the Performing Arts, has announced that students Geanelly Vallecillo and Rachael Diaz have been accepted into the prestigious Los Angeles Philharmonic’s YOLA (Youth Orchestra Los Angeles) National Festival. An intensive orchestral training program, the YOLA National Festival is open to students ages 12-18 from El Sistema-inspired programs and similar initiatives from across the country that are invested in youth and community development through music education.

Said PMP Director Elizabeth Moulthrop, "We are so proud of Geanelly and Rachael for being accepted into the YOLA National Festival. This is a result of their hard work, dedication, and leadership at the Paterson Music Project. They can do anything they put their minds to."

Both violists, Geanelly and Rachael began their musical studies with the Paterson Music Project in 2014 and were selected for the PMP Honors Program during the 2018-19 and 2019-20 academic years. Residents of Paterson, they attend Passaic County Technical Institute (PCTI) and are currently part of the Paterson Music Project High School Youth Leadership program, a paid internship where they assist in classes with younger students, perform for special events, and help plan and execute concerts. In addition to attending the Montclair State University Extension Division from 2016 until the COVID-19 shutdown, both Geanelly and Rachael have participated in regional and national El Sistema events including the virtual El Sistema USA National Seminario 2021, virtual ESUSA Northeastern Seminario 2020, and the King Residency, an annual symposium with a focus on collective composition at the King School in Stamford, Connecticut. They are members of the PMP Sextet and PMP Concert Orchestra.

Said Rachael, “Getting accepted into the YOLA National Festival Symphony Orchestra was hard for me to believe because it is really competitive and hadn’t been done before at the Paterson Music Project.”

“My advice to younger musicians is that even if you think you are going to fail at something, you should still try,” continued Rachael. “Rejections and waitlistings aren’t necessarily failures but lessons in life that will help you improve in the future. The first year I auditioned for YOLA, I didn’t get in. To be fair, I didn’t really give it the time that it required. But without that experience, I wouldn’t have had the motivation to work harder and I wouldn’t have known what the audition process was like. Keep a positive attitude even when faced with difficult challenges and don’t give up.”

Said Geanelly, “I look forward to meeting other musicians just like me at the YOLA National Festival and performing with them. It feels amazing to know that my perseverance as a musician has given me this opportunity!”

The Paterson Music Project (PMP) empowers children to achieve their full potential through the joyful pursuit of musical excellence. Inspired by the global El Sistema movement, PMP uses music education as a vehicle for social change in its home city of Paterson.

PMP provides tuition-free musical training to students throughout Paterson after school. Students study a primary instrument and participate in ensemble practice and instrumental sectionals. They receive an average of 6 hours of instruction per week and in addition, may participate in an optional private lesson program. Students perform frequently for the community and perform an average of 30 events annually.

PMP launched its first site at the Community Charter School (CCSP) of Paterson in January 2013 with 32 second graders and has since added a new class of students each year. Since its inception, PMP has partnered with the Paterson Public Schools to open programming to students at Paterson Public Schools 1, 24, and 26. PMP has also partnered with William Paterson University’s Music After School Program to create a central band site at the Norman S. Weir School to serve over 60 students. There are now over 250 students in the program across the city of Paterson in grades 1 - 10. PMP also runs a Saturday program at the Rosa Parks Fine and Performing Arts High School in Paterson.

Wharton is New Jersey’s largest independent non-profit community performing arts center serving over 1,400 students through a range of classes and ensembles including the 14 ensembles of the New Jersey Youth Symphony which serve 500 students in grades 3 - 12. Beginning with Early Childhood music classes for infants and toddlers, WIPA offers private lessons, group classes and ensembles for all ages and all abilities. We believe in the positive and unifying influence of music and the performing arts and believe that arts education should be accessible to all people regardless of their ability to pay. We teach all instruments and voice and have a robust musical theatre program.

Wharton Institute for the Performing Arts is located in Berkeley Heights, New Providence and Paterson, NJ and reaches students from 13 counties. All of WIPA’s extraordinary faculty members and conductors hold degrees in their teaching specialty and have been vetted and trained to enable our students to achieve their personal best.