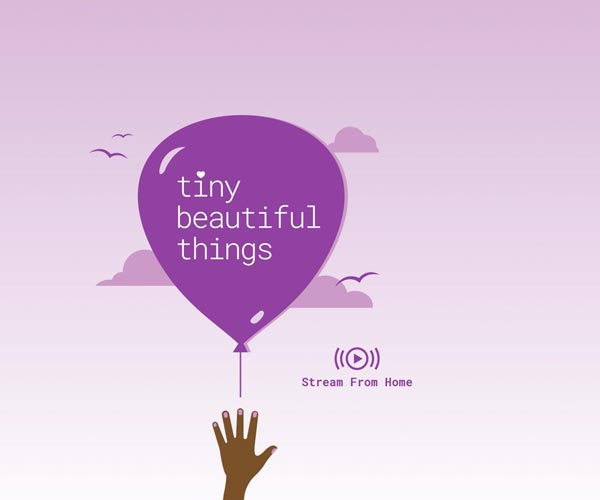 (NEW BRUNSWICK, NJ) -- George Street Playhouse (GSP) is continuing the season with Tiny Beautiful Things, a heart-tugging production based on the best-selling novel by Cheryl Strayed. Oscar-nominated writer, Nia Vardalos adapts Strayed’s book based on the Dear Sugar advice column into an enrapturing and uplifting play that surges with emotion. The show's stars GSP veterans, John Bolger, Kally Duling, Ryan George and Laiona Michelle. Streaming will begin May 4 and will run through May 23, 2021.

"The rich and layered comfort food which Sugar doles out to her readers questing for help is the perfect sustenance for the soul we all need right now,” said George Street Playhouse Artistic Director, David Saint.

Tiny Beautiful Things follows the relationships between an anonymous advice columnist named Sugar and the many real-life readers who pour out their hearts to her. Sugar uses compassion and empathy to comfort her readers and provide them with guidance on how to navigate life transitions. This uplifting production takes its viewers on a journey to understanding the ups and downs of life- as sad, confusing or frustrating as it may be at times, Strayed’s book reminds its readers to enjoy the Tiny Beautiful Things. This show is about reaching when you’re stuck, recovering when you’re broken, and finding the courage to ask the questions that are hardest to answer.

Tickets are available for $33 per household at GeorgeStreetPlayhouse.org. Tiny Beautiful Things is recommended for mature audiences. Conscientious viewing is advised. Click here for more information regarding this advisory.

JOHN BOLGER returns to George Street Playhouse for an eighth time, having previously appeared here in The Trial of Donna Caine, American Hero, American Son, Outside Mullingar; Good People; Twelve Angry Men and Lips Together, Teeth Apart. National Tours: South Pacific and Dirty Dancing; Regional: Five Presidents at Bay Street, cover for That Face at MTC; staged concert of Mendelssohn’s Midsummer Night’s Dream with The Baltimore Symphony Orchestra; Richard III at Hartford Stage; The Real Thing and Antony and Cleopatra at The Old Globe; Light Up The Sky at The Roundabout; The Lady From Maxim’s at The Huntington; Safe Sex at La Mama; Midsummer Night’s Dream, Macbeth, Twelfth Night, As You Like It, The Sea Plays and Ages of Man,  with The Willow Cabin Theatre Co. TV: Taken, Bull, Homeland, The Blacklist, Orange is the New Black, The Black Donnelly’s, Sex and the City, Law & Order, NYPD Blue, General Hospital, One Life to Live and Another World. Film: Patriots Day, The Only Living Boy in New York, Just Looking, Parting Glances and Black and White. And thank you Pat McCorkle for your decades, yes decades, of encouragement and support. You wonderful woman you!

KALLY DULING is thrilled to be back at George Street! George Street Playhouse: The Trial of Donna Cain, American Hero. Broadway and National Tour: Fun Home.Regional: Into the Woods (TUTS), The Tall Girls (Alliance Theatre), Next to Normal (Baltimore Center Stage), Fifth of July (Williamstown Theatre Festival/Bay Street), Bus Stop (Fulton Theatre), Little Women (John Engeman Theatre). TV/Film: The Good Wife, One Bad Choice Voiceover: Nickelodeon, Scholastic, Fisher Price. Huge thanks to David Saint for thinking of me for this incredible project at a time when we all need a little art in our lives. Love to my family, especially B and Winnie Rose! 8.6 Instagram: @kallyduling

RYAN GEORGE is a Miami raised, NYC based actor, with a BFA from the University of Florida. His NYC credits include the title role of Othello (Alchemical Theater Laboratory) and Jeb in Rush (Paradise Factory Theater). His Regional Credits include Oshoosi Size in The Brothers Size (Gablestage), Fish in The Royale (Gablestage), Spike in Vanya and Sonia and Masha and Spike (Florida Rep), Trevor in The Play That Goes Wrong (Repertory Theater of St. Louis), Associate in The Christians (Riverside Theater) and Terrance in Thirst (CATF). He was last seen at George Street as Asa Bedford in Midwives and is excited to be able to be part of this beautiful piece of work being offered directly to the homes of an amazing audience."

LAIONA MICHELLE added writer to her resume with her double bill as writer and star of the critical and box-office smash, Little Girl Blue, The Nina Simone Musical, which launched its world premiere engagement at the George Street Playhouse on Feb 1, 2019. Now, she takes on the mantle of book writer, for a new project, Mandela -- a musical based on Nelson Mandela’s life; from his days as a leading activist against Apartheid, to his imprisonment and eventual release to become the nation’s President. Laiona Michelle began to gain national notoriety when she made her Broadway debut in 2015, in the musical, Amazing Grace, which opened at the Nederlander. Cast in the principal role of Nanna, a woman stolen away from her family by slave traders, she delivers one of the stand out musical moments of the play. Laiona Michelle has been nominated for numerous awards including the Independent Reviewers of New England, Best Lead Actress award (2001, Stonewall Jackson’s House); and she is the recipient of the Barrymore and Carbonell Awards (2004, Constant Star); The NAACP Hollywood award (2005, Constant Star), and she was nominated for the Helen Hayes Award (2005, Yellowman). Television:  Lift, All My Children, Law & Order: SVU, Law & Order: Criminal Intent, The Blacklist, and Crashing, as well as Amazon’s Sneaky Pete. Special thanks to the George Street Playhouse for their love and support.

David Saint (Director/Artistic Director) is in his 23rd season as Artistic Director of George Street Playhouse. He has directed 39 mainstage productions at GSP, having most recently helmed this season’s Virtual production of Fully Committed by Becky Mode. Other recent productions directed by Saint include Midwives by Chris Bohjalian and based on the novel Midwives, and Conscience by Joe DiPietro both performed in the inaugural season in the New Brunswick Performing Arts Center.  Other notable productions include The Trial of Donna Caine, American Hero; I Love You, You’re Perfect, Now Change and An Act of God starring the legendary Kathleen Turner in the 2017-18 season. His time here has been marked by collaborations with such artists as Keith Carradine, Tyne Daly, Rachel Dratch, Sandy Duncan, Boyd Gaines, A.R. Gurney, Uta Hagen, Jack Klugman, Dan Lauria, Kathleen Marshall, Elaine May, Anne Meara, David Hyde Pierce, Chita Rivera, Paul Rudd, Stephen Sondheim, Marlo Thomas, Eli Wallach and many others, including a remarkable partnership with Arthur Laurents. In addition, many new award-winning works have begun their life here during his tenure, such as The Toxic Avenger, Proof, The Spitfire Grill, Joe DiPietro’s Clever Little Lies and It Shoulda Been You. He has directed Final Follies at Primary Stages, Clever Little Lies at Guild Hall in East Hampton, NY, and off-Broadway at Westside Theatre, as well as the National Tour of West Side Story. In July 2016, he directed a two-night concert performance of West Side Story at the legendary Hollywood Bowl. In Summer 2019, he directed a revolutionary new production of West Side Story for IHI Stage Around in Tokyo and currently serves as Associate Producer for a new film version of West Side Story directed by Steven Spielberg. He also has directed on Broadway, off-Broadway and regionally at Playwrights Horizons, Manhattan Theatre Club, Primary Stages, McCarter, Williamstown, Seattle Rep, Pasadena Playhouse, Pittsburgh Public, Long Wharf and many others on premieres by writers such as Aaron Sorkin, Wendy Wasserstein, Peter Parnell, Jonathan Marc Sherman, Joe DiPietro and Jonathan Larson. He is the recipient of the Alan Schneider Award, Helen Hayes Award, L.A. Drama Critics Award, several Drama-Logue Awards and is the President of The Laurents/Hatcher Foundation.

LISA ZINNI (Costume Designer) Lisa designed this season's virtual production of  BAD DATES starring Andrea Burns.  Last season she designed the new stage adaptation of MIDWIVES  by Chris Bojalian for George Street Playhouse and worked with Artistic Director David Saint designing the groundbreaking production of West Side Story at the IHI Stage Around in Tokyo. Broadway Credits include FREESTYLE LOVE SUPREME ,  Associate Costume Designer for School of Rock, CATS, An American in Paris, The Play that Goes Wrong, The Glass Menagerie, RENT and HAIR.  Additional Design Credits include  Remember our Song, a new work created and choreographed by Andy Blankenbuehler for the Tulsa Ballet. Lisa has designed for over  20 Seasons with The Pennsylvania Shakespeare Festival and The Orlando Shakespeare Theatre. Favorite productions include: Evita, Shakespeare in Love, Sweeney Todd, Macbeth and Pericles.  Lisa has also designed regionally and Off Broadway; venues include The Round About, 59 E 59th, Ars Nova,  TUTS, Walnut Street Theatre, Riverside Theatre in Vero, Two River Shakespeare, Bristol Riverside Theatre, The Arden theatre company. LISAZINNI.com

George Street Playhouse  - Under the leadership of Artistic Director David Saint since 1997, and Kelly Ryman -- Managing Director since 2013, the Playhouse produces groundbreaking new works, inspiring productions of the classics, and hit Broadway plays and musicals that speak to the heart and mind, with an unwavering commitment to producing new work.  As New Brunswick’s first producing theatre, George Street Playhouse became the cornerstone of the revitalization of the City’s arts and cultural landscape.  With its 45-year history of producing nationally renowned theatre, the Playhouse continues to fill a unique theatre and arts education role in the city, state and greater metropolitan region.