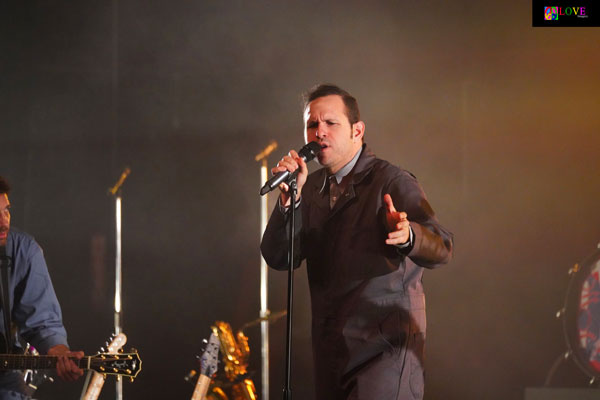 Few artists in the Garden State have ever had the vision or talent of Remember Jones - a true performer in every sense of the world.  From creating star-studded concerts playing complete album takes for celebrated releases by Joe Cocker, R. Kelly, Jeff Buckly, and Amy Winehouse; performing for years in Glen Burtnik's Summer of Love shows; acting in musicals like Jekyll and Hyde, Hair, and Hedwig and the Angry Inch; hosting an Internet talk show during COVID; to his own original music.  He's ready to create a new album of original music and is seeking help from the community with an IndieGogo crowdfunding campaign, which runs until May 17.

On the crowdfunding page, he writes, "We have all been through a year together that has dramatically changed us all. I am thankful to have maintained my health but, as many musicians and artists have experienced, I lost nearly an entire year of my typical performance income. Music venues and musicians alike have struggled to stay afloat and come up with creative ways of connecting to their fans and audiences. It has been challenging to grow in this time but, for myself, I have found many new musical inspirations and confidants. The past 13+ months have allowed me to explore my musical tastes and connect with fellow musicians I've always wanted to create with.

"I am amidst working on a brand new Remember Jones album. I have written or co-written every song on this album, working alongside many musicians and collaborators in and out of studios. Though I've released two albums before, this would be my first, completely original, STUDIO album release. i am EXCITED! nervous! scared! HYPED! ALL THAT!"

"I have vigorously toured my past original music and original contributions, as well as my theatrical presentations of the music of Amy Winehouse, Queen, Joe Cocker, Kanye West, Jeff Buckley and more. These experiences have introduced so many people to my music and my style of entertainment; this new album hopes to broaden that base and to bring me to places I have yet to see."

The crowdfunding campaign will allow him to pay the musicians, producers, engineers, studios, and designers part of the album project. Remember Jones takes pride in creating the highest quality work. After losing the revenue he would have made from touring in 2020 and most of 2021, the funds are sorely needed to accomplish his goals.

Perks for the campaign range from copies of the CD and vinyl (for donations from $20-$30) to special thank you videos, being listed in the album liner notes, an invite to a listening party at his house, on up to a private concert for the most die-hard fans.

This is the second time Remember Jones has turned to an IndieGogo campaign. In 2016, he raised $20,000 to help create the debut Remember Jones album.  That campaign exceeded its original goals.  This time around, he's hoping to raise $35,000.  Click here for the campaign page to support him.

"As a music lover, you may already know that the industry is very tough on independent artists. Most listeners resort to streaming their music which does not fairly pay artists. Touring, which has been non-existent for the past year +, is the best way to connect with fans and new audiences and the best way to sell merchandise. One of my greatest pleasures is personally signing a vinyl that someone has bought at the end of a show. They may never know the work that went into creating that piece of art but they are trusting ME and my musical confidants with purchasing this addition to the home music library. It makes me feel so lucky in those moments!"