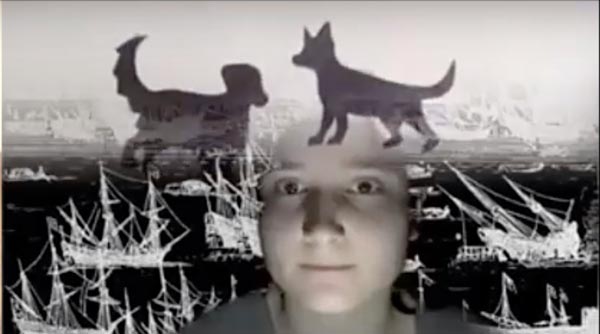 (Princeton, NJ) The Lewis Center for the Arts’ Program in Theater at Princeton University in collaboration with Fordham University, Purchase College, and University of Massachusetts-Amherst will present A Passage in Relief, a virtual theatrical response to Naomi Wallace’s play One Flea Spare.  The production, devised, written and performed by the students and led by Princeton faculty member Elena Araoz, will be performed live April 26 at 1:30pm and 8:00pm.  The event is free and open to the public and will be open captioned.

Audiences will be invited to view and contribute to a living online image and chat board starting a week before the performances.

Wallace’s play, about strangers quarantining together during London’s 17th-Century Great Plague, provoked this wild artistic departure about our own communities’ social iniquities, abuses of power, classism, racism, fake science, and questions about who can afford to survive a plague and the boundaries of gender and the body.

Wallace’s play, the launch point for the new work, takes place in 1665 London as the city spirals toward disaster during the plague. A wealthy aristocrat and his wife remain under quarantine inside their lavish home. In the middle of the night, two intruders break in and demand food. In the ensuing days, all behave according to their expected roles. Yet, as time drags on, the boundaries that defined life previously are rewritten and abandoned: the master and the servant switch status and gender roles blur. In this gripping drama, Wallace mines the social mores of Elizabethan times. The result feels like an ultimatum, urgent and intense, and eerily similar to the present moment.

A Passage in Relief is part of the larger One Flea Spare Project spearheaded by Tony Award-winning designer Clint Ramos at Fordham and part of an intercollegiate spring course of the same name. Students from all four universities spent the semester together virtually under the guidance of Araoz and Percival Hornak, an M.F.A. candidate at the University of Massachusetts-Amherst, who serves as dramaturg. Throughout the course, the students studied Wallace’s play, explored adaptation, conducted research on plague history and on a number of issues, including the racial inequity made evident by the COVID pandemic. They created a series of individual scenes interwoven with common characters and design elements such as puppetry. Over the past few weeks, the team has organized the individual works into a dramaturgical whole for the live broadcast.

The students in the course include both theater and non-theater students with many bringing an interest in social justice issues to the project. Other activities of the year-long One Flea Spare Project included webinars with guest artists and a two-part playwriting workshop with Naomi Wallace and Daniel Alexander Jones , a performance artist, writer and theater-maker, whose performance alter-ego, Jomama Jones, has been at the center of several of his works, including Black Light, a critically acclaimed performance piece commissioned by Joe's Pub's New York Voices program. Students and faculty from Georgetown University also participated in some of these activities.

Starting about a week before the show and up to the start of each performance, audiences will have an opportunity to interact with and explore dramaturgical material through a virtual conversation board.

The project is one of many that Araoz has been leading, directing or involved in this past year under the aegis of the Innovations in Socially Distant Performance (ISDP) project. Anchored by a website - the project has spent the past year during the challenges of the pandemic studying the aesthetics, philosophies, tools, and artists who are transforming the fields of virtual live performance and socially distant productions. The website has been updated continually as a place to create community, share information, inspire invention, and document the expanding art form, with an emphasis on sharing the tools and techniques of a reimagined trade. ISDP was recently selected to be archived by the U.S. Library of Congress in the Coronavirus Web Archive of select web-based evidence to document the effect of the coronavirus pandemic on every aspect of American life and communities. ISDP and the Lewis Center are partners with McCarter Theatre, Princeton University Health Services, and The 24 Hour Plays on The Manic Monologues, which brings to life true stories – experiences submitted by resilient people across the world living with mental health challenges – and what they have to say about struggle and pain, and also triumph and joy.  The project, conceived and directed by Araoz, has recently been nominated for a Drama League Award. Araoz manages the ISDP project with Princeton students Miranda Allegar, B.T. Hayes, Minjae Kim, Reed Leventis Katharine Matthias and Kate Semmens.

Araoz has also directed a number of productions that explore the new frontier of socially distant performance including a farm for meme by Virginia Grise with Cara Mia Theatre, allgo, and a todo dar productions, which was Howlround Theatre Commons’ most watched production. She has directed the world premiere of the virtual opera Alice in the Pandemic by composer Jorge Sosa and creator and librettist Cerise Lim Jacob, also selected for the Library of Congress Archive.

Araoz is a lecturer in theater in Princeton’s Program in Theater and teaches courses in acting, directing and theater-making. As a director of theater and opera, as well as a writer and actor, she works internationally, Off-Broadway and across the country. The Latinx Theatre Commons named her creation of Two Arms and a Noise as one of "thirty-six plays and writers that everyone should know;” the piece most recently played in Bucharest, Romania. The New York Times has praised Araoz's productions as "striking," "primal," "wild," "stirring," and "refreshingly natural;" The Boston Globe as "riveting," "dreamy," and “vivid;” and The New Yorker as “refreshing.” Time Out New York mentions, “Elena Araoz is a director with deep wells of imagination; she seems drawn to magical realist work.” She is a New York Theatre Workshop Usual Suspect and the Drama League’s inaugural Beatrice Terry Artist-In-Residence.

In addition to Araoz and Hornak, other members of A Passage in Relief production team include Paul Deziel as visual designer and broadcaster, Nathan Leigh as sound designer, Carmelita Becnel as stage manager, and Princeton alumnus Victoria Davidjohn. who served as teaching assistant for the course.

The livestream will be open captioned.

To learn more about this event, the Program in Theater, and the over 100 performances, exhibitions, readings, screenings, concerts, and lectures presented each year at the Lewis Center, most of them free and this year virtual, visit arts.princeton.edu.

PHOTO: A rehearsal image of one of the scenes from A Passage in Relief showing performer Kate Semmens. Photo credit: Courtesy of the project team