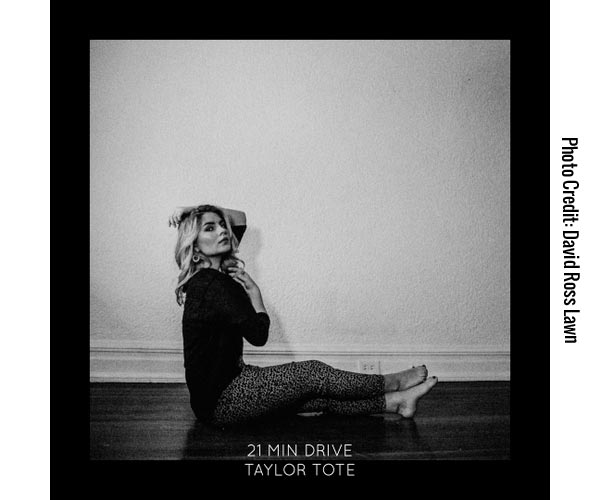 In late March, Taylor Tote released an EP called "21 Min Drive" -  a collection of contemporary songs unlike any of Tote’s past work. Joining forces with producer and songwriter, Russell Hayden, the EP delivers a new and exciting sound for Tote.

With their first collaborative project, they've brought together a unique blend of modern pop, R&B, dance, and electronic music for an EP. Each song details Tote’s emotions and her ability to express that through her music. "21 Min Drive" was recorded remotely, engineered by Hayden and Tote, and written and produced over the course of three weeks.

New Jersey Stage caught up with Taylor to learn more about the EP, writing with Russell Hayden, and what it was like to put together this EP remotely.

This release showcases songs very unlike the music you've put out before.  Do you see this as moving into a new direction or expanding your musical styles as a whole?

I think a little bit of both!  This is actually a style of music I've always wanted to do since the early stages of my career but the flow took me in other ways first.  I think I needed to go the rock/soul route first to realize the diversity in my voice, approach, songwriting, and performance.  I think it's really helped me grow more and made me more of a professional that way.  I learn something new with every project and it makes me better as an artist and as a person.

Are these songs inspired by any artists you're currently listening to? Has your own musical taste changed or are you just showcasing a different side of your interests?

Sort of, yeah!  Dua Lipa was an influence for this project.  I've always been told I sound a little like her and I'm really into her retro sort of throwback vibe.  She's doing a lot of cool things in pop that others aren't.  But my musical taste definitely hasn't changed, this is just the other side of me for sure.  It's funny actually, people keep saying, "This is so different for you, this is so unlike you!"  Whereas Russell said, "This is the most 'you' thing you've ever done, for as long as we've been friends this is the direction you've always wanted to go in."  I think it's more of a shock factor for my listeners because the approach to a lot of my music wasn't always executed entirely the way I wanted whereas this project was fully on a clear straight path to pop.

What was it like working and writing with Russell Hayden?  How did you get involved with him?

I love working with Russell SO MUCH!  We met at a show several years ago and became really quick friends.  I started off collaborating on a lot of his projects, writing certain lines or sections to his songs, singing on them etc.  He has a whole album and I show up on like 75% of it!  After that, he really wanted to focus on his role as a producer and songwriter for other artists and because we're such great friends, he wrote a song for me based on a conversation we had about something we were both kind of going through.  He was like, "Ok, I wrote this song for you about what we talked about the other day and you're going to sing it."  That's kind of how the EP was born.  It was one song, then two, and then I thought, "We're on a roll, let's just do another two and release an EP!"  It happened really fast.

Finally, what was it like putting these tracks together remotely?  Are you looking forward to recording in a more traditional studio setup in the future or did you like the remote process?

It was so interesting doing this remotely.  I wasn't entirely sure of how it was going to work.  The whole thing was over Zoom, FaceTime, phone calls, text messages, voice memos.  We talked multiple times a day, everyday for about a month.  I love working in a studio and would prefer to go in every single time but it's also really amazing knowing that if we needed to just get a quick take of something, we can hop online and do it.  It's really convenient and a really awesome thing I'm excited I learned in this process!

Track 1 “Selfish” - “ Selfish” is a modern Disco Pop track. It’s about dealing with a friend who is consistently choosing themselves over others, and the frustrating emotions that can arise.

Track 3 “Atypical” - “ Atypical” is a Pop Dance track. “Atypical” is about finding your confidence, even if you don’t fit into the stereotypical molds of society.

Track 4 “Flawless” - “ Flawless” is an R&B track. It is about recognizing internal faults, while maintaining the ability to stay independent. “Flawless” features a 25 piece string orchestra, recorded in London, England.

Taylor Tote has made quite a splash in the NJ music scene in a few short years. The 25 year-old Jersey Shore native is mesmerizing, with her unique, upbeat, and soulful original songs. Currently residing in NYC, Tote grew up in Tinton Falls, New Jersey with her fun-loving family. When Tote is not performing, recording, or writing she is at Marymount Manhattan College studying Media and Arts Management, Social Entrepreneurship, and Music Industry. Tote’s intense schedule is surrounded by music, there is no doubt that music is Tote’s passion and what she was born to do. This really becomes self-evident that she is self-aware and possesses a unique brand of stage presence that goes far beyond the stage itself.