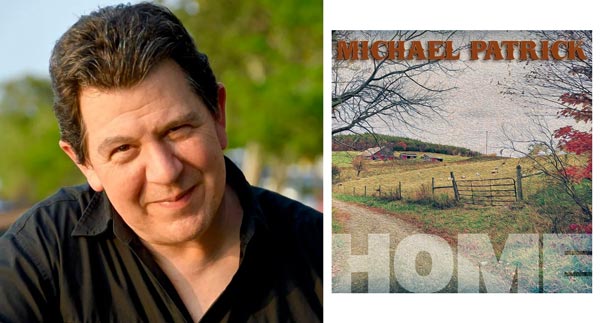 There is an old saying about home being where the heart is, and Jersey’s favorite country boy welcomes us into both with his latest, and certainly most endearing CD, HOME. As the world has seen dramatic changes in the two and a half years since Michael Patrick's last release, John Wayne Movies, so has Michael who moved from a place in the suburbs out to the real country.

As Michael puts it, “Going from an area with a bank or drug store on every corner, smack down in the middle of every major highway. To a rural area on the west coast of New Jersey along the Delaware River.” He jokes, “That his neighbors are now cows and horses!” His new digs have influenced the tunes on this new CD, “There is definitely some serenity in a view of a mountain with my morning coffee while listening to roosters crow.” Michael sings of how his new country digs have won his heart in the new tune By the River.

Patrick's latest recording, HOME is his fifth studio release, and includes fourteen Nashville and New Jersey produced tunes. As one might also guess from its title, it tells the story of a musician and a pandemic. What did you do during quarantine? Michael Patrick made a CD. His weekly "therapy sessions" consisted of spending time in the recording studio laying down new tracks.

Last Day of the Year talks about the trials and tribulations of 2020, and we can all relate. Whiskey and My Guitar describes the new musician's world of entertaining the masses via Facebook live and Zoom, with the added perk of sipping a 12-year-old whiskey neat from the confines of one's music room.

No introspective would be complete without revisiting those tunes one wrote in high school. Is it Heaven? Just a Memory, and All Over Again, are all songs that Michael says he, “Finally got finished, and came to life some 38 years later!”

Some new, original pieces that Michael is particularly proud of, and believes will offer a, “more commercial appeal and radio friendly sound,” include the title tracks Home, The Good Things, Whiskey and My Guitar, as well as the re-released crowd-pleaser Incomplete. Which has been described as, “Zac Brown Band meets George Strait.”

Of course, it wouldn't be Michael Patrick, the man known for his rousing live rendition of Don't Touch My Willie, if there wasn't some fun stuff in the mix. There is a remake of Hard Luck Woman by KISS, that Michael dares you to listen to and say it's not one of the best ballads you'll hear all year. And if you're not swaying along to his Nice to be With You by Gallery, then the pandemic has done a number on your soul. And let’s not forget the tale of when his high-school band broke up, Michael wrote the song Playin’ with Myself to recall the days he had to perform solo.

While many other musicians were forced to take a break this past year, Michael considers himself lucky to have had weekly solo gigs at many different socially distanced / Safe outdoor and indoor events during the pandemic. Delivering a combination of cover tunes and original songs at venues that ranged from Wineries, outdoor restaurant tents, Breweries and pubs have helped to keep his creative juices flowing along with writing and recording this new project.

Unlike years past, there won't be a series of large "in-person" CD release parties until at least late summer early fall. However, the future is looking up with some cool shows on the horizon including a high school field concert with American Idol finalist and country recording artist Crystal Bowersocks. This event will take place in Woodbridge, NJ on Wednesday, July 14th.

HOME will be available for purchase at performances and through iTunes, Amazon, Google music, Spotify, and more. Michael's website, includes tour dates, news, photos, video and audio clips, and Facebook.

Michael will be hosting a Virtual CD Release Party for HOME via Facebook Live on Saturday, April 24 at 7:00pm ET. There will be giveaways, contests, Q&A's and more!

While there may not be any physical hugs, handshakes or bumping shoulders while making your way back to the bar for another beer and shots for your table, there will be interactive songs, stories, comments and emoticons along with a virtual tip jar and Merchandise sales including the New CD!

Michael also released a special digital download of a live performance at the Stone Pony from 2018, tied to the release of his last CD John Wayne Movies. That download is available here.