"The History of Stand-Up: From Mark Twain to Dave Chappelle" 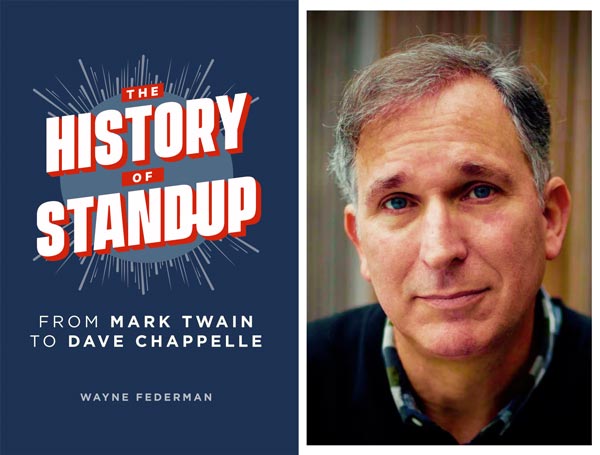 After more than three decades in the comedy industry, Wayne Federman has emerged as one of stand-up comedy's leading cultural historians. He hosts the acclaimed History of Standup podcast, teaches stand-up history and performance at the University of Southern California, and is currently co-producing HBO's upcoming George Carlin documentary with Judd Apatow. Wayne's new book The History of Stand-Up: From Mark Twain to Dave Chappelle was released on March 15.

Today’s top stand-up comedians sell out arenas, generate millions of dollars, tour the world, and help shape our social discourse. So, how did this all happen? The History of Stand-Up chronicles the incredible evolution of this American art form – from its earliest pre-vaudeville practitioners like Artemus Ward and Mark Twain to present-day comedians of HBO and Netflix.

Drawing on his acclaimed History of Standup podcast and popular university lectures, Wayne Federman guides us on this fascinating journey. The story has a connective tissue – humans standing on stage, alone, trying to get laughs. That experience connects all stand-ups through time, whether it's at The Palace Theater, the Copacabana, the Apollo, Mister Kelly’s, the hungry i, the Improv, the Comedy Store, Madison Square Garden, UCB, or at an open mic in a backyard.

Wayne Federman is an Emmy-nominated stand-up, actor, author, professor, and podcaster. Wayne has been a touring comedian for over 35 years and has multiple appearances on The Tonight Show as well as his own stand-up special on Comedy Central. He co-produced the Emmy-winning documentary The Zen Diaries of Garry Shandling and is currently co-producing a George Carlin documentary for HBO. He hosts the acclaimed History of Standup podcast and has been teaching stand-up history and performance at the University of Southern California since 2017.

Wayne has acted in numerous films and TV shows, most notably his recurring role on Curb Your Enthusiasm, as well as Legally Blonde, Knocked Up, Step Brothers, The 40‐Year‐Old Virgin, 50 First Dates, Funny People, Silicon Valley, Shameless, The Larry Sanders Show, Community, and The X-Files. He co-wrote the sports bestseller Maravich: The Authorized Biography of Pistol Pete.