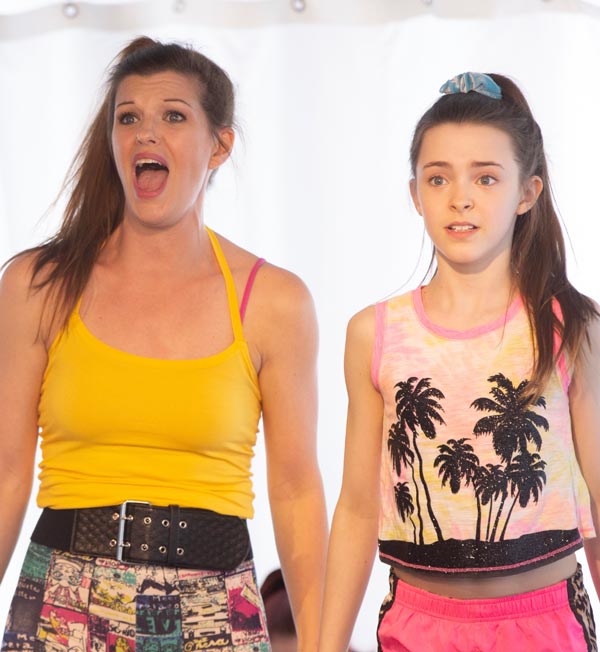 Nothing can keep you down. No man. No woman. Not even a global pandemic! The creators of Spandex The Musical, a new original musical inspired by the viral video of the 1988 Crystal Light National Aerobics Championship, are producing a new audio musical from quarantine! While the cast connects in a virtual Zoom world, cast members record themselves from their respective home studios all over the country. These recordings of the full script and score will be mastered into a full audio-musical told episodically in podcast format.  Drama Desk Award Winner Lisa Howard and Catherine Ashmore Bradley have joined the cast and helming the sound team is Tony-Award winning Sound Designer Kai Harada.

Spandex The Musical tells the story of Lorraine Stubenski, the favorite to lead the U.S. in the 1968 Mexico City Olympics, until something goes terribly wrong.   Twenty years later, in a society of budding conference call technology, changing roles in the home, and a new sport fist-pumping its way across the nation, Lorraine finally faces her inner demons, as well as a cruel, mulleted fitness king, Trip Allen, in the only place she may find redemption: the 1988 Crystal Light National Aerobics Championship, hosted by Alan Thicke.

“I think audiences  will love the trip back to the 80s and remembering how earnest we all were—have you seen the Crystal Light videos?” says co-creator Daniel F. Levin, “but these are also characters people will connect with and believe in.  When it comes to the music, there’s actually a huge overlap between 80's music and Broadway.  The songs are all over the top, emotionally intense, filled with great hooks, and widely ridiculed (even though everyone secretly loves them!)  What I love about the audio musical format is that audiences from around the world that may not have been able to get to a theatre will be able to hear the score and relate to a story of people being broken down but coming together and finding a purpose--while having a lot of laughs along the way!”

He added “I don’t think audio musicals are just something that will help get us through this pandemic.  I think they are about to become a big force in the musical theatre world.”

Spandex The Musical  premiered Off Broadway in 2013, performed at the Minsky Theatre in Minneapolis in 2017 and held a 29-Hour Equity Reading in 2018. A special audio performance of the entire script and music will stretch around the world in April 2021.