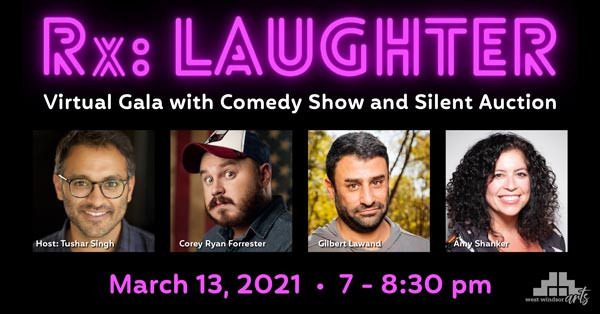 (PRINCETON JUNCTION, NJ) -- West Windsor Arts Council is serious about its mission to transform lives through the arts, which is exactly why it is hosting a virtual comedy show on Saturday, March 13th as its Annual Gala and Art Auction for 2021. The nonprofit chose humor as the theme for the event because in times like these, we could all use a good laugh.  The event runs from 7:00pm to 8:30pm.

“Rx: Laughter” is part fundraising gala, part stand-up comedy hour and part art auction, a lineup that was carefully chosen to keep the presentation moving in a fun yet healing way.  “When we laugh, we release feel-good endorphins, which can reduce stress,” says the art center’s Executive Director, Aylin Green.

“We are really excited about this show. Tushar tells funny stories that we can all relate to, with themes ranging from career crisis and rejection to cultural identity and self-realization. His stories about growing up as an Indian-American in Huntsville, Alabama, will resonate with just about anyone who has ever felt they didn’t fit in at some point in their lives,” adds Green. He is also a talented artist, with family connections to West Windsor, and will be offering a commissioned artwork as part of the art auction.

The art auction includes an impressive lineup of artists, who are contributing work in various sizes, mediums and price points. There will also be a selection of specialty themed baskets featuring popular goods and services you can use now. Anyone can participate in the art auction. No ticket required. Bidding begins on March 8th and ends March 13th at 8:45pm.

Bistro Boxes, in partnership with the West Windsor Community Farmers’ Market, will also be on sale, so you can enjoy a delicious, healthy, locally sourced, meal without having to worry about cooking. Each Bistro Box, priced at $50 for two, contains goodies from Forkin’ Good Nuts, LoRe Pasta, Little Radish and Terra Momo Bread, as well as a drink recipe, plating challenge and event swag.

Tushar Singh is a stand-up comedian based out of New York City. Since starting in New York in 2005, he has performed at top clubs in NYC and LA, including the Upright Citizens Brigade Theatre, Westside Comedy Theater, Punchline SF and Gotham Comedy Club.

Gilbert Lawand helped usher in an Atlanta comedy boom by producing and hosting over 300 shows called “Comedy Gold.” He has opened up large theater shows for such noted comedians as Dave Chappelle and Aziz Ansari. His comedy is a mix of social commentary and satire.

Amy Shanker grew up with “the looks of a prepubescent Latino boy” and a family dubbed among her friends as “the Jewish Griswolds.” She has a dry, edgy comedic style and is a regular at Laugh Factory, Zanies and The Stand NYC.

Corey Ryan Forrester has been writing and performing stand-up comedy since the age of sixteen. He has been featured on ABC, HBO, BBC, Esquire and Forbes magazine and is a contributor for The Huffington Post and The Bitter Southerner.