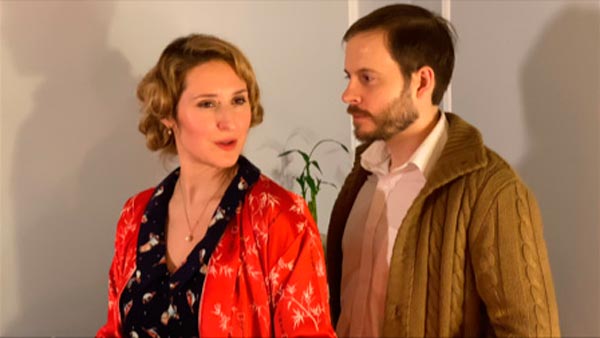 (CAPE MAY, NJ) -- East Lynne Theater Company presents a staged reading of "Enemies," written by married couple Neith Boyce and Hutchins Hapgood, for free, on YouTube. With clever dialogue, the play explores a "modern," nontraditional, non-monogamous marriage.  "Enemies" premieres on Thursday, March 4 at 8:00pm and will be available anytime ​through 11:59pm on Sunday, March 7 on ELTC's YouTube Channel.

It was on the veranda of Hapgood and Boyce's rented cottage in Provincetown, MA on July 15, 1915, that the groundbreaking Provincetown Players presented its first evening of one-acts. Under another husband-and-wife team, George Cram Cook and Susan Glaspell, the Players moved the plays of Eugene O’Neill, Glaspell and others to New York City from 1916 – 1922. "Enemies" was originally performed by Boyce and Hapgood for the Players.

This is not a Zoom performance, but a fully-staged reading, with costumes and props, that was filmed in a Manhattan apartment where the two performers, Veronique Hurley and Mat Labotka, have been sequestered. The director, James Rana, rehearsed the couple via Zoom, and Hurley is the editor. "Enemies" premieres on Thursday, March 4 at 8:00pm and will be available anytime ​through 11:59pm on Sunday, March 7 on ELTC's YouTube Channel. ELTC strongly recommends that it be watched directly on YouTube on a flat screen tv, or that the computer be connected to the tv with an HDMI cable, so "Enemies" can be seen on a larger screen with better sound, and even use Closed Caption if needed.  It's free, but donations are appreciated and may be made online.

Veronique Hurley has performed in several ELTC productions, and she and Mat Labotka were both in "The Rainmaker" and the virtual "Historic Spout Offs." During the pandemic, they started a comedic podcast, "Grumble Goat," about grumbling about trivialities. Hurley's Off-Broadway credits include "The Tempest," "As You Like It," "Twelfth Night," and "Hunting and Gathering" at The Glass Eye. Regionally, she's performed at The Hartford Stage Company, Cape May Stage, and Playhouse on Park. Labotka is an alum of Chicago's Second City Conservatory whose New York credits include Henry in "The King's Face," Albert in "Relativity of Love," and Victor in "The Star and The Fire."  He also performs in commercials, improv and stand-up comedy.

James Rana, the director, is also an actor and a playwright, who has worked with theaters throughout the country, including ELTC, where he recently starred in "Nothing Matters," a fully-produced production that was filmed during the pandemic. In the fall of 2017, he began rehearsals for Broadway's "The Band’s Visit," and performed several times in the role of the Band's Leader, originally performed by Tony Shalhoub, and other roles.  When this Tony Award winning show closed on Broadway in April 2018, he began performing in The National Tour, which has been on hiatus since mid-March 2020.

Until ELTC can once more provide live performances in the summer, they are offering virtual events on YouTube. Currently, "A Speech by Ida B. Wells" is available for free through February. From February 25 – 28, it's "Get Happy! A Cabaret Salute to Judy Garland" for a $15 ticket. From March 18 - 21, for free, is "Something to Vote For" by Charlotte Perkins Gilman.