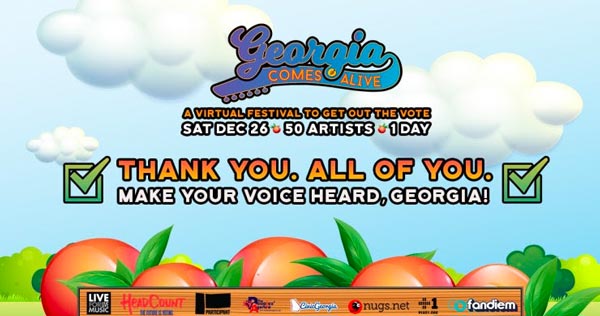 On Saturday, December 26th, Live For Live Music in partnership with HeadCount presented Georgia Comes Alive. The one-day virtual music festival presented performances by 50+ artists and aimed to promote voter participation in the upcoming Georgia runoff elections, taking place January 5th, 2021. Conceptualized to support local grassroots organizations like Georgia Coalition for the People's Agenda and CivicGeorgia, the event garnered over one million viewers, and raised over $170,000 through 8,000 individual donations (averaging $20 per donation).

The event, powered by Nugs.net and Plus1, was the latest virtual festival from the team behind Democracy Comes Alive, Quarantine Comes Alive, and Justice Comes Alive, events which collectively raised close to $300,000 for various charitable causes and garnered nearly two million views.

Americans turned out in record numbers to vote during the 2020 elections, largely thanks to dedicated activism of grassroots organizations and the historic participation of underrepresented communities in battleground states like Georgia. Neither Georgia Senate seat garnered the 50%+1 majority vote during the general election, triggering a runoff election set to take place January 5th, 2021. While the Georgia runoffs will be decided by local voters, the results will have national implications by deciding which party controls the Senate.

“Georgia Comes Alive was a work of art encapsulating the year 2020 for live music that I believe will go down as a defining moment of this period," shares the founder of Live For Live Music and the Comes Alive event series, Kunj Shah. "The artists put so much creativity, time, and precaution into recording these segments during a pandemic—whether from their own homes, by sending each part to one another remotely, carefully playing outside six feet apart with masks on, or in empty venues around the country observing safety measures like COVID testing and masking for video operators. We will hopefully never need to host an event in this manner again, but in the context of rock and roll history, Georgia Comes Alive will be remembered as the embodiment of the fortitude of live music during this unprecedented time."

"This was an amazing end to a challenging but unforgettable year," adds HeadCount co-founder and executive director, Andy Bernstein. "Each of the livestream performances were unique moments in history. The artistry was really apparent in each segment—the musicians really put their hearts into every performance—and the cause itself was at the forefront. I hope every viewer got a sense of the grassroots organizations getting the vote out in Georgia and why they are such worthy recipients of the charitable funds raised."

Georgia Comes Alive was produced by Kunj Shah (founder, Live For Live Music), Don Strasburg (president, AEG Rocky Mountains), and Paul Peck (president, Fandiem; co-founder Okeechobee Music Festival, formerly Bonnaroo) in partnership with HeadCount, the non-partisan organization focused on voter empowerment. Committed to promoting involvement in democracy, HeadCount uses the power of music to register voters, reaching both young people and music fans where they are. Since 2004, it has registered over 600,000 voters through partnerships with touring musicians like Ariana Grande, Dead & Company, and Beyoncé, to name a few, at events like Lollapalooza, Bonnaroo and more.