Makin Waves Song of the Week: "Not for Sale" by Blaise 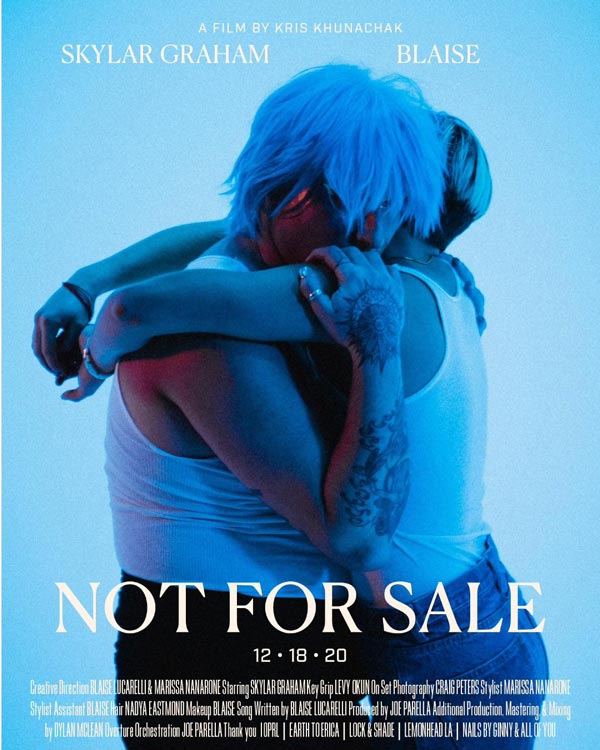 “Not for Sale” is a new single by Blaise co-written with and produced by former Deal Casino frontman Joe Parella and video directed by sought-after videographer Kris Khunachak. Makin Waves premieres the clip at New Jersey Stage having done the same with the single earlier in the week on “Radio Jersey” at The Penguin Rocks. PHOTO BY CRAIG PETERS

With his latest video, “Not for Sale,” Asbury Park singer-songwriter Blaise and his team tell the tale of a queer love story.

Featuring a spoken-word intro that glides into a soulful George Michael-like dance track, “Not for Sale” is the artist’s latest single from a 2021 album, his fourth. As the Song of the Week, Makin Waves is honored to premiere the video of “Not for Sale”:

Also as the Makin Waves Song of the Week, “Not for Sale” can be heard 5 and 11 a.m., 5 p.m., and midnight through Thursday at ThePenguinRocks.com and 6:45 p.m. Friday and Monday on its “Radio Jersey” show.

Lovingly and expertly lensed by Kris Khunachak throughout Asbury Park and 10PRL Studios in Long Branch, the video follows many works by the videographer-photographer. His resume includes such local acts as Shred Flinstone, America Part Two, Latewaves, With Sails Ahead, and Connor Bracken and the Mother Leeds Band.

Like Blaise’s 2018 sophomore LP, “Velvet Noir,” the single and its forthcoming album, Silver Linings Only, were co-written with and produced by Joe Parella, the former frontman of Deal Casino now pursuing a solo music career. The LP’s second single will be released early next year, Blaise said.

“Joe and I have been working for the last two years on a follow up to ‘Velvet Noir,’ he said, “expanding on subjects and sounds, creating tons of music and demos. A pandemic and a heartbreak set us into high speed into the exact direction we were searching for.”

Additional production, mixing, and mastering was by Dylan McLean, a staff engineer at Lakehouse Recording Studios in Asbury.

“My art is founded on both sonic and visual art, so a corresponding video was not only an obvious choice, it was imperative to its full realization,” Blaise said. “Directed by Kris Khunachak, with creative direction by myself and Marissa Nanarone, and starring Skylar Graham, the film tells the story of the song. It speaks on the themes of the fluidity of love and memory, and how these both intersect and inspire life.

“It was important to me to create a queer love story where the central conflict wasn’t the characters dealing with coming to terms with being queer or tackling the world’s opposition to being queer,” Blaise continued. “The story is about two queer characters having this beautiful loving and passionate moment, and trying to hold onto that. I felt compelled to show a queer love story that didn’t end in tragedy but with hope.”

For Blaise, 2021 is going to be a “huge year.” He and Joe P. already have a second album in the works. Both will offer a plethora of visuals, Blaise said.

The new single and video follow a brilliant collaboration between Blaise and David Ross Lawn, who re-arranged much of the “Velvet Noir” to feature only his piano accompaniment. The results produced one of the best albums of the year, as was the original LP in 2018.

Like everyone in the virus-sidelined Asbury scene, Blaise said he’s looking forward to performing as much as possible as soon as possible. In the meantime, he’ll participate with David Ross Lawn in Telegraph Hill Records’ annual Wonderful Year year-end concerts on Dec. 28 and 29 at Asbury Lanes and Danny Clinch Transparent Gallery.

“2020 might have sidelined a lot of things, like touring and bigger shows, but it will never stop me from creating art, and for paving sequin pathways toward the future and success in my cards,” he said.

While that future develops, here’s a look at other videos Blaise has made: