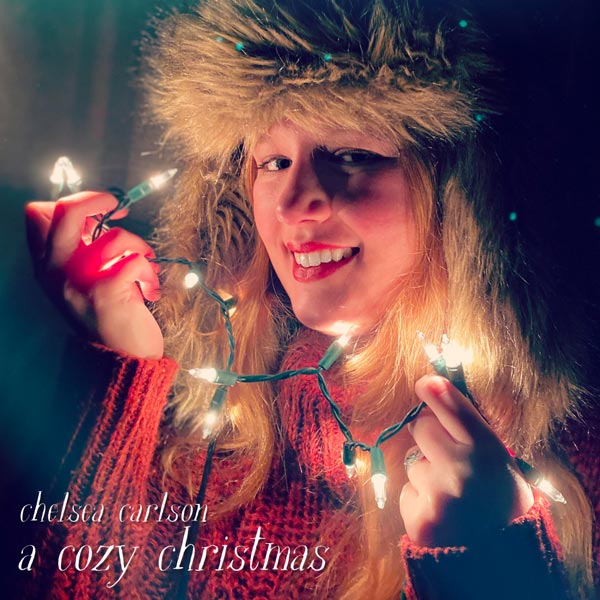 Chelsea Carlson has released her first holiday album A Cozy Christmas, which is available on Bandcamp.  The a singer-songwriter from Mount Olive, New Jersey, produced, recorded, and mixed the album herself. It features eight traditional holiday songs reimagined for 2020 with 25% of the profits earned this year from the album going to Hope's Promise Equine Assisted Activities in Chester, New Jersey.

Chelsea believes these eight traditional Christmas songs are perfect listening material for a cozy December night in your favorite pajamas with a cup of hot cocoa. She hopes listeners will find this collection to be both nostalgic and exciting. The album was recorded in the Zen Zone (Brick, NJ) and is available for $8 or more at Bandcamp.

She returned home to Mount Olive in 2011 after attending Berklee College of Music.  Chelsea began performing throughout the tri-state area and was awarded Top New Female Act at the Jersey Acoustic Music Awards.  Her first album of original music, The Broken Road, was released in 2016. She has played at over 100 venues and festivals with her music played on numerous radio stations across the country.  In addition to this Christmas album, she is currently in production for her folk trio Bardy Pardy's debut album, and in pre-production for her next solo album of original music as well.

In recent years, Chelsea has followed her love of performance on new adventures, including roles in community theater plays such as It’s a Wonderful Life at County College of Morris, short films such as "The Sugartits: A Pop Star Parody," and has been part of the cast of the New Jersey Renaissance Faire for four seasons.  Additionally, Chelsea teaches music lessons in voice, guitar, piano, ukulele, and bass and enjoys opening up the world of music to her students.

Hope's Promise Equine Assisted Activities provides pet therapy style visits to nursing homes and hospitals with their miniature horses, as well as riding therapy and an outreach program for children from underserved communities to develop confidence and self-esteem through work with their horses.