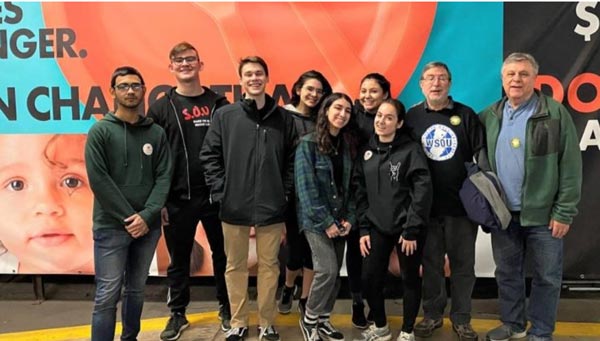 (SOUTH ORANGE, NJ) -- As the holiday season approaches, WSOU 89.5 FM has announced its latest goodwill project with the launch of a GoFundMe campaign to subsidize its annual holiday food drive. Dedicated to supporting the needs of the Community Foodbank of New Jersey, WSOU’s Food Drive is a time-honored tradition at Seton Hall University (SHU). This annual event kicks off the holiday season with the spirit of assisting those dealing with food insecurity.

Traditionally, students from SHU and employees of WSOU collect over 1,000 pounds of food to donate to the Community Foodbank of New Jersey in Hillside, N.J. However, due to the impact of the COVID-19 pandemic, the food drive has switched to an online format. “Realizing the important role WSOU plays in the community, we knew we had to reimagine our annual food drive which helps so many people in need. Adaptability has always been one of our radio’s strengths, which is why our students quickly opted for a more dynamic approach and launched the GoFundMe campaign. Our hope is to make this year’s drive more successful than ever with our innovative approach. Even with the pandemic, we strive to continue our tradition of helping others,” said Mark Maben, general manager of WSOU.

According to The Community Foodbank of New Jersey, for every $1 donated, three meals are provided to individuals in need. WSOU’s goal is to raise $895 through its GoFundMe, ultimately feeding 2,685 people. In New Jersey, nearly one million people require food assistance, with 270,000 of them being children. In New York City, 1.4 million residents rely on emergency food programs, including soup kitchens and food pantries. Since launching seven years ago, WSOU’s food drive through “Students Change Hunger,” has donated more than 3,000 pounds of food to those in need.

In addition to providing “the loudest rock,” the staff and members of WSOU are fully committed to the community and the spirit of giving back. For more information regarding the campaign, please click here.

WSOU is a student-run, award-winning radio station of Seton Hall University. Established in 1986, WSOU has programmed a hard rock format and has become a national leader in college broadcasting after being consistently ranked in the top tier student-run electronic media outlets. Throughout its 71-year existence, WSOU has earned more than 70 industry awards, with the most recent one being the Marconi Award for “Noncommercial Station of the Year.”  In addition, WSOU operates 24/7, producing 8,760 hours of programming and reaching a weekly over the air audience of more than 78,000 listeners.