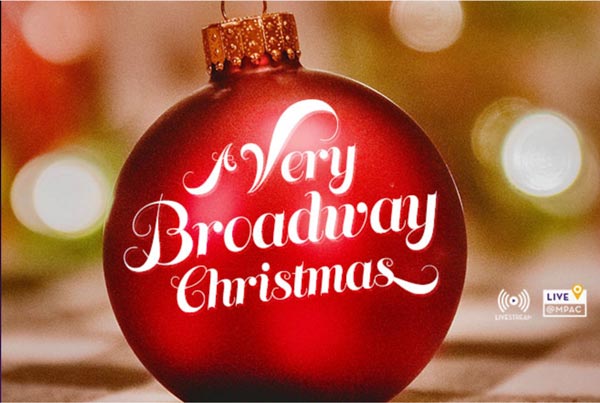 (MORRISTOWN, NJ) -- Mayo Performing Arts Center (MPAC) presents A Very Broadway Christmas on Sunday, December 13 at 3:00pm. The event features Kelli Rabke, Jessica Hendy, and Scott Coulter accompanied by John Fischer.  Due to the pandemic, MPAC can only sell up to 150 tickets for the event in the venue, but it will also be available as a livestream.  Tickets for the event are $29-$59 with the livestream is available for $20.

JESSICA HENDY is widely recognized as one of Broadway’s best belters.  Her numerous Broadway credits include starring roles in Cats (Grizabella), Elton John’s Aida( Amneris) and Amour.  She has toured the US and Canada in both Cats (Grizabella) and Joseph and the Amazing Technicolor Dreamcoat (Narrator).  Her one-woman musical “With Beckett” has a score by Richard Oberacker and Rob Taylor (Bandstand) and is currently in a pre-Broadway workshop. In New York, she garnered rave reviews for her one-woman cabaret, A Life to Call Your Own, and received a Bistro Award for her cabaret debut in the musical comedy revue Get Your Tickets Now. She played Diana Goodman in the regional premier of the Pulitzer Prize-winning musical Next To Normal at The Ensemble Theatre of Cincinnati. Her performance as Jeanne in The Great American Trailer Park Musical at ETC earned her an ACCLAIM Award for Best Actress.  Jessica has had the pleasure of working at many theaters around the country including Pittsburg CLO and North Shore Music Theatre where she starrred in Miss Saigon (Ellen), and the Helen Hayes Performing Arts Center in Songs for a New World with the Tony-winning Jason Robert Brown at the piano. Jessica regularly performs with leading symphony orchestras around the world in a variety of concerts and musical celebrations and travels the country as featured vocalist in several concert events including Broadway Today !and Cinema Toast: The Music of the Movies.  Jessica is a proud graduate of the University of Cincinnati, Conservatory of Music.

KELLI RABKE got her “big break” playing the role of Dorothy in Paper Mill Playhouse’s acclaimed production of The Wizard of Oz. Shortly thereafter, she was handpicked by Andrew Lloyd Webber to play the lead role of the Narrator in the Broadway revival of Joseph and the Amazing Technicolor Dreamcoat.  Following that, she played her dream role: Eponine in Les Miserableson Broadway.  She went on to perform in regional theaters across the country in such roles as Mabel in Mack and Mabel,Christine in The Phantom of the Opera, and back to Paper Mill Playhouse in Stephen Schwartz’s Children of Eden as Yonah.  She is one of the only Broadway starts to originate a role in both a Stephen Schwartz and an Andrew Lloyd Webber musical – a distinction for which she is incredibly honored.  She has been seen and heard in TV commercials and voice-overs, and was the voice of several animated characters, including Kat in the Discovery Channel Kids series Kenny the Shark.  She also played the recurring role of Bernadette on The Young and the Restless. Her proudest accomplishments to date are her son, Joseph, and daughter, Abigale.   Kelli’s time on the board of the BergenPAC in Englewood, NJ led to the development of the Kidz Cabaret series, the BeyondMusic program of instrumental lessons, and her personal favorite: Music Speaks– an early childhood music education class for infants through four years old.  She has sung on numerous CD’s for Music Speaks and served as producer and creative director for Beyond the Storm– a Hurricane Sandy relief concert that raised money for local towns hard hit by the storm.  At NYC’s historic Town Hall she has been seen in numerous concerts including Broadway Originals and Broadway Unplugged.  Kelli was the headliner for the Broadway on the Boardwalk concert in Ocean City, NJ, and performed at Broadway Ballyhoo at the Laurie BeechmanTheatre.  Her solo cabaret debut, No Place Like Home, had its NYC premier at Feinstein’s 54/Below.  Her concert work has taken her all over the world and she couldn’t be happier.

SCOTT COULTER is one of New York’s most honored vocalists. For his work in cabaret, he has received five MAC Awards (Manhattan Association of Cabarets & Clubs), five Bistro Awards and two Nightlife Awards for Outstanding Vocalist and has performed at most of NYC’s top rooms including Birdland, 54 Below, The Oak Room at the Algonquin, and Feinstein’s at The Regency where he spent a record-setting eight months performing the revue 11 O’CLOCK NUMBERS AT 11 O’CLOCK which he also co-created, directed and musically arranged. His self-titled debut CD won the 2003 MAC Award for Outstanding Recording and was chosen as the best recording of the year by TheatreMania and Cabaret Scenes magazines. Scott was director and star of A CHRISTMAS CAROL: THE SYMPHONIC CONCERT in its world premiere with the Baltimore Symphony and reprised his performance in the Emmy-nominated PBS production which premiered in December 2013. He was an Emmy nominee himself for his performance in American Song at NJPAC. Scott regularly performs in concert both as a solo artist and with a variety of legendary performers including Stephen Schwartz, Tony-winner Ben Vereen and Grammy-winner Sheena Easton and has performed with symphonies all over the world including San Francisco, Baltimore, Seattle, Phoenix, Detroit, Winnipeg, St. Louis and Calgary.

Since 1997, Scott has performed with award-winning songwriting duo Marcy Heisler and Zina Goldrich in their many award-winning revues. While singing with Goldrich and Heisler he was discovered by Oscar and Grammy winning composer Stephen Schwartz who then invited him to join the revue STEPHEN SCHWARTZ & FRIENDS. That revue (starring Schwartz and Coulter along with Liz Callaway and Tony Award-winner Debbie Gravitte) has been performing all over the world since 1999. Schwartz has said, “One of the greatest things that can happen to a composer is to have his music interpreted by Scott Coulter.”

Scott is creator, arranger and director of several touring shows (symphonic and non-) including MUSIC OF  THE KNIGHTS, THE WONDERFUL MUSIC OF OZ, BLOCKBUSTER BROADWAY!, and, for The ASCAP Foundation, JERRY HERMAN: THE BROADWAY LEGACY CONCERT. As a director his credits include many shows for The Town Hall in NYC and BROADWAY BY THE WAY for The Berkshire Theatre Festival and Broadway by the Bay. Along with Michael Kerker and ASCAP, he’s a regular producer/director of Michael Feinstein’s STANDARD TIME at Carnegie Hall. Scott recently wrote the book for the new musical GOT TO BE THERE which celebrates the life and music of songwriter Elliot Willensky.

Scott is founder/owner of Spot-On Entertainment and Spot-On Arts Academy and is a resident director of programming at 54 Below (Broadway’s Supper Club) in NYC.  He is the artistic director of the Pocono Mountains Music Festival and a proud graduate of the Cincinnati College-Conservatory of Music.

JOHN FISCHER has been a music director and pianist in NYC for the past two decades. Most recently, he music directed the sold out run at Feinstein’s/54 Below for Tony Award winner Alice Ripley and Tony nominee Emily Skinner’s cabaret show, UNATTACHED, in addition to the live CD recording of the show. He spent six seasonshedny  as the music director for the highly acclaimed musical theatre program at Jacob’s Pillow Dance Festival in the Berkshires. For the past eight years, John has served as music director for the BROADWAY’S RISING STARS and BROADWAY ORIGINALS concerts at Town Hall. He is also a regular fixture at Feinstein’s/54 Below, music directing everything from Sondheim to Schwartz, in addition to the award winning 54 SINGS series (APPLAUSE, MACK & MABEL, KISS OF THE SPIDERWOMAN). Other NY credits include pianist for the recent Broadway revival of WEST SIDE STORY, pianist/conductor for TALK OF THE TOWN Bank Street Theatre, TAKE ME ALONG Irish Rep, NAKED BOYS SINGING New World Stages. Associate MD: AFRICA AND PLUMBRIDGE and ESPRESSO TRASHO NY Fringe Festival, BROADWAY BACKWARDS II & III American Airlines Theatre. Regional Music Director credits include HELLO DOLLY, FUNNY GIRL, THE KING AND I, GYPSY, NO NO NANETTE, THE PIRATES OF PENZANCE, PETER PAN, OLIVER among others. John has had the pleasure of working with such well known artists as Judy Collins, Kate Winslet, Mickey Dolenz, Jennifer Holiday, Michele Lee, in addition to scores of Broadway performers. He has been on staff as a music director or accompanist for Applause NY, AMDA, HB Studios, The New School, The Growing Studio, and the Lee Strasberg Theatre and Film Institute.