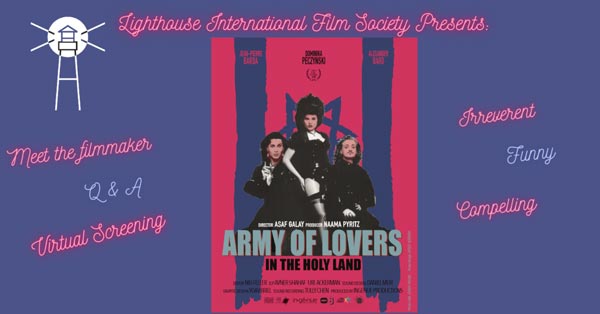 (LONG BEACH ISLAND, NJ) -- The Lighthouse International Film Society offers the opportunity to watch the documentary Army of Lovers in the Holy Land online and join them for a Q&A via ZOOM with director Asaf Galay and Jean-Pierre Barda on Sunday, November 22 at 2:00pm. This fascinating documentary examines home, identity, family and the pull of Aliyah (immigration to Israel). Tickets are $6 for the film and Q&A.

Thirty years after launching into international stardom, queer disco-pop band Army of Lovers embarks on a new chapter when frontman Jean-Pierre Barda uproots his existence to move from Sweden to Israel. A blend of ABBA, the B-52s and performance art, Army of Lovers is still rocking pride celebrations and underground club parties with its mix of high camp, daring music videos and a motto of "More is more, less is a bore." And while Barda's co-members Alexander Bard and Dominika Peczynski are his true family and his entire life has been in Sweden, his Jewish identity pulls him towards change.

The salt-and-pepper-haired charmer gives up his luxurious apartment and fashionable clothes and settles into rollerblading through the streets of Tel Aviv, meeting passionate Israeli men and enjoying hummus in the backyard. But is that enough for a former pop star? Barda is can't-take-your-eyes-off-him enchanting, whether reclining on a chaise in a corset, flowered cloak and thigh-high patent leather boots, or donning tight fatigues while volunteering for the Israeli army. And while many struggle with the seeming paradox of Barda's identity - flamboyant, philosophical and religious all at once - he never doubts who he is.

After purchasing your ticket you will be sent a email confirmation which will include a Vimeo link to screen the film, and a Zoom link for the Q & A.  Tickets are available for purchase here.

The Lighthouse International Film Festival is a nonprofit organization that is dedicated to showcasing new and innovative films and fostering the next generation of filmmakers. The festival offers three days of films, panels, Q&A's, networking, parties and surfing, and draws some of the industry's top film critics, producers and distributors. The festival also seeks to serve the community by presenting unique programs that inspire, engage and challenge a diverse audience through the art of film.