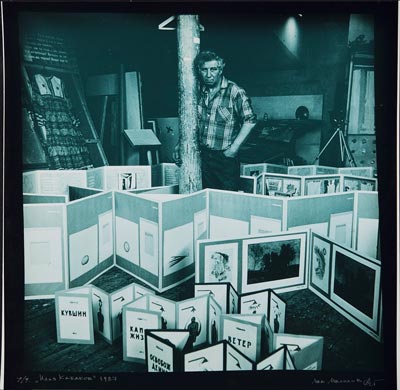 (NEW BRUNSWICK, NJ) --  The Zimmerli Art Museum at Rutgers University welcomes Ann Komaromi, Ph.D., who explores the artistic relationships of Ilya Kabakov and Viktor Pivovarov to both the Russian and Soviet cultural legacy, as well as the western gaze, in a Zoom lecture on December 7 at 5:00pm (ET). The program is free and open to the public. Registration details are available on the Zimmerli at Home Virtual Events page. It is held in conjunction with the recent Zimmerli exhibition Dialogues – Ilya Kabakov and Viktor Pivovarov: Stories About Ourselves.

Ann Komaroni specifically discusses how Ilya Kabakov’s later work — made after his albums — with found “trash” objects in the 1980s is distinct from similar practices by artists like Robert Rauschenberg. Kabakov’s treatment of the theme of trash arose out of the context of late socialism and became, with time, a profound meditation on the relegation of the Soviet Union to the rubbish heap of history. Komaroni is an associate professor in the Centre for Comparative Literature and the Department of Slavic Languages and Literatures at University of Toronto and a Victoria College Fellow.

Following the lecture, an interactive Q&A is moderated by Ksenia Nouril, a guest curator for Stories About Ourselves. She currently serves as Jensen Bryan Curator at The Print Center in Philadelphia. Nouril received a doctorate in art history at Rutgers, where her graduate studies were supported by a Dodge Fellowship, which provided opportunities to conduct primary source research and develop exhibitions from the Norton and Nancy Dodge Collection of Nonconformist Art from the Soviet Union at the Zimmerli.

Dialogues – Ilya Kabakov and Viktor Pivovarov: Stories About Ourselves delves into one of the hallmarks of unofficial Soviet art from the height of the Cold War: the album. It focuses on both Kabakov’s and Pivovarov’s work created in this format, which was an innovative genre of visual art popularized in the 1970s by conceptual artists in Moscow. Drawn from the museum’s Dodge Collection, the exhibition includes some 120 individual sheets and provides a rare opportunity to view several albums in their entirety. Kabakov and Pivovarov each produced dozens of albums, addressing the triumphs and tribulations of their everyday lives in the Soviet Union at the time. The works serve as an inspirational model for audience engagement, telling stories that are at once specific and universal.

Dialogues – Ilya Kabakov and Viktor Pivovarov: Stories About Ourselves was organized by Ksenia Nouril, Ph.D., Guest Curator, with Julia Tulovsky, Ph.D., Curator of Russian and Soviet Nonconformist Art, and Jane A. Sharp, Ph.D., Research Curator of Soviet Nonconformist Art at the Zimmerli and Professor of Art History at Rutgers. The exhibition, accompanying publication, and related programs are made possible with the support of the Avenir Foundation Endowment Fund and the Dodge Charitable Trust—Nancy Ruyle Dodge, Trustee.

Stories About Ourselves is the second edition of Dialogues, the Zimmerli’s series of dual career exhibitions from the Dodge Collection, which is designed to increase historical awareness of the aims and impact of unofficial art in the former Soviet Union by highlighting a particular aspect of it. The inaugural exhibition, Dialogues – The 60s Generation: Lydia Masterkova/Evgenii Rukhin, debuted in 2018.

Please note that the Zimmerli remains closed to the public and in-person programs are suspended until further notice. In the meantime, Visit Zimmerli at Home to experience the museum, wherever you are, whenever you want. News regarding operations will be posted on the museum’s home page. For Rutgers updates, please visit Universitywide COVID-19 Information.

The Norton and Nancy Dodge Collection of Nonconformist Art from the Soviet Union at the Zimmerli Art Museum at Rutgers is the largest and most comprehensive collection of unofficial Soviet art in the world. The collection includes over 20,000 works by more than 1,000 artists from Russia and the Soviet Republics, created from about 1956 to 1986. The collection was assembled by American economist Norton Dodge during his many business trips to the Soviet Union in the 1960s through the early 1970s, and through relationships with artists who later moved to the United States. The Zimmerli provides opportunities to study and exhibit these artworks, which otherwise might have been lost to time and circumstance, as well as position the Dodge Collection in the global dialogue about art, especially its relevance in the development of conceptual art in the 1970s and 1980s.