Makin Waves Song of the Week: "Someone Is Waiting" by Helen O'Shea 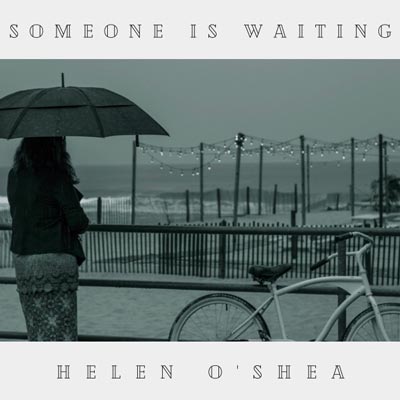 Helen O’Shea has followed her Grammy-considered single and video, “Unbecoming,” with the new single “Someone Is Waiting.” Both will be featured on a 2021 EP produced by two-time Grammy-winner Marc Swersky. PHOTO BY TONY VIRILI

On a Sunday in February 2018, Princeton singer-songwriter Helen O’Shea was getting ready to leave for Rick Winowski's tribute to the late Smithereens front man Pat DiNizio when she received a call about her friend Catherine, the biggest supporter of her "late-in-life" music journey.

Catherine was in the last days of a courageous battle with ovarian cancer, Helen said.

“She was too young, too caring, too funny and too full of life to leave us,” she said. “Even in these last days, her concern was for others, one of the most selfless people I have ever known. I wanted to send her a message over the distance that was just about her, what she was facing, the fears that she did not share, but what do you say to someone who is slowly facing the untimely end of their time on earth? We were late for Rick's event, but I had the first version of this song finished by the time we got there.”

That song, “Someone Is Waiting,” is the Makin Waves Song of the Week and can be enjoyed here:

As the Makin Waves Song of the Week, “Someone is Waiting” can be heard at 5 and 11 a.m., 5 p.m., and midnight through Thursday at ThePenguinRocks.com and 6:45 p.m. Friday and Monday on its “Radio Jersey” show, which premiered the song earlier this week.

However, Helen has been performing the song live since shortly after she wrote the initial version of it. Then she took it to her producer, Marc Swersky, a two-time Grammy winner whose credits include Whitney Houston, Aaron Carter, Hillary Duff, and Asbury Park’s own Quincy Mumford.

“We played the first version live in shows shortly after we lost Catherine a number of days later,” Helen explained. “I knew that I wanted the song on my next EP as a tribute to her and her husband Steve, who is my beloved godfather, so I brought the song to my great friend, producer and co-writer Marc Swersky for inclusion on the record.

“In the years that I had known Marc, he had heard so much about Catherine and her support of my music that he felt he knew her from all the stories, and he told me that she deserved the very best song we could record for her,” she continued. “I watched -- mesmerized in the writing room that day -- as Marc took my simple little song and turned the melody and the music into something so beautiful and so uplifting that my love for Catherine was embedded in every note. I rewrote the lyrics for the new version of the song with input from my friends at the BMI Songwriting Group taught by Billy Seidman in New York, where we honed our songwriting skills later that year.”

“Someone Is Waiting” is the second single from Helen’s forthcoming six-song EP, “Know You’re Enough,” produced by Marc and recorded by Joseph DeMaio at his Shorefire Recording Studios in Long Branch. The first single, “Unbecoming,” also was written with Marc and is on the 2021 Grammy ballot as is the music video produced in Helen’s native Ireland by Commander Media. The "Unbecoming" clip has garnered multiple awards and special selections in film festivals in Los Angeles, New York and Montreal, including Best Original Song.

Helen said that “Someone Is Waiting” grew to mean even more to her after she sang it to her beloved mother, Josephine, in the days before she passed away unexpectedly in March 2019, almost a year to the day after Catherine died.

She said it is her hope that the tribute to a wonderful woman in her final days will be embraced by everyone who knows they are facing an untimely death of a loved one.

“Music and song have the power to contribute in some small way to the healing of bereaved families,” said Helen, who was a medical doctor before she swtiched careers with the support of her husband and children.

Here’s some other music she’s made since then: