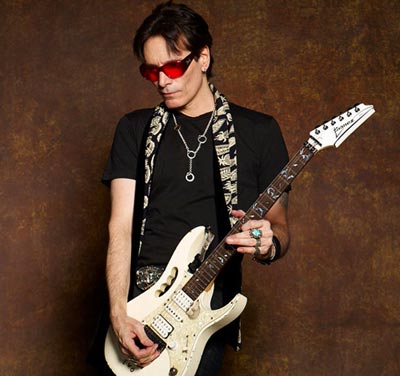 Vai will discuss his career, current projects, and legacy, which is celebrated in the Rock Hall’s Play It Loud: Instruments of Rock & Roll exhibit. The program will be hosted by Andy Leach, the Rock Hall’s Senior Director of Museum & Archival Collections.

Play It Loud: Instruments of Rock & Roll showcases iconic instruments used in rock & roll that had a profound impact on the art form that forever changed music. On display in the exhibit is Vai’s “Bones” electric guitar that has a sharpened Stratocaster-style body, humbucking pickups, and a locking vibrato system, solidifying the “Superstrat” style of instrument that began with Eddie Van Halen’s “Frankenstein” guitar. Vai introduced a pronounced cutaway that allows access to all twenty-four frets on the fingerboard, a floating vibrato design, and his signature “monkey grip” handle in the guitar’s body. "Bones" was designed by Vai before he started working with Ibanez and is one of four original Jem prototypes. The exhibit is open through December 2020.

Vai has awed fans of all genres with his exceptional guitar skills and musicianship for decades. He has toured the world as a solo artist, as a member of G3, Generation Axe, and with Rock & Roll Hall of Fame Inductee Frank Zappa, Inductee David Lee Roth (just after Roth left Van Halen), Alcatrazz, and Whitesnake—at the peak of its popularity. Vai’s full discography encompasses more than 60 albums, including many with Zappa, others from stints with Roth and Whitesnake, as well as live releases, collaborations, compilations, and orchestral works. Highlights include 1990’s groundbreaking Passion and Warfare, and 2007’s Sound Theories Vol. 1 & 2, performed with the Netherlands’ Metropole Orkest. More than three decades, over 15 million in album sales, and three GRAMMY® Awards later, Vai has proven himself, in his own right, to be one of the music’s true originals.

Learn more about Rock Hall’s events and exhibits at rockhall.com.