I am not above dragging out a well-worn saying when searching for a simple, clear way to illustrate a thought or idea. For this occasion, I unearthed “necessity is the mother of invention,” which could very well be considered the unofficial rallying cry for arts and cultural institutions since March.

While I see no need to replay accounts of the circumstances under which we all have been operating for more than half a year, I will say that hearing stories of resourceful ways that arts and cultural groups have managed the challenge is a source of joy and hope for me. 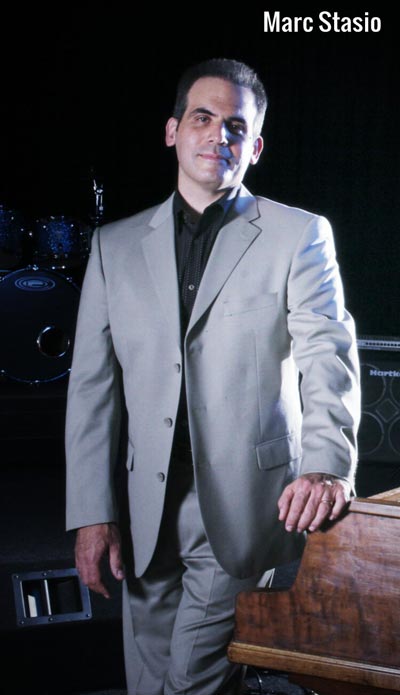 Marc Stasio, Managing Director of Jazz Studies at Rutgers Mason Gross School of the Arts, probably speaks for most everyone when he said, “going back to March, we all thought the impact of the pandemic would be temporary.”

But the complexity of the situation became clearer as the semester went on.

“In the spring,” he said, “we ended up taking what we normally do and turning it into a virtual version.”

But this solution was, at best, what Conrad Herwig, Head of Jazz Studies, called “emergency remote learning.”

Taking the remote route to teaching was more straightforward for academic courses such as jazz history, Herwig told me. “But it was extremely difficult, if not impossible, to maintain a normal schedule of rehearsals and performances,” he said.

So, after the decision to cancel in-person classes for the fall semester was announced, both Herwig and Stasio realized that they needed to put in place some new plans.

They both acknowledged that a way to move forward – not just as a reaction to pandemic-related restrictions, but as a general philosophy – was to offer students alternative ways of creating and performing music.

“Conrad and I decided not to look at the fall as let’s-do-something-until-we-get-back-to-normal,” Stasio said, “but to use the semester to show them a different aspect of music.”

They held a technology camp in August and introduced BandLab, the cloud-based platform that students would be using.

“It is used primarily as collection tool,” said Stasio. “We looked into many possible solutions and felt that BandLab’s educational applications make it the right fit for us.” 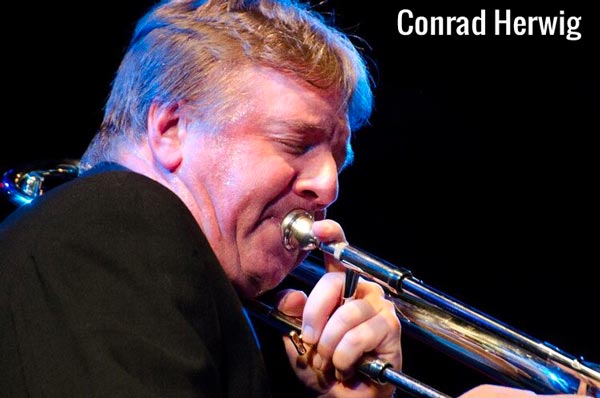 “Marc came up with online learning modules that each student goes through to learn,” Herwig said. “We all record to our individual computers, submit to BandLab, and then the tracks are compiled.”

“Nothing can replace playing together,” Herwig said, “but there are ways to use the technology to create a sense of improvisation and accompaniment.”

In addition to this method being an effective way to collaborate, the approach has also provided some unexpected benefits.

“Live music is one aspect of music,” Herwig said, “but now students are gaining new skill sets – recording, engineering, editing, video, and more – and they can use the technology to help them explore the other aspects”

And the tools help cultivate a deeper level of learning.

“The recording process acts like a mirror,” Herwig said. “In normal situations, we perform, and we are listening. But this way shows you exactly how you are doing.”

“Nothing is perfect,” he continued, “but what students miss in terms of audience feedback, they get by being able to really hear what is happening.” 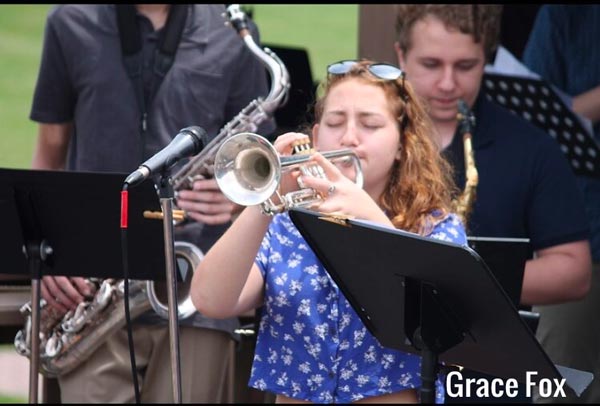 And how did students react? To find out, I talked to Grace Fox, an undergrad trumpet player, and Evan Kilgore, a saxophonist in the graduate program. While each had a different take on how things were going, both are satisfied with their experience this fall.

For Fox, fresh out of high school and a self-described jack of all trades – school jazz band, wind ensemble, chamber group member, and more – the switch to online learning took some getting used to.

“It was definitely a challenge at first,” she said. “I was constantly practicing, trying to keep up.”

But, now, more than halfway through the semester and with a pair of virtual concerts under her belt, Fox feels satisfied with how her freshman year is progressing.

“It has been a great learning experience,” she said, “and has personally increased my musicianship. Now I have to listen to myself every time I record. Then we have discussions in class. This really helps us improve.”

“I have made connections with so many people through that,” she said. “I am working on my own virtual big band of a group of 15 to 18-year olds from around the world, playing all original music.”

“So, even though we can’t play together, we have this,” she said. “It could never have happened any other way.” 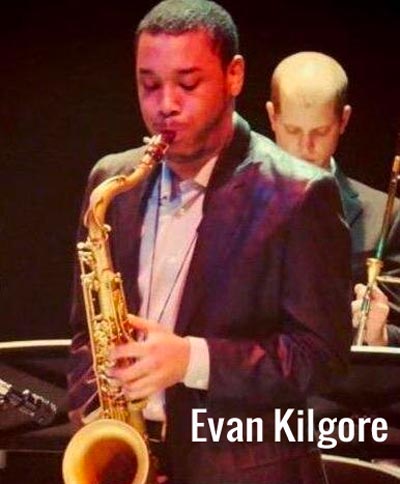 Kilgore is coming at this from a completely different perspective.

Prior to being accepted at MGSA, Kilgore was doing a lot of teaching and musical coaching, as well as playing gigs. But those opportunities dwindled or stopped completely when the lockdown became the new reality.

“I had been jamming regularly before this,” he said. “It was all I knew.”

However, Kilgore is happy with the creative approach taken by the Jazz Studies program.

“How I see it,” he said, “what we are doing is a valid form of musical expression.” And he believes that what he is learning now is helping him become a more well-rounded musician.

“As a performing musician, having the ability to record yourself is so important,” he said. “It has completely changed the way I practice.”

“I feel like I am learning a whole new instrument.”

To showcase the students’ talents, MSGA is hosting a series of virtual music events; two that happened in late October and two more to come in December.

“We are very proud of the performances,” Stasio said. “They were very well-received and people were quite moved by them.” 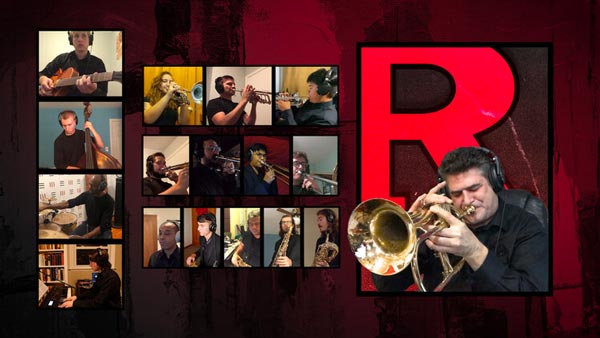 “It is important to continue to make the arts accessible to the public,” said Herwig. “The arts are a collaborative art form – we collaborate with each other and the audience. So, we have to find a way to continue that.”

“We will continue to use audio and video technology to move forward,” he continued, “and what we give up in one way, we gain in another. We just need to find that middle ground.”

“Another interesting part is that the virtual concerts have a much wider reach than those that are performed live,” Herwig said. “Our audience is growing and expanding.”

Stasio believes that these changes were inevitable.

“There is a connective world we need to tune in to,” said Stasio. “We need to teach students to face the virtual world as performers.”

“This has been a wake-up call.” 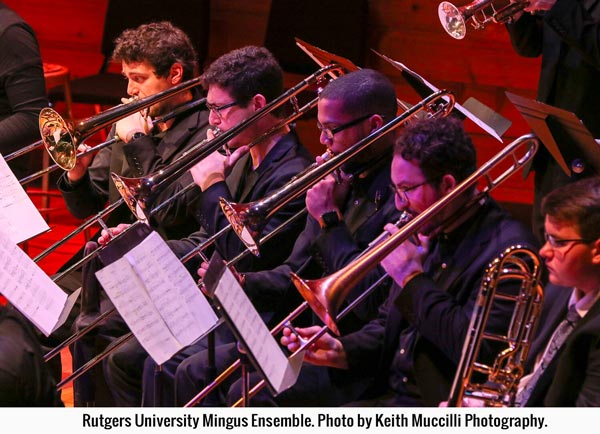 originally published: 11/05/2020
About the author: Shen’s been a Jersey girl for most of her life, other than living for a three-year stretch in Portland, Oregon, and six magical months in Tokyo. Shen loves the arts in all of its various forms – from the beauty of a perfectly-placed base hit to the raw energy of rock 'n' roll – and has successfully passed on this appreciation to her three grown children. Shen’s most recent jobs include WXPN (1993-2001) and the Philadelphia Museum of Art (2003-present). Shen also has been a working freelancer for 25 years, and operated her own frame shop in Mt. Holly in the late-70s.
Content provided by Discover Jersey Arts, a project of the ArtPride New Jersey Foundation and New Jersey State Council on the Arts.