Makin Waves Song of the Week: "Carmelita" by Tom Foti 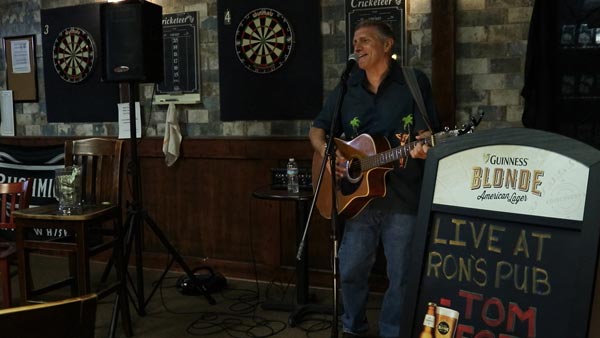 When singer-songwriter Tom Foti still was living near his native North Jersey, the Latino culture of New York City influenced a song entitled “Sinorita.” When he moved to Houston, the song further took shape from a Latino inspiration there and transformed into “Carmelita,” one of the 14 tracks on a long-waited sophomore LP, “Through the Night.”

To promote the 2020 follow-up to Tom’s 2005 debut album, “Anybody’s Guess,” a video for the fun Tex-Mex-flavored “Carmelita” premieres here as the Makin Waves Song of the Week:

The Makin Waves Song of the Week can be heard at 5 and 11 a.m., 5 p.m. and midnight through Thursday at thepenguinrocks.com and 6:45 p.m. Friday and Monday on its “Radio Jersey” show.

“Most of the song ‘Carmelita’ was originally penned in Brooklyn in the Clinton Hill section,” Tom said. “The first two verses and the instrumental were all written in New York, and I feel reflected the vibe of the streets there, the Latin influence and culture. I used to play it often on the subway platforms, and always got a great response from the people there.

“When I moved to Houston, I continsaued to play the song, and as time went on the song came to evolve,” he continued. “The original title was ‘Sinorita,’ but when a monster radio hit came out that was also named ‘Sinorita,’ I decided to change the song title. And about that time, I added a third verse and another instrumental at the end. Somehow the personality of Texas also worked its way into the general vibe of the song. And since it has been completed and released, I have seen the comments vary as to how different folks feel when they listen to it.  For some, it puts them in the mood of a tropical vacation, while others say it brings to mind a Southwestern cantina, and still others see it as a straight country song. However the listener wants to enjoy it, I’m happy that the song sparks a feeling within that they can relate to.”

Other fun numbers on the Tom Meeks-produced “Through the Night” include “Bittersweet,” but most of its tracks focus of someone dealing with a challenge, relying on inner resources to forge their way. A slow jazzy instrumental, “Prospect Park,” soothes the album’s moodiness to finish off the journey.

The video of “Carmelita” had a journey as well, Tom said.

“I first approached videographer Masaya Tamegai and director-star Lucas Hughes with the idea a few years before the album was made,” he said. “They both liked the basic premise and said it would be an interesting project. However, that idea did not form into a reality until ‘Carmelita’ was chosen as Makin Waves Song of the Week. That’s when everything began to happen.”

Both Masaya and Lucas were excited by the album version of “Carmelita,” Tom said.

The three of them set on a search for the clip’s title character, he said. But the quest was short-lived when they agreed upon mutual friend Lauryn Holdorff, a budding YouTube personality who specialzies in makeup and beauty tips.

“This was her first time acting as a leading lady in a music video,” Tom said. “The talent that we all had seen in Lauryn came alive on the screen, and she captivates with each subtle glance and infectious smile. The song sets a warm and friendly backdrop to the atmosphere as these two young people find themselves out in a local establishment, and then taking a chance on each other.”

Tom said he is hoping to play Jan. 9 at Richmond Arms in Houston.

Friends from New Jersey may find it easier to watch him in the following videos: