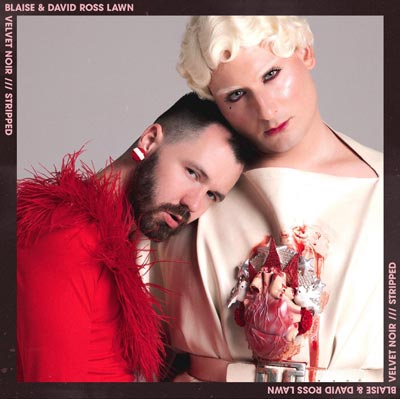 David Ross Lawn, left, and Blaise, right, have made one of the best Jersey records of the year with their “Velvet Noir /// Stripped” reimagining of the latter’s 2018 sophomore LP. PHOTO BY NICK KIEFER

I honestly don't know how they did it other than being incredibly talented, but Blaise and David Ross Lawn have improved upon a portion of the former's 2018 sophomore LP, "Velvet Noir," with heartbreaking emotional weight and pinpoint piano excellence. Their rawly produced collaboration, “Velvet Noir /// Stripped,” takes six of the album's tracks and, living up to the title, strips them to just Blaise's Bowiesque croon accompanied by David on piano with performances and arrangements that add to his reputation as one of New Jersey's finest musical artists.

Like all the songs on the EP, the opening “Kevlar” strips away the studio effects of the original album, chiseling the raw emotion of Blaise’s lyrics, his more plaintive vocal, and David’s gorgeous piano playing and densely dark and superbly sparse arrangement.

Like a 21st century Sinatra accompanied by a modern-day Bill Miller, the pair ooze sensuality on the echoing chamber-tinged inversion of “Catch Me If You Can,” essentially an EDM track originally. You no longer will be able to dance it, but my oh my will it stick to your spirit like a soul bullet. As Sinatra did with Miller, Blaise’s voice marvelously glides along the intricate arrangement like the rocks in Old Blue Eyes’ whiskey. David also adds to the emotion with a beautiful harmony vocal in the chorus.

Dedicated to all the boys and all the girls who have broken Blaise’s heart, the bluesy cascade of “Mr. Terrible” is the most rockin’ of the six tracks with an especially soulful vocal performance that proves Blaise is as good a singer as he is a showman.

David then mines the moodiness of “Let’s Never Meet,” while Blaise’s breathy vocal enhances its exoticism. Together, they turn a dance stab at emo into a Billie Holiday-like torch song.

The subtlety of David’s touch ironically next shines a bright spotlight on the strength of Blaise’s lyrics throughout “Out Loud,” as does a perfectly weary vocal that beautifully and soulfully builds into an explosive harmony, while “Trust the Fall” serves as a fitting close about love and hope in a time of widespread despair and disparity

I love this EP, and I adore the artists who made it. I hope they continue to work together because the world will be a better, more creatively enriched place if they do. And God knows we could use that.

A sequel featuring other “Velvet Noir” tracks would be great, but a songwriting collaboration of new music would be even better. And they should maintain the raw production quality because it heightens the inspiringly heartfelt and touchingly genuine emotion.