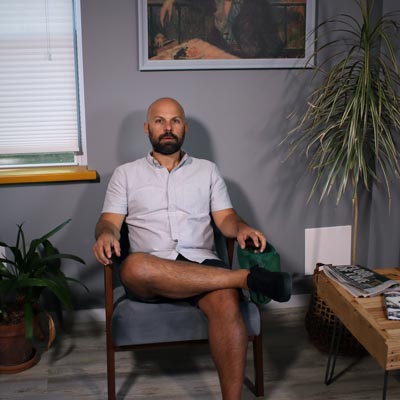 Jersey Shore indie music scene veteran Mike Chick records for North Jersey-based Mint 400 Records as both a member of the eccentrically edgy Asbury Park two-piece Yawn Mower and as a solo artist. The latter act has been particularly busy of late releasing the “Beach Wolff” double single this summer backed by his pals in Asbury’s GayGuyStraightGuy and Wet Brain. Mike now follows that with another double single, “Call Up the Doctor” and “Sleep Walking,” which is the Makin Waves Song of the Week and can be enjoyed here:

As the Makin Waves Song of the Week, "Sleep Walking" can be heard 5 and 11 a.m., 5 p.m. and midnight through Thursday at ThePenguinRocks.com, as well as 6:45 p.m. on its “Radio Jersey” show.

Both new tunes are raw, garagey, yet ambient tracks inspired and stitched together by dreams and home recorded on a four-track cassette using drum machines,acetone organ, and hollow-body fuzz bass, Mike said. Additional recording was handled by William Bourke and mixing completed by Patrick Noon at eightsixteen studios.

The results will make you want to both dance and pull the covers over your head.

Mike said he plans to release more Mint 400 solo music in 2021. In the meantime, here’s “Call Up the Doctor,” the video for the “Beach Wolff” tune “Where Did You Go?,” tracks from his 2019 Mint EP, “More Sh*t To End Up In A Landfill II”, and some yummy Yawn Mower clips: