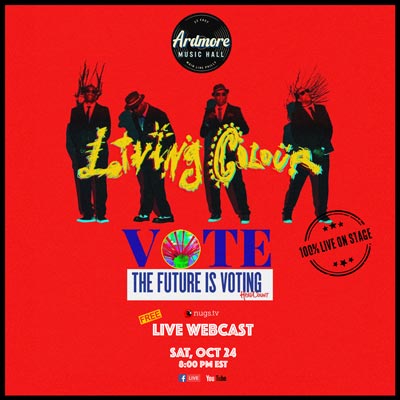 (ARDMORE, PA) -- Ardmore Music Hall will broadcast Living Colour's only concert of 2020 on Saturday, October 24th, followed by Matt Butler's Everyone Orchestra for their first live show since the beginning of the pandemic. Everyone Orchestra on Sunday, October 25th will feature Steve Kimock, Eli Winderman (Dopapod), Dylan Skursky (Cabinet), Arnetta Johnson and more. In partnership with HeadCount, both concert events aim to encourage voter registration and voter turnout ahead of the election on November 3rd.

Both live shows will be broadcast for free via Ardmore Music Hall's YouTube channel & nugs.tv utilizing world-class HD video and audio. Donations to benefit the musicians & venue staff are encouraged.

As indoor restrictions are gradually lifted across the Philadelphia region, Ardmore Music Hall will welcome very limited, socially-distanced & masked audiences. Fans can enter the Ardmore Music Hall's Golden Ticket Raffles & Silent Auctions for a chance to win tickets to each respective show. At the conclusion of each of the raffle drawings, a handful of winners will receive a pair of tickets per show, and an online silent auction for additional pairs of tickets will go live. 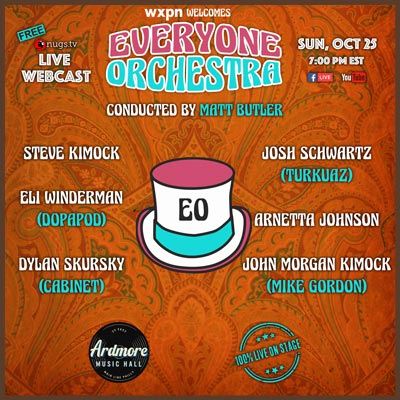 Living Colour's performance showcases the legendary funk metal rockers live on stage together for the only time in 2020, and offers exclusive virtual meet & greets via Zoom and signed posters for the event available to support the band. Tickets are available for purchase online.

Everyone Orchestra's 100% improvised live show with an emphasis on jam rock will include a star-studded Philly-area lineup of Steve Kimock, Arnetta Johnson, Eli Winderman (Dopapod), Dylan Skursky (Cabinet), Josh Schwartz (Turkuaz) and Johnny Kimock. Conductor and mastermind of the project Matt Butler has been staying active throughout the quarantine period with a string of live online installments of their Virtual Sessions Series. Tickets are available for purchase online.

HeadCount is a non-partisan organization that uses the power of music toregister voters and promote participation in democracy. We reach young people and music fans where they already are – at concerts and online – to inform and empower.

Ardmore Music Hall is established as one of the premier landing spots in the Philadelphia area for nationally touring musical acts, and is a rock club with a rich and long history at 23 East. Due to its geographic location on the Main Line, close proximity to the City of Philadelphia (3 miles), and a calendar full of a diverse range of artists, AMH draws from virtually every demographic group in the greater Philadelphia area. Past performers of the venue include George Clinton & P-Funk, The Hooters, Toots & the Maytals, The Psychedelic Furs, Chris Robinson Brotherhood, Stanley Clarke, members of the Grateful Dead / The Doors / Phish, Macy Gray, Television, Snarky Puppy, Steve Earle and many more. With the support of our fans and the region as a whole, Ardmore Music Hall will endure and cannot wait to start sharing full-scale live music with you again soon.