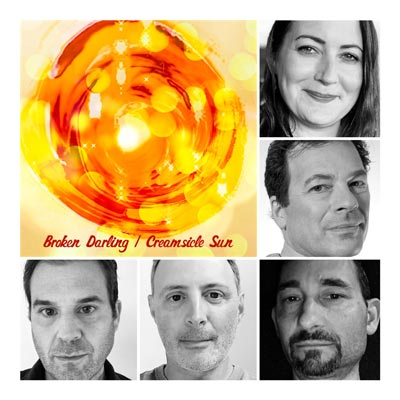 Mark Bodino has been a veteran of the Central Jersey music scene for many years. I remember writing about him during Makin Waves’ first run in the Courier News, which means it had to be before 2005. Six years later, he formed Broken Darling, a harmonic female-fronted folk-rock outfit whose dreamy new anthemic single, “Creamsicle Sun,” is the Makin Waves Song of the Week.

As the Makin Waves Song of the Week, “Creamsicle Sun” also can be heard 5 and 11 a.m., 5 p.m. and midnight through next Thursday at ThePenguinRocks.com and 6:45 p.m. on Friday and Monday on its “Radio Jersey” show. Check it out:

“I was seeing a client who presented a poem called ‘Creamsicle Sun’ about disillusionment, abandonment and loss,” he said. “I immediately said to him, ‘That’s a great song title,’ as he encouraged me to write it. The song title and writing content prompted a lot of imagery, which typically translates to music for me. It elicited a memory of a time when kids in the neighborhood would wait late in the day by this tree in my front yard, now gone, for the ice cream truck. Through the song, I wanted to represent an image of the sun from the perspective of a child: pure, surreal, magic, absolute and constant. I was trying to transmit something to myself and those kids waiting by the tree; still there and anticipating the sound of that ice cream truck.”

Broken Darling are planning to produce a live studio recording of new material because of the current pandemic state of performances is limited.

In the meantime, enjoy these latest videos by them: