Makin Waves Song of the Week: "Falling Out of Love Song" by Mike Daly & the Planets
By Bob Makin 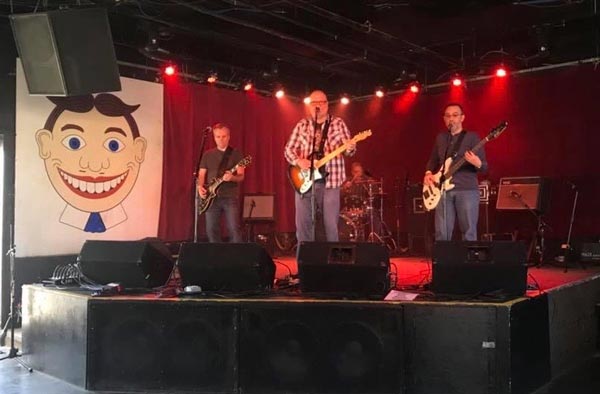 North Jersey-based Mike Daly & the Planets are pictured in 2018 at the Wonder Bar in Asbury Park during Makin Waves’ 30th anniversary party. PHOTO BY BOB MAKIN

Having kicked cancer’s butt twice, Mike Daly continues to write power-pop in the tradition of The Beatles, Elvis Costello, and The Smithereens, which he has done since the early 1990s. His latest single with his North Jersey-based band, The Planets, is “Falling Out of Love Song,” the Makin Waves Song of the Week, which made its radio premiere earlier this week on “Radio Jersey” and makes its media premiere right here, right now:

As the Makin Waves Song of the Week, “ Falling Out of Love Song” can be heard at 6:45 PM on Friday and Monday on “Radio Jersey,” plus four other times daily at 5 and 11 a.m., 5 p.m. and midnight through Thursday at thepenguinrocks.com.

“Breakups can come suddenly and without warning,” Mike said. “When you woke up that morning, you were in a relationship; when you laid your sorry head on your pillow that night, you weren’t. Whatever ‘benefits’ you started the day with had abruptly been revoked.

“One time, someone who’d broken up with me tried to soften the blow by saying it was ‘nothing personal,’” he continued. “And I immediately thought, what could be more personal than getting dumped?! But on the bright side, I soon came up with the chorus to a new song, and Elvis Costello was singing it in my head. And once I got some emotional distance from the end of that relationship, the rest of the lyrics easily fell into place.”

Like the Planets’ previous outing, “This Is My Life,” the breakup song reunited the band with mixing engineer Andy Halasz, who recorded members’ earlier band, Every Damn Day. Technology allowed them to team up even though Andy now is based in Pittsburgh.

The Planets include Every Damn Day’s lead guitarist, John Reynolds, and bassist, Jim Van Sickle, as well as their longtime friend Jim Smith on drums and gong.

Here they are rockin’ the aforementioned “This Is My Life’: