Makin Waves Record of the Week: "The Calling" by The Milwaukees 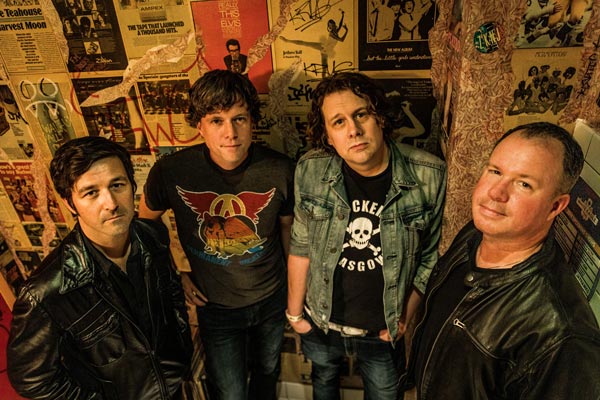 Jersey City-based The Milwaukees long-awaited sixth LP, “The Calling,” was worth the wait. The Mint 400 Records release is one of the best Jersey albums of the year. PHOTO BY VICTORIA ENGBLOM

Inspired by Tom Petty & the Heartbreakers, The Replacements, Hüsker Dü, The Afghan Whigs and Foo Fighters, Jersey City indie greats The Milwaukees have returned with “The Calling,” their sixth album and first in nine years. Formed 22 years ago, The Milwaukees today have one sole original member: founding singer-songwriter-guitarist Dylan Clark. He’s joined by longtime lead guitarist Jeff Nordstedt, who’s been on all Milwaukees’ albums except the 1998 debut, “Sunset and Sunrise”; bassist Donovan Cain, who joined around 2007, and new drummer Austin Faxon. While they’ve been away from the recording studio for a while, they’ve always practiced weekly and done a handful of shows each year since the release of their last outing, 2011’s “American Anthems, Vol. 2.” That includes plagued ‘n’ protested 2020.

Based on the national response to the 2001 LP, “Missile Command,” The Milwaukees were expected to have the kind of success that went contemporaries Thursday’s way, but that eluded them, and the grind of life broke their rock ‘n’ roll dreams but not their fervor for making excellent music. Produced by Tom Beaujour (Nada Surf, Juliana Hatfield, Guided by Voices), “The Calling” will appeal to fans of Gaslight Anthem and The Hold Steady with 10 tales of disillusionment, hard knocks and survival that kick off with the single “No Way Out.” The edgy, jangly affair flirts with Petty within a hearty, hefty gasp of Gaslight upon the mistakes of youth that become the trappings of adulthood.

“Wild Heart” then offers a stinging cry for mercy from a lover whose grown out of control, followed by the swaggering anthem “Stay Gold,” an indie inversion of Bob Dylan’s “Forever Young” mixed with a mashup of David Bowie’s “Young Americans” and “Golden Years.”

“Mother Mary” offers a rousing, driving stomper about alienation and acceptance, protection and perseverance, while “Falling” is an anthemic mid-tempo rocker that will appeal to those who appreciate the somber hopefulness of Springsteen’s “If I Should Behind” and “Darkness on the Edge of Town” and Petty’s “Free Fallin’ ’” and “Won’t Back Down.”

The sultry soulfulness of “Our Blues” expresses painful regret in the face of passing joy. Those sentiments continue with “Burn & Shame,” a jangle ‘n’ scorch that slashes with the edge of punk-rockin’ knife while staying true to a fiery foundation that recalls The Replacements and The Call.

Because of its hopefulness in the face of hardship, “The Calling” is one of the best Jersey albums of a tumultuously devastating year that draws to a magnificent close with its three best songs. “Proud of Me” is a guitar-ringing plea for affirmation from a lover whose been blinded by a futile quest for perfection. I love the second verse: “And your meaningless obsession is your own worst enemy. A shattered mirror hides your own reality. There’s a fundamental difference — and it’s always plain to see — between the man I am and who you want me to be.”

Another earnest lyrical nugget, “Highwire” is about holding onto an elusive dream weighed down by a harsh and unstable reality of fear, desperation and lack of faith.

And the closing piece de resistance is the plaintive, piano-driven title track. One of the best Jersey songs of the year, “The Calling” exquisitely summarizes the album’s hopefulness in the face of hardship, especially heartbreak, with a tale about how music (or any passion) can heal the hurt it often causes.

America needs a lot to make it great again, but this album definitely is a step in the right direction. I hope The Milwaukees get the opportunity to share it live as much as possible.