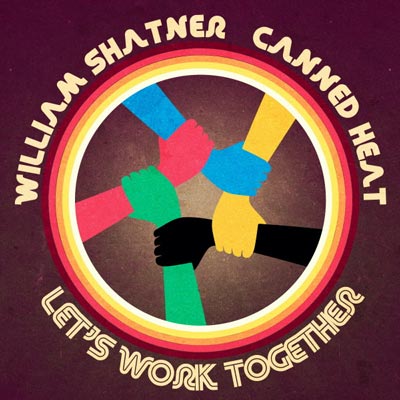 (LOS ANGELES, CA) -- In 1969, songwriter and recording artist Wilbert Harrison released “Let’s Work Together” amidst unprecedented social strife and racial tensions in America. The song was a clarion call to “every boy, girl, woman and man” to join the burgeoning social movements that promoted peace, justice and equality and a declaration that “Together we will stand, divided we’ll fall.”

The following year, Southern California hippie blues band Canned Heat released their own version of the song, which became a major hit and amplified Harrison’s call to action and unity. Now, that same band has teamed up with famed actor and musical interpretationist William Shatner for a much-needed revival of the spirit of unity found in this song.

“Let’s Work Together” features a backing track created by the current line-up of Canned Heat, including long-time drummer Adolfo “Fito” de la Parra, as well as a special guest appearance by former member, and revered blues guitarist, Harvey Mandel. The musical stage thus set, Mr. Shatner joins in with a dramatic, passionate rendering of the song’s lyrics, breathing a new life into the message.

Mr. Shatner proclaims, “This is a terrific song for this moment in time!”

Fittingly, “Let’s Work Together” will be one of the centerpieces on Mr. Shatner’s new album, The Blues, coming later this year that will feature a constellation of blues, rock and country performers who work together with Mr. Shatner to bring the blues to life including Sonny Landreth, Brad Paisley, Ritchie Blackmore, Pat Travers, Tyler Bryant and more - courtesy of Cleopatra Records. The song is available online.