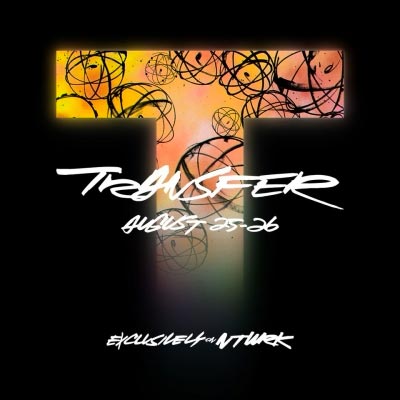 NTWRK has announced the launch of the first season of TRANSFER, a two-day virtual festival celebrating culture and design, in conjunction with Edison Chen and his agency 3125c. Iconic artist Futura 2000 will serve as the artistic director for NTWRK’s first TRANSFER festival.The inaugural festival will take place August 25-26, 2020 on NTWRK and feature exclusive drops and experiential content from world-class creators.

More than 30 brands and artists will be dropping exclusive products on NTWRK across the two-day festival, which is expected to draw 240,000 shoppers and 10 million viewers online. Each day will also feature insight-driven panels and interviews, virtual DJ sets, musical performances and more. A portion of the proceeds from the festival will be donated to a charity aiding those affected by COVID-19.

Futura 2000 will shape the event’s visual experience and his commercial product brand and design studio, Futura Laboratories, will design exclusive merchandise to be sold in the event’s virtual gift shop. He will also participate in forums during the festival to provide insight and inspiration to aspiring creatives.

Zack Bia will serve as the event’s musical director and perform multimedia DJ sets each day.

“I am excited to present TRANSFER alongside partner Aaron Levant [NTWRK CEO],” said Edison Chen. “We will work together to curate a menu of moments, objects, and vibes to inspire and touch the many corners and pillars of our culture. Creatives from east and west will be selected to bring memories and excitement to touch all corners of youth culture lifestyle. We are happy to have a mix of the old school and new school with our artistic and musical directors, Futura 2000 and Zach Bia. We promise to bring you drops and content to blow minds.”

“With the world shifting away from physical events,” said NTWRK CEO Aaron Levant, “NTWRK is aligning itself to be at the forefront of these new social commerce and digital experiences like TRANSFER.”

﻿TRANSFER will take place August 25th-August 26th on the NTWRK app and twice a year moving forward. More details will be shared in the coming weeks including participating brands and artists, additional musical guests, panelists and programming.

Edison Chen is a Chinese singer, actor, creative director and founder of CLOT Inc., whose headquarters are located in Hong Kong. His countless collaborations with Nike, Sacai, Casio and Levi’s have led the way in developing Asian street culture. His creative agency, 3125c, offers creative remedies that bridge the gap between high and low in the lifestyle culture realm across both eastern and western borders.

Futura 2000 (born Leonard Hilton McGurr) was known as early as the 1970s for his radical approach in the street, introducing abstraction to what was an entirely letter-based discipline. His work on canvas caught attention in the 1980s, establishing him as a leading voice within a wider art movement that included the likes of Jean-Michel Basquiat, Dondi White, Rammellzee, Keith Haring and Kenny Scharf.

Entirely self-taught in what he calls “the subway school,” Futura has been likened to Wassily Kandinsky for his mastery of color, geometric composition and line — and is celebrated alongside his friends Dondi White and Rammellzee for his progressiveness and of-the-moment dynamism. His work has been exhibited at notable art institutions such as the Museum of Contemporary Art (MOCA) in Los Angeles, MoMA PS1 in New York, the New Museum in New York, the seminal Fun Gallery, and most recently, the Beyond the Streets exhibitions in Los Angeles (2018) and New York (2019) and in Takashi Murakami’s Kaikai Kiki Gallery in Tokyo.

As an artist who also has a dedicated commercial practice and product brand (Futura Laboratories), he has collaborated in the last five years with partners such as Louis Vuitton, Commes des Garçons, BMW M, Chanel, Nike, Off-White and Levi’s; he has also designed iconic album packaging for musicians such as The Clash, and DJ performance stage visuals for Virgil Abloh.

Zack Bia was born in New York City. He grew up there and in Paris before moving to Los Angeles. At the age of 19, Bia started making moves in music with up-and-coming artists and in fashion, all while interning at a hospitality company, The h.wood Group. Today, at 23, he has already made a lasting impact on pop culture as a young creative and entrepreneur. He has become a critical piece of the success and growth of The h.wood Group brand by overseeing marketing, creative and client relations.

Bia also operates several of his own businesses. He owns and operates his own record label, Field Trip. He has a fashion line as well as many ties creatively in the field. He also has become a respected and sought-after DJ, playing guest sets at Lollapalooza, Paris Fashion Week and many other top-tier events. He currently resides in Los Angeles.

NTWRK is the definitive Video Commerce platform developed specifically for Gen Z and Millennials. NTWRK's innovative model of daily exclusive product drops, live videos, celebrity talent, native purchases and social distribution creates a high energy and wide-reaching experience for brands and users. NTWRK was founded in October 2018. Since launch, the platform has experienced meteoric growth and has received investments from some of the most successful entrepreneurs, brands and influential entertainers in the world including Live Nation, Foot Locker and Main Street Advisors, whose investors include Jimmy Iovine and LeBron James.