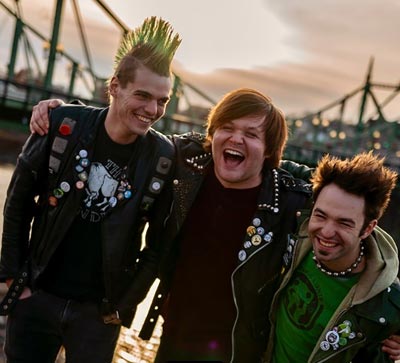 Despite having to put a world tour on hold, the Phillipsburg-based punk trio Houston & the Dirty Rats have had great success with their new digital and 7-inch EP, “Songs? From the Bathroom Stall!”

The Phillipsburg-based punk trio Houston & the Dirty Rats are the epitome of Makin Waves having played 100 shows in as many days last year across the United States and parts of Canada in support of records that have been received well internationally. To capitalize on that buzz, generated completely DIY, vocalist-guitarist Houston Herman, his brother drummer, Will, and bassist Baron Gerard were going to tour 49 states and Europe and play popular Gainesville, Fla. punk soiree The Fest in support of their latest EP, “Songs! from the Bathroom Stall?,” but the goddamn pandemic got the way.

While the global roadwork may haven been upended, Houston & the Dirty Rats still have been makin’ a bunch of waves with the EP, which was released digitally and as a 7-inch in five different colors, including international airplay and a playlisting by their inspirations at Fat Wreck Chords! Like so many punk entrepreneurs before him, Houston’s plan to keep on keepin’ on is aided by his own label, Rodencha Records, with which he’s also put out solo material.

More Dirty Rats recorded and video work soon will be on the musical horizon, hopefully, to coincide with a world of tasty shows. In the meantime, enjoy this chat with the entire band (unless indicated).

How do the three of you know each other and how did you form the band and when?

Houston: My brother, Will, and I started the band as a constructive, creative outlet while we were caring for our late mother in 2013. We had about seven bass players before Gerard. My brother and I had known him since we were kids. He was always available to practice and lived three houses down from us. We asked Gerard to join the Rats in the summer of 2015. We started as a band from the ground up, playing blues and rock covers in the garage for about three formative years.

What influential act is the most common ground between you, how and why?

Are the band fans of James Cagney, and did his famous movie line influence the name of the band?

(Laugh) James Cagney was a fantastic actor! His portrayal of Lon Chaney in ‘Man of a 1,000 Faces’ was incredible. We did get the idea from his famous movie line, and our band name is loosely based on George Thorogood & The Destroyers since we started as a blues-rock band. 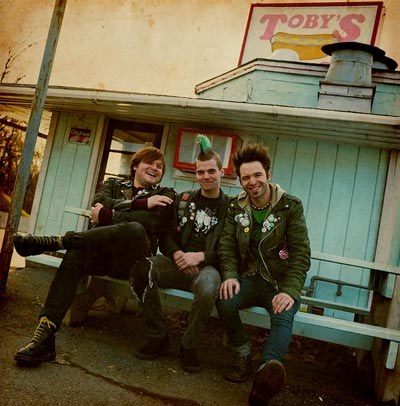 Houston & the Dirty Rats are from left to right bassist Baron Gerard, drummer Will Langan and vocalist-guitarist Houston Herman.

Are the music scenes in Phillipsburg and Easton connected?

Yes, they’re both parts of the greater Lehigh Valley area. It also includes Bethlehem, Nazareth, some parts of Allentown, and a bunch of other towns.

What else is that scene like, particularly for punk rock?

The underground community migrates to different venues, and we all know each other. True Blue Promotions, Jawnstowne Media, Pogo City Radio, Rat Milk Collective, and Rodencha Records do most of the show producing for the punk rock scene in the Lehigh Valley. We have some amazing venues: Spin Me Round Records, The Nazareth Jacksonian Club, Mothers Bar & Grill, The Catty Club, One Centre Square, The Town House, Fun House, Alternative Gallery, and The Building, a DIY all-ages venue.

What does punk rock mean to each of you and why?

Punk rock is a mindset and a code of ethics. A community of acceptance, unity, and belief that you make your own dreams come true. In many ways, it’s a family that can give you a home away from home, no matter where you are in the world. It's millions of misfits across the world willing to help each other achieve a common goal. 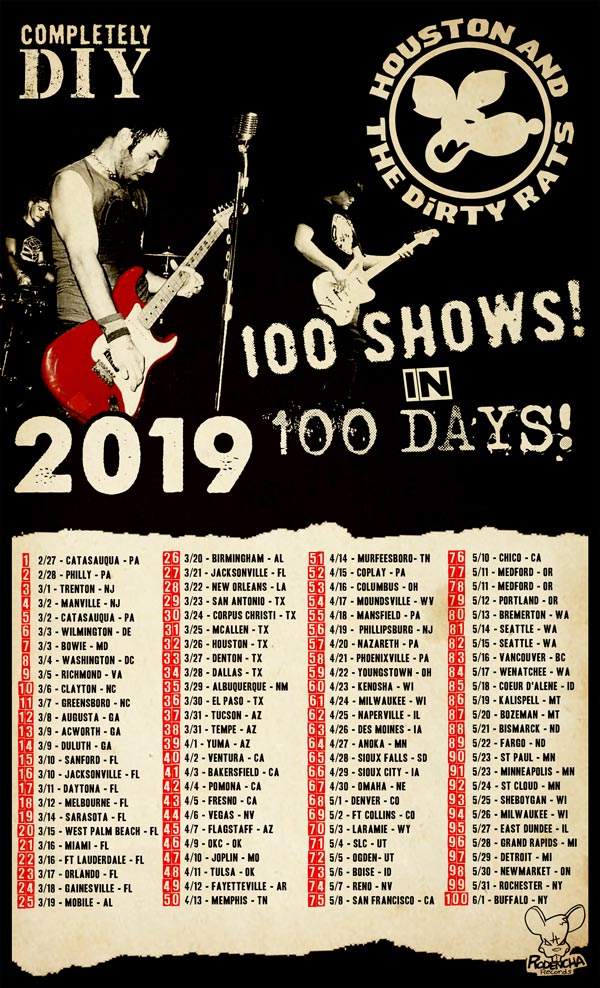 What was it like doing 100 North American shows in as many days, and would you do it again if you could?
The 100 DIY Shows in 100 Days Tour was a challenge like no other we've faced in our lives. It put the old saying, ‘Find a job you love, and you'll never work a day in your life’ to the test. We only had a year and a half of touring experience, when we embarked on the task of booking the tour. We had been on the road for more than half of 2018 and I wanted to do something BIG. We had a running joke while on tour in 2018 of ‘2019 100 Shows in 100 Days’ as a montre. No one believed we'd actually do it. By the end of the 100 Days Tour, we ended up playing a total of 101 shows in 92 days. Although we may never do 100 consecutive shows again, it is definitely our greatest accomplishment as a band so far. It proved what three ambitious punks from New Jersey are truly capable of in a van with a map and a dream.

You are the epitome of a band Makin Waves with the aforementioned North American tour, European bookings and a growing national fan base also built by consistent and good releases. The pandemic sucks, especially for hard-working bands like you. What plans were impacted?

Right on! That means a lot coming from you! This year we had planned to be on tour from August through November of 2020. We were going to do a U.S. tour of 49 states. Then we were going to fly to Eastern Europe, and close the year with a tour of the Southeast down to Fest, which is one of the largest independent music festivals in the country located in Gainesville, Fla. Due to the pandemic, all plans are on hold until further notice, sadly.

Despite the pandemic, you’ve had success with your new EP. Please share those successes.

Despite the pandemic, we were able to continue social distancing by having a virtual record release show at Spin Me Round Records’ store, which has been posted on dyingscene.com. The release show has over 4,000 views, and we have sold almost 100 records so far since it’s release on June 5. The 7-inch is available in five different colors, which you can order online. We have received nothing but positive feedback for the record.

Some big successes that we have had recently were our entire EP was played on an Australian radio station, and our song ‘The Lying Game’ was featured on UK Radio as well! A music video was released for ‘The Lying Game’ and was featured by New Noise Magazine, and ‘Dumpster Diver’ made it onto a Fat Wreck Chords Playlist!

What other plans do the band have as far as promotion, performing, and future videos & recordings?

We're releasing a new single on Aug. 1. It's a cover of an old country song by Lawton Williams called ‘Fraulein.’ It was recorded by Pete Steinkopf (of The Bouncing Souls) at Little Eden Studios in Asbury Park, and we're super STOKED to get it out on streaming platforms! The single can be streamed as of July 1 on Bandcamp.

We're filming a music video for ‘Public Restrooms Suck!’ off our new EP with Trenton-based D.I.WHY? Films. They've done ‘1,000 Keys’ for The Cryptkeeper Five and ‘Dramamine’ for Teenage Bigfoot. We’ve been very impressed by their work and are excited to work with them. Shooting is scheduled for late July, and we have plans to release in the fall of this year.

We are heading into the studio at the end of the summer and plan to record a new EP. Not to give too much away, our next release is going to be influenced by the current times and the difficulties we’ve all been faced with so far in 2020. We are really looking to focus on releasing new material in the near future and be as prolific as possible since we are unable to hit the road and tour.

Has Rodencha released any records by other artists or does it plan to?

Houston: Besides Houston -- The Punk Poet, my solo acoustic project, Rodencha Records is mainly just a production company used to produce shows and put out The Dirty Rats at the moment. We would love the opportunity to possibly work with other bands in the future, especially through some split 7-inch records.

What personal sacrifices have you had to make to maintain the success of the band and has the pandemic reduced those sacrifices?

We've all had to build our lives around touring and the band these past few years. Now the pandemic has given us the time to become more organized and focused on what our plans are for the future, as well as giving us time to catch up with family and friends. The last three years have been a wild bull ride, and now it's like we're in a paddleboat, everything is on pause in many ways but still moving forward. The entire world is getting used to the new normal and so are we. Working retail jobs isn't the most glamorous, we'd all rather be in a basement in Buffalo playing to a beer-soaked mosh pit of people singing along with us. But when we get back on the road, we'll be armed with more songs, and maybe it'll be even better than before the pandemic. Perhaps we'll be a part of hundreds of bands creating a musical renaissance!

Most of the success you’ve had has been of your own making. Why is it worthwhile to invest so much time, effort, and sacrifice into your DIY music?

An artist will always say that life without art is death. It's something you're born with, the internal drive to keep on pushing no matter what difficulties you are faced with. Many people look at entertainment as a race to fame, but it's the journey that makes it all worth it.

Our success has been our own making, but true success is never giving up and always moving forward. Walt Whitman self-published ‘Leaves of Grass’ when he was 36 and continued to write every day adding to the book until his death. The final edition is his legacy and proof of his journey. Musicians, artists, and poets leave behind their journey, and that's why getting in the van and chasing your dream is worth the sacrifice and every minute.

You miss 100 percent of the shots you don't take.