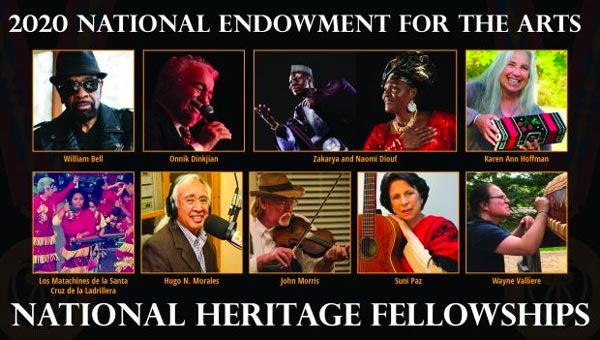 Onnik Dinkjian, an Armenian Folk and Liturgical Singer from Fort Lee,  was awarded a 2020 National Heritage Fellowship - the nation’s highest honor in the Folk & Traditional Arts - by the National Endowment for the Arts. One of the most beloved and influential Armenian singers in America, Dinkjian’s tenor voice is soothing and expressive, conveying both the utter joy and passions of his Armenian heritage and the deep sorrow of its painful history.

Since 1982, the National Endowment for the Arts has awarded 449 fellowships throughout each state and territory of the nation. Fellows are nominated by the public, and it is the great privilege of the Folk & Traditional Arts staff to manage the nomination and recognition of the National Heritage Fellows. The 2020 recipients are masters of a wide range of folk and traditional art forms - covering music, dance, and craft. Each fellowship includes an award of $25,000.

In the recent announcement of the 2020 Fellows, chairman of the National Endowment for the Arts Mary Anne Carter said: “Each year the Heritage Fellowships highlight the distinct living traditions of communities around our nation, as well as how our fellows instill a sense of pride, beauty, and cultural continuity through their art. The National Endowment for the Arts is pleased to recognize these outstanding artists with a National Heritage Fellowship.”

The annual celebration of the new class of National Heritage Fellows will take place virtually this year, in response to the COVID-19 pandemic. More information about this event, including the date, will be available at a later time.

Fellowship recipients are nominated by the public, often by members of their own communities, and then judged by a panel of experts in the folk and traditional arts. The panel’s recommendations are reviewed by the National Council on the Arts, which sends its recommendations to the Arts Endowment chairman, who makes the final decision. The deadline to submit a nomination for the 2021 class of National Heritage Fellows is July 31, 2020. Visit the National Endowment for the Arts website for more information and to submit a nomination.

Here is the 2020 class of National Heritage Fellows! (click on the links for full bios on the recipients):

﻿Morales is the 2020 recipient of the Bess Lomax Hawes National Heritage Fellowship, presented in recognition of an individual who has made a significant contribution to the preservation and awareness of cultural heritage.

Established by Congress in 1965, the National Endowment for the Arts is the independent federal agency whose funding and support gives Americans the opportunity to participate in the arts, exercise their imaginations, and develop their creative capacities. Through partnerships with state arts agencies, local leaders, other federal agencies, and the philanthropic sector, the Arts Endowment supports arts learning, affirms and celebrates America’s rich and diverse cultural heritage, and extends its work to promote equal access to the arts in every community across America.

The following is a biography of Onnik Dinkjian by Carolyn Rapkievian, Armenian Dance Director and Smithsonian Educator Emeritus as listed on the N.E.A. website.

Onnik Dinkjian is one of the most beloved and influential Armenian singers in America. Four generations have listened to his recordings and have treasured his singing at Armenian concerts, dances, weddings, and church services throughout the United States. Dinkjian’s tenor voice is soothing and expressive, conveying both the utter joy and passions of his Armenian heritage and the deep sorrow of its painful history.

Dinkjian was born in 1929 in Paris, France. His parents, born in Dikranagerd (Diyarbekir), Turkey, were survivors of the 1915 Armenian Genocide, and died when he was an infant. His godparents, also survivors of the genocide from Dikranagerd, adopted him and they immigrated to America in 1946. The Armenian dialect from Dikranagerd is unique and Dinkjian is one of the last remaining Armenians who speaks and understands it, and perhaps the last who sings in this endangered dialect.

Dinkjian’s earliest musical experiences were in the Armenian Church, where he became a featured soloist. Upon joining the U.S. Army in 1952, he became soloist of the famed Winged Victory Chorus, which entertained the troops throughout Europe during the Korean War.

Apart from the sacred music of the Armenian Church, Dinkjian’s repertoire consists of mainly folk and popular songs from the Anatolian (Eastern Turkey) villages, Armenia, and the Armenian Diaspora. Dinkjian is also a composer and lyricist, whose songs have become standards in the American-Armenian community.

Dinkjian made his first recording in 1948 on the Bat Masian label (78 rpm), followed by subsequent 78s, 45s, LPs, and CDs. His recordings quickly became bestsellers in the American-Armenian communities, which resulted in decades of live performances. Much of the repertoire heard at Armenian functions in America was learned from Onnik Dinkjian. He has continuously and generously spent time with young American-Armenian musicians, encouraging them to treasure their cultural identity by sharing their talent. Specifically, he has written out hard-to-decipher lyrics and guided young singers with lyric translations and proper diction.

In 2009, Dinkjian was invited to do a concert in Diyarbekir, dramatically bringing the local Armenian folk songs back to their place of origin after having kept them alive for generations in America. Although there were virtually no Armenians present, he was welcomed and honored by the Kurdish and Turkish communities, as well as by the mayor. A documentary film titled Garod (Longing) was produced by Kurdish and Turkish filmmakers in recognition of this historic event.

Dinkjian has performed at the Library of Congress, the Smithsonian Folklife Festival, and the Kennedy Center’s Millennium Stage.