In preparation to write this feature, I consulted an online dictionary for a definition of art. This – “art is the expression or application of human creative skill and imagination producing works to be appreciated primarily for their beauty or emotional power” – is the one that spoke to me.

Art is constant, universal, and powerful. And Sandra Eula Lee, one of 28 New Jersey artists honored with fellowships this year by the New Jersey State Council on the Arts (NJSCA), believes that the value of artistic experiences is especially relevant now. 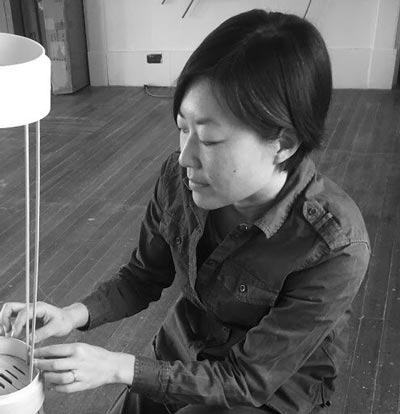 “When the world around us feels uncertain, art has the potential to provide comfort and a space to work through the contradictions, complexities, and confusion,” Lee said. “It can help build empathy, trust, and understanding.”

“And during these times of violent tensions,” she said, “art is more vital than ever.”

Since 1966, NJSCA has awarded fellowships to individual artists who work in specific disciplines,” Danielle Bursk, Director of Artist Services at NJSCA, said, “and artistic excellence is the only criteria.”

“For 2020, the categories were sculpture, choreography, poetry, and music composition,” she continued, “and the top two awards this year are for sculpture.”

Lee, one of the sculpture award recipients, is the daughter of Korean parents who immigrated to the United States in 1970. They arrived in Philadelphia before settling in northern New Jersey, where Lee was born and raised.

“My curiosity about making things started early on,” she said. “I started looking at art and became interested in the different approaches artists offered.”

I asked about early influences.

“There are no artists in my immediate family,” she said, “but I’m told that my grandmother was really creative and entrepreneurial.” 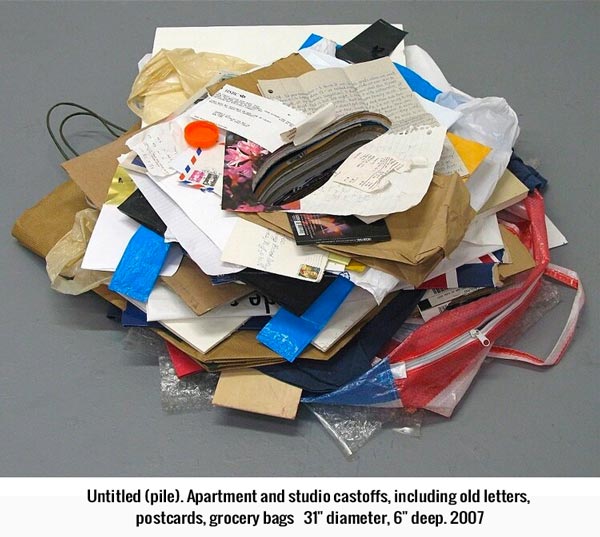 By the time Lee finished graduate school in 2007, her original ideas about art were developing in new and exciting ways.

“In college, my program emphasized more traditional sculpture processes,” she said. “After graduating, I discovered artists who were making connections between interdisciplinary ways of creating art.”

“I was inspired by the small meaningful gestures made by Fluxus artists, like Nam June Paik and Yoko Ono,” Lee explained, “then the work of Italian artists like Marisa Merz and Giuseppe Penone, who were part of an Italian art movement in the 1960s.”

“I also like Robert Smithson and Nancy Holt’s earthworks, and David Hammons’ sculptures, which I consider a kind of subversive poetry. I loved how they utilized commonplace, everyday materials in transformative ways.”

It is this concept – of collecting and repurposing found objects to create something original - that has guided Lee’s artistic vision.

She has lived, made art, taught classes, led programs, and held exhibitions in Asia, Italy, and in the United States.

“In 2009, after the crash, I was able to travel to Asia with the much-needed support from grants, fellowships, and teaching,” Lee said, “and I had many cultural and artistic opportunities, for museum residencies and exhibitions.” 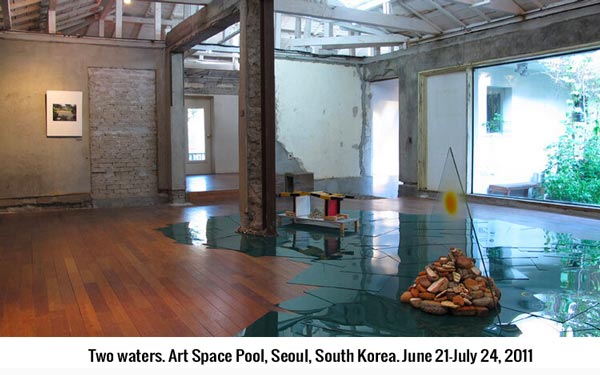 For the next two years, she did residencies with The National Museum of Contemporary Art and the Seoul Museum of Art (funded by the Asian Cultural Council, NY) and hosted her exhibition, “Two waters” – which Lee describes in her Artist Statement as “a reflection of the changed historical landscape and the power of creating place through the small act of garden-making” – for the first time at Art Space Pool in Seoul.

In 2011, Lee had a residency and exhibition at Aljira Center for Contemporary Art in Newark, an art space that also supported her work early on after college. Then, from 2011-2015, Lee jetted back and forth between Xiamen, China (Chinese-European Art Center) and New York (The Brooklyn Botanic Garden), doing residencies and additional showings of “Two waters.”

Lee held exhibitions and ran the Expanded Sculpture program at Kenyon College from 2015-18, and, currently (beginning in 2018) at Franklin and Marshall College in Lancaster, PA.

Lee and her husband, artist Yun-fei Ji, live in Bergen County, NJ. She chose to return to New Jersey, because of the “great studio space, strong immigrant neighborhoods, fantastic food, and proximity, and so many amazing nature spots within the region.”

The “nature spots” are particularly important, since gardens are a prominent theme in Lee’s work. I asked her what it is about gardens and garden spaces that first appealed to her and made her want to create around that idea. 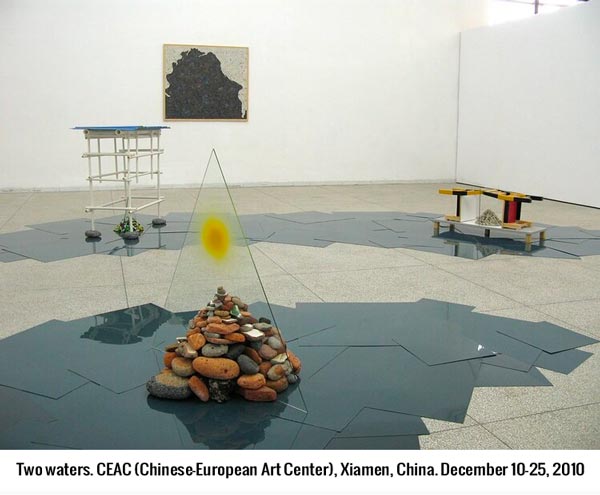 “Living in urban areas, I have noticed how residents find ways to create and represent nature in many inventive ways, often using discarded materials,” said Lee. “They are making spaces in which they can slow down and reflect, occupying the in-between spaces.”

“I became interested in these acts of ‘garden-making’ in the middle of change. It is the space of imagination between the physical materials used and the landscape that is represented that I’m most interested in.”

“It is an artistic space.”

At this same time, Lee became an avid harvester – of remnants, fragments, construction rubble, all sorts of left-behind and unwanted objects.

Before sustainability became a catchword for a range of environmentally focused ideas, Lee was creating work that utilized objects that otherwise might end as trash.

“It’s a meaningful process, encountering and collecting these bits and pieces from my surroundings,” she said. And later, many of the items are repurposed and reassembled to use in her work.

When Lee was in South Korea and Beijing, she visited many traditional gardens that have large central ponds. “The water was a calming space that reflected back its environment,” she said, “I started to make my portable ponds from industrial remnants, carefully placing each piece to shape and transform them.”

And although the materials are anything but soothing, Lee’s constructed ponds feel like contemplative spaces. 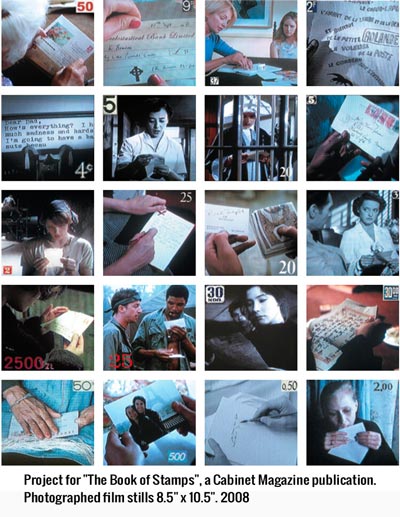 Many of Lee’s subsequent projects and works have also been nature-sourced, but others – like “The Book of Stamps” – were developed outside that genre.

Published in 2008 by Cabinet Magazine, an award-winning quarterly art and culture magazine, this remarkable book honors a generally underrated art form – postage stamp design – and features limited-edition works on that theme by 15 artists.

“It’s a beautifully produced book,” Lee said, “with projects by both established and emerging artists.”

According to her artist's statement about the project, Lee explained that her stamps were created “with nostalgia for the handwritten letter.”

“I selected films from different countries and different periods,” she said, “where the plot twist occurs when a letter is sent or received.”

Aside from the project’s theme being unlike a lot of her other work, Lee said the process was also different.

“I went back and watched some of the films again, and it’s interesting to think about that now.”

“Writing and sending letters really slows you down,” she said. “It’s almost like a ritual, going through the physical gestures of preparing and sending your thoughts.”

“At the time, I also created a body of work considering routines and the space of everyday life,” she said. “For that, I used materials from my home and workplaces, bits from my domestic, studio, and office lives.”

“The Walking Mountain” is an artist book in an edition of three, which includes original drawings, photographs of sculptures, and text written by Lee, with a theme that returns to nature and its capacity to withstand external forces.

“The book came out of my years living in Beijing and my thoughts about resilience,” Lee said. “People may think gardens are ephemeral, but in my experiences, it’s the buildings and structures that are demolished consistently,” she said. “Nature always takes over and it’s the gardens that grow back.”

Lee’s next major solo exhibition, “Make Of/Make Do,” was described as work in which the artist “makes use of ordinary and, at times, site-specific materials to construct two- and three-dimensional arrangements.” It was on view in 2016 at the Paul and Lulu Art Museum, University of Louisiana Lafayette, and in 2017 at Lab47 in Beijing, China. Her most recent solo exhibition, “THE BEND,” was shown in 2018 at the Gund Gallery at Kenyon College and described on the gallery page as an “installation that investigates links between historic landscape and the activity of garden making, and the significance of creating place within changing environments.”

While Lee never stops making art, she also continues to pass on the wealth and depth of her background and experience to students in her Expanded Sculpture classes.

What is Expanded Sculpture?

“Sculpture is the study of the objects we make and the constructed world around us,” she said. “The way I teach is to try and highlight the interconnections between the creation of art, culture, and the shaping of public space. Who made it? Where? And how?”

“My early training was historical, but the approach I put together is shaped by my experiences,” she continued, “with many different cultural contexts to help make discussions relevant to all my students’ perspectives.”

“I do a lot of research for my work and I try to find ways to share that knowledge with my students too.” 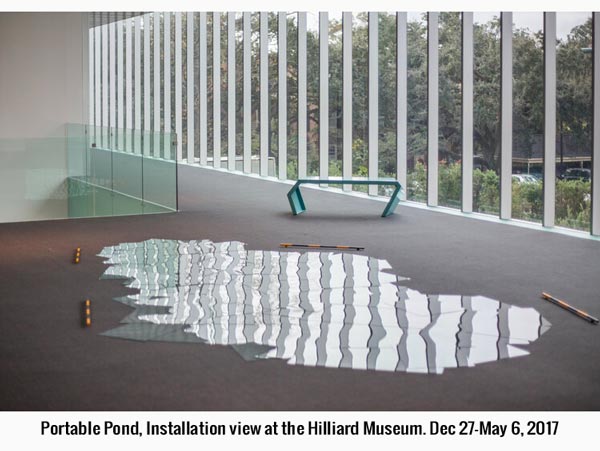 Finding the time and resources to teach and create new work is a delicate line that many artists walk. Lee is no different, which is why she is so thrilled to have won one of the NJSCA fellowships.

“The fellowship – at this point in my career and with the extreme challenges from the pandemic and burning questions of power and representation – is especially meaningful now,” Lee said.

“I feel like having this is giving me inspiration, helping me look forward and get motivated to take new risks in my artwork,” she said. “I have already purchased a portable kiln and I’m melting down and firing materials to include in my next show.”

“This fellowship is a lifesaver during such an uncertain and painful time. It is giving me the time, space, and resources to process the current moment through my artistic voice.” 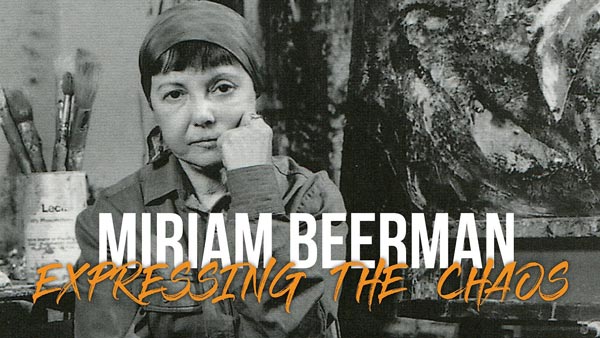 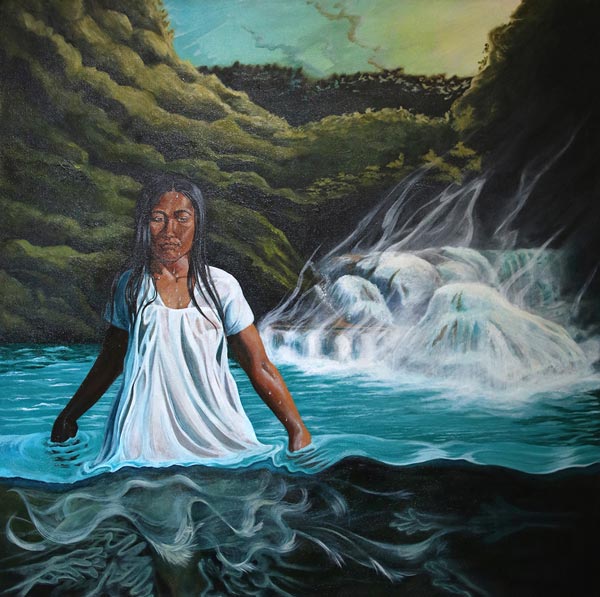 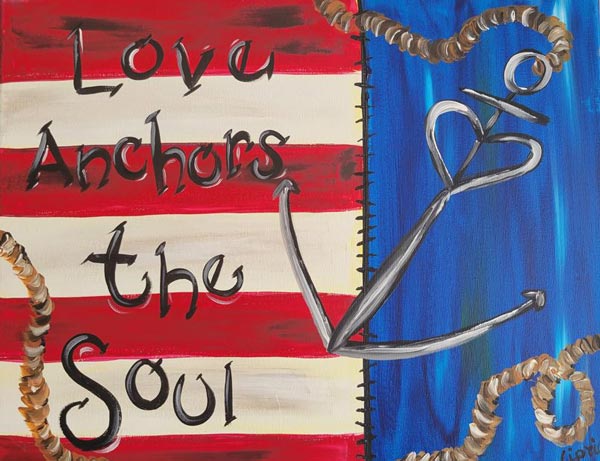