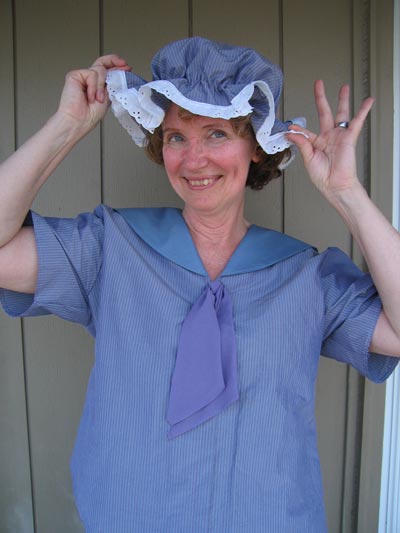 (CAPE MAY, NJ) -- "What was good for the baby forty years ago is not good for the baby of today. Today, it is widely recognized that if the baby wants to cry, let it do so, thereby exercising and strengthening its young lungs. The best therapy for the baby is to leave it alone, to put it outdoors, and to seemingly forget all about it," wrote Mae Savell Croy in her book "Putnam's Household Handbook" published in 1916.  Other "hints" include how to clean the stove and clothes with kerosene and the importance of a cheerful doctor.

East Lynne Theater Company commissioned Susan Tischler to create a one-person play based on Croy's book and perform it under the direction of Karen Case Cook, at The Chalfonte Hotel in 2008.  She later performed this comedy at ELTC's performance venue, The Cape May Presbyterian Church and on the road.

On Thursday, July 2 at 4:00pm, Susan will read selections from "Helpful Hints" at ELTC's "Tales of the Victorians." In fact, classic American literature is read every Thursday at 4:00pm, weather permitting, in the backyards of homes in Cape May, and the only way to find out the location, is to make a reservation by calling 609-884-5898 or e-mailing eastlynneco@aol.com.  The cost is a minimum donation of $5.00, paid with cash, at the door.  As usual at ELTC, ages 12 and under are free.  The "Tales" on June 25 celebrated LBGTQ Month, and on June 18, Ida B. Wells.

Tischler was also in ELTC's "Sherlock Holmes Adventure of the Speckled Band" and "The People of Cape May vs. Johan Van Buren." From 2017-2019, she performed for SPQR Theatre, also in Cape May, in "Calliope Rose," "The Wreck of the Spanish Armada," and her own original works, "Meet the Locals" and "Tao of Tisch." She was then selected to perform

"Tao of Tisch" at The Women's Theatre Comedy Showcase in Parsippany, NJ. Other credits include portraying Minnie Pearl and co-producing "Barry's Cape May Opry" and "Barry's Christmas Opry," proceeds of the latter go to the West Cape May Christmas Parade. She is the co-owner of Kaleidoscope and Just for Laughs on the Washington Street Mall in Cape May.

Until further notice, ELTC is making the following requests: please wear a mask, and sit where socially-distance seats have been cleaned and placed.  They'll not be serving drinks and food, but guests may bring a beverage. No restroom facilities will be available.

Not in Cape May? ELTC is offering "Tales of the Victorians at Home."  On April 30, the company launched its first "Tale," and has continued to offer one every Thursday on ELTC's YouTube Channel. The writers so far include Poe, Service, Stowe, Glaspell, Stockton, Chopin, and Wells.

To learn more about ELTC's "Tales of the Victorians," stories, performers, and where to find the videos, visit www.tinyurl.com/ELTC-tales.

Visit www.eastlynnetheater.org, for updates on streaming productions in July and August, and the 40th Anniversary Mainstage Season.