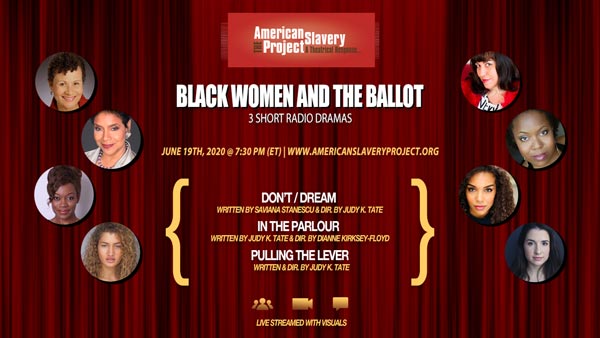 (NEW BRUNSWICK, NJ) -- Crossroads Theatre Company is partnering with the American Slavery Project (ASP) and a consortium of theatre companies and theatre allies to present Black Women and the Ballot, three plays that for the first time will be available nationally and experienced virtually on Friday, June 19 at 7:30pm (EST).  The performances, that depict the rebellions large and small by Black women to progress voting rights, can be accessed from the Crossroads website at www.crossroadstheatrecompany.org.

“Black Women and The Ballot marks Crossroads’ entrance into the virtual space of theatre performance since COVID-19 swept in changing our lives, our livelihood and our leisure,” said Anthony P. Carter President of the Crossroads Board of Trustees. “We are proud that our first production on a virtual platform spotlights the very important and timely topic of voting and we encourage our patrons and supporters to join us,” Carter added. The consortium of theatres joining Crossroads and ASP presenting the plays include the Classic Theatre of Harlem, the Liberation Theatre Company and The Sheen Center for Thought and Culture.

The American Slavery Project, the brainchild of Judy Tate, an Emmy® A-winning writer and playwright, “is the theatrical response to making connections between our beginnings as black people in America through to today; and creating conversations that educate and enlighten” Tate said.  Black Women and the Ballot examines the relationship between America and Black women voting in this 100th anniversary year of Women's Suffrage.  Specifically, it sheds light on African-American women’s contribution to suffrage over multiple decades and the undocumented and disenfranchised Black immigrant women overlooked today and highlights ASP’s platform Voter Outreach Thru Theatre Engagement (V.O.T.E.).

The performances are called radio dramas, evoking the radio plays of the past before television.  There will be visuals that will complement the performances to enrich the virtual experience including photos from the featured plays and historic milestones. The total running time of the three featured radio dramas is 37 minutes.  They are titled Don’t/Dream by Saviana Stanescu; In the Parlour and Pulling the Lever written/directed by Judy Tate.  A talk back session is included as part of the program that will include video of the actors who will talk about their voting experiences and what voting means to them.

Phylicia Rashad in the role of “the Ancestor” in Pulling the Lever sums up the importance of voting saying “The only thing I pray for now is that somebody tells the children what happened because they got to tell their own.  If you don’t pass it on people forget.”

In the Parlour, By Judy Tate, Directed by Dianne Kirksey Floyd - On the eve of the historic 1913 Women’s March for votes, young Howard University student, Edna Brown stiches up walking skirts for her sisters of the newly formed sorority, Delta Sigma Theta, to wear. But when she learns that the famous white suffragette, Alice Paul, the march’s organizer has other plans, she gets help from the formidable Mary Church Terrell and the shrewd president of the Alpha Kappa Alpha, Sorority, Inc. It is a battle of wit and will in this original imagining of a very true story. Running time: 25 mins.

The 1999 Tony® Award-winning Crossroads Theatre Company (CTC), now a resident member of the New Brunswick Performing Arts Center (NBPAC), is in its fourth decade of being a preeminent gateway for black theatre that has been the stage for many actors, directors, designers, writers and other theatre professionals. Since opening in 1978, CTC has built a rich and storied legacy, celebrating the culture, history, spirit and voices of the African Diaspora.

American Slavery Project - Productions feature the original works of African Americans who write about the era of enslavement through to today.