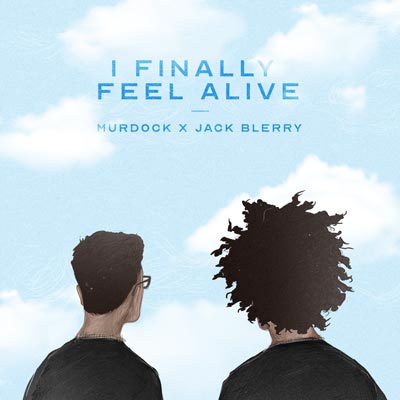 Jersey City rapper Murdock and childhood friend Jack Blerry have collabed on the new album, “I Finally Feel Alive,” the title track to which is the Makin Waves Song of the Week making its video premiere here. ILLUSTRATION BY ALEX LOBO

Jersey City rapper Murdock has delivered one of his best albums to date, “I Finally Feel Alive,” a collab with childhood friend Jack Blerry of the jazzadelic Jersey-originated rap act Cook Thugless, whose other members participate throughout the LP. The opening title track is the first ever featured as the newly expanded Makin Waves Song of the Week, which not only will get its usual spins on ThePenguinRocks.com and its “Radio Jersey” show but also is featured here at NewJerseyStage.com. Like many of Murdock’s other songs, the passionate rapper skates on the edge of raw emotion throughout “I Finally Feel Alive,” the video for which makes it media premiere here:

As the Makin Waves Song of the Week, “I Finally Feel Alive” will be played 5  and 11 a.m., 5 p.m. and midnight through Sunday on ThePenguinRocks.com, as well as 6:45 p.m. on Friday and Monday on “Radio Jersey.” The redemptive tune features a great trombone track by album co-producer Mistake Boi, also of Cook Thugless. The somberness of Boi’s bone offsets the cute plink of a charming effect featured throughout. The bone represents suicidal thoughts, while the effect represents the positive impact of music as it replaces pain with pride and joy.

“When Blerry and I first went through beats together for this album, we heard the instrumental for this song and both immediately knew that it had to be on the album,” Murdock said. “We could feel the emotion and the uplifting spirit of the song through Mistake Boi's production and the inclusion of his amazing trombone work. Not only did we know we had a great song on our hands, but we had an intro to the album. It sets the tone for the record as a source of inspiration that despite all of life's challenges, we're both still here and we're succeeding.”

Jack provides the second verse on the track followed by a duet with his fellow Jersey City-ite. Cook Thugless’ stamp on the 11-song LP also is in the recording and mixing by the band’s guitarist, Jace Limb, as well as features on two of three other singles and videos: the gangster turn of “Gotti Gotti” and the tongue-in-cheek “Class Act.” They respectively feature Jean Louis and J-Titty, Jack’s co-MCs in Thugless. “I Finally Feel Alive” also is preceded by Murdock’s 2015 six-song debut, “Anxiety. Nostalgia. Confidence”; the 2016 full-length debut, #AAAH (Agoraphobic. Alcoholic. Asshole.), the 2018 masterpiece “Rebirth,” and the most recent single, the uplifting “Look at Me Now.”

Check out the Makin Waves Song of the Week next week when Cook Thugless go two-for-two with their latest outing. Until then, here are the other videos from “I Finally Feel Alive”: