Steven Keene Releases "Save Yourself" - A Single For These Panicked Times 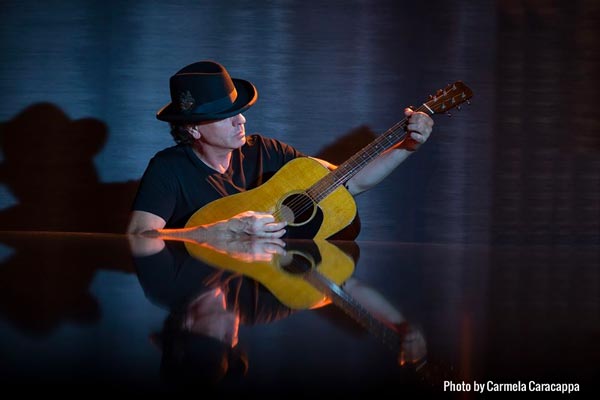 Colts Neck-based singer-songwriter Steven Keene has never been big on offering up explanations or meaning behind his songs. Everybody's got their own personal take on them, so less is more when it comes to revealing his own personal experience behind any given lyric or refrain. But the refreshingly peculiar aspect of Keene’s distinct lyrical style has always been his poetic capacity to conjure universally relatable imagery – of love, of loss or longing –  the well-crafted art of his storytelling that lets listeners connect with and interpret songs through their own lived experience.

It would seem Keene has now put an uncanny interpretive finger on the panicked pulse of our current collective experience with his latest single “Save Yourself” (to be released May 15th, 2020 on Symphonic). The timely blues- rock anthem reads like a sardonic sign of the times, casting a critical eye on the hypocritical side of human nature ...as a self-obsessed and virtue signaling society turns from sanctimonious cries to “save the world” on social media to frantic displays self-preservation the moment times get tough.

With lyrics like ‘your cow has gone dry, there’s no water in your well,’ ‘...there’s far too little peace, and far too much green,’ and a bitingly sarcastic chorus of ‘before you save the world, save yourself’ – one envisions recent news clips of the hysterical hoarding hordes ditching all calls for civility and the greater good to buy up every available food item, fighting over hand-sanitizer and toilet paper. Markets crashing and industry coming to a halt, with the business class cutting expendables as lives, dreams, and livelihoods are sacrificed to the cold calculus of corporate reason. The selfish, not the selfless will survive; “save yourself” is the epithet of our time.

The new single follows fast on the heels of Keene’s recent comeback EP It Is What It Is, just released in January following a steady stream of original singles dropping every month or so since last fall. The consistent flow and range of the new material being churned out foreshadows the broad stylistic eclecticism and bold subject matter that can be expected on his upcoming album Them and Us, slated to be released later this year. It is also indicative of a deeply personal renaissance Keene has been undergoing as an artist.

A true songwriter’s songwriter, Keene, has focussed himself for most of his career on honing the craft of songwriting and collaboration with other musicians, more so than chasing record deals and fame. But after working for years in the industry as a well-respected musician and songwriter – collaborating with an impressive roster of musicians and achieving more than a few notable successes in the 90s and early 2000s – life and love-lost took Keene down a road of heavy heartache that put his songwriting on an extended hiatus.

“I'll tell you what happened,” reflects Keene. “I went through a lot of tragedy in my life. It took a while, seven years, for me to get over it. And then one day, like a switch,  I just was ...and I started a new life for myself and put ache in the past."

True to his belief that the story is best left open to the listener’s interpretation, Keene doesn’t go into too much detail in the telling of it. But the clues and characters are littered throughout the flood of songs that followed the sudden breaking of a years long writer’s block. No stranger to music’s strange ability to nullify the ach of loss, Keene harnessed the fermenting pain of love-lost and lessons learned to fuel a reawakening of his songwriting chops.

The songs on Keene’s upcoming album run the gamut from the political to the starkly anti-political, from lovesick ballads to whisky infused odes to the foggy darlings of one night stands. Spanning rock, blues, folk and country, Keene gives nods to his primary influences, which range in genre and style from folk song-crafting icons like Bob Dylan, Leonard Cohen, and Tom Waits to the blues mavericks like Howlin’ Wolf, Muddy Waters, and Elmore James, and further afield to include the likes of composer/pianist Henry Mancini, country iconoclast Hank Williams ...and even Pink Floyd.

“I'm very lucky, at this stage in my life, that I'm writing and producing more songs than I ever have ...at a faster rate. The bad news is the songs keep me up at night, and they haunt my dreams. And I'm constantly reaching for paper.”

Keene’s newly rising star is a sign that there are listeners out there who hunger for his straightforwardly audacious yet classic style of songwriting. Rediscovered by industry veteran Jason Jordan just prior to ONErpm poaching the exec from a position as SVP of Republic Records, Keene has been in no hurry to sign to a major label or conform his sound. When Jordan left Republic in 2018, sensing a seismic shift in the industry, one of his first moves as North America managing director of ONErpm was to sign Keene and release the series of singles that have revitalized his career. Now Keene has moved on to Symphonic for the upcoming release with Jordan taking on the role of actively managing the artist.

All of the upcoming album’s tracks will be produced by Keene himself, and recorded and mixed by Joseph DeMaio just blocks from the Atlantic Ocean in Long Branch, New Jersey’s Shorefire Recording Studios, using the last analog Helios console ever built. Having found a classic  analog sound and collaborative dynamic that works for him, Keene is keeping on the same roster of musicians for the the new, including Rich Scannella on drums, Joseph Chiarolanza on bass, Matt O'Ree on guitar, Joseph Napolitano on pedal steel,  Arne Wendt on keys, and Michele Weir or Layonne Holmes doing background vocals.