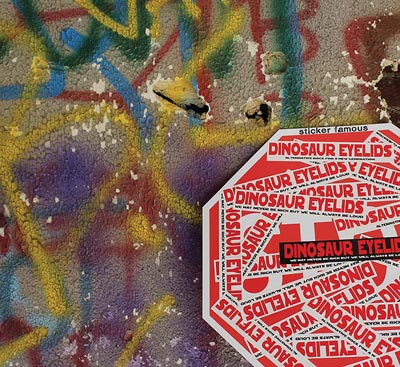 I sometimes wonder what ’90s indie rockers Dinosaur Jr. would think of New Brunswick grunge veterans Dinosaur Eyelids. Would they like their fusion of pop, punk and heavy noise? Would they think sometimes they are a bit to derivative for their own good?

They might think both of the Lids’ latest LP, “Sticker Shock,” which kicks off with what may be one of the band’s best songs, “Shake,” an exciting rager that could make a dead man dance while making a stoner smile. “Shake” is the Makin Waves Song of the Week. You can hear the track 30 times at 5 and 11 a.m., 5 p.m. and midnight daily through Wednesday on thepenguinrocks.com and  6:45 p.m. on Friday and Monday on the station’s “Radio Jersey” show.

But from there, “Sticker Shock” doesn’t offer much in the way of originality. That doesn’t mean it isn’t good. It is. But it is with the band’s influences stickered all off their flannel sleeves. Overt nods to Nirvana, The Strokes, Nuggets and Neil Young make up the rest of the 11-song collection.

“Shake” may be their best song, but they’ve yet to top their best LP, 2014’s “Bypass to Nowhere.” That said, I congratulate this band on still rocking out six years later, as well as five years before that, which is an impressive feat in today’s fickle, fleeting world of indie rock.