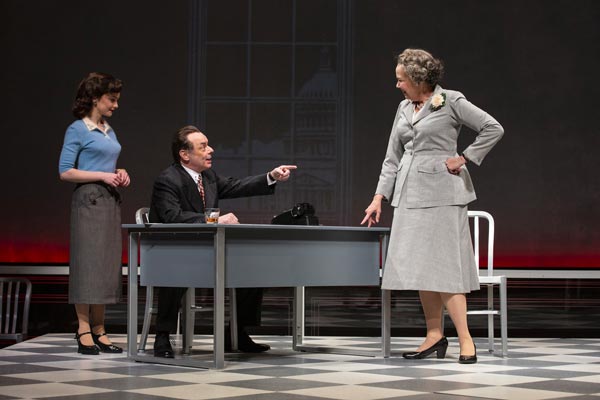 Political polemics abound, especially in an election year where viruses get politicized.  This concept is theatricalized in the George Street Playhouse’s production of Joe DiPietro’s play Conscience.

The scene, of course, is Washington, D.C. in the 1950s where Senator Margaret Chase Smith (Harriet Harris), a Republican and the first woman elected in her own right to both the House of Representatives and the U.S. Senate takes on fellow Senator Joseph McCarthy (Lee Sellars).  McCarthy finds self-justified righteousness in outing Communists in the name of patriotism.  Each is armed with their seconds: the closeted aide William Lewis (Mark Junek) for Smith and an equally ambitious Jean Kerr (Cathryn Wake).  The foursome stalk their own moral high ground to ensure their political safety.

DiPietro’s drama is an arch historical look at Smith’s attempt to keep McCarthy in check and the damage he wrought for revenge.  That’s an overly simplistic narrative summary.  But his script is full of speeches direct from the floor of Congress and the stump illustrating the pragmatism and patriotism of both Senators.  Harris delivers rejoinders of wit laced with bile.  It’s a robust calculated tempered performance of grace.  And she shines in giving voice in imperiled times. 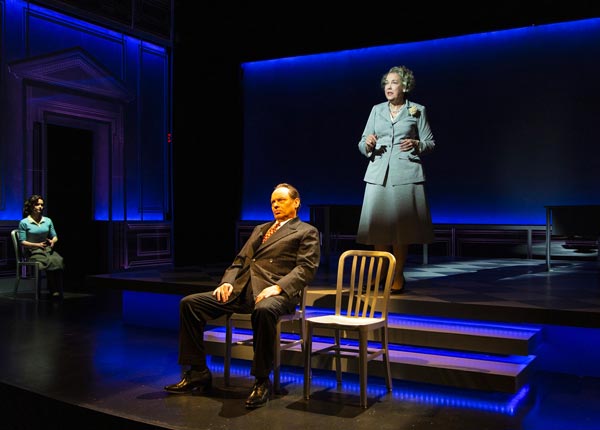 Smith quickly sizes up McCarthy for her political advancement and his personal liabilities -- booze and treatment of women predominate. As the play progresses, Harris’ characterization blossoms growing steelier and calculated.  Shadings of vulnerability bleed from her pragmatism and stand.  While Sellars bellows into blustery caricature.  The lack of his performance’s subtlety particularly in act two grates and leaves the audience callow.  Perhaps this is calculated on Director David Saint’s part.  Better are Smith’s scenes with Wake who grows in ambition as McCarthy’s career rises.  Here DiPietro is comfortable and the stakes are higher and more dramatic.  Both actresses rise in these moments, their cheeks shading with color and the audience edge towards the end of their seats.  This is Conscience at its best.

James Youmans’s gunmetal gray nicely conveys an arena with glass portals to the Senate.  His narrative projections unnecessarily set the scene of various offices while the larger ones beautifully convey the senate train or Smith’s home.  DiPietro’s script often has the actors lamely setting scenes, reducing them to narrators shunting emotional impact.  Largely the production ably and aptly gives voice to the naked ambition of D.C. – letting characters speak as themselves shines the drama brighter. 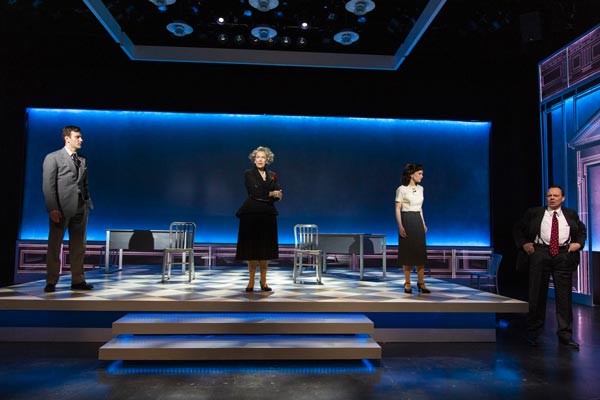