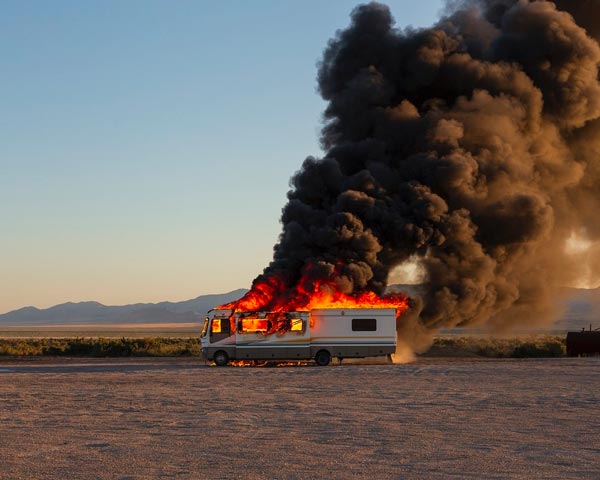 The American road is a theme that winds through some of the most well-known works of American photographers such as Stephen Shore, Ed Ruscha, Alec Soth and many others from the United States and abroad. Photographers have travelled through vast landscapes to document this country and all that surrounds the road: the vistas, the gas stations, the motels, the neon signs, the diners and the people that depict America’s culture.

“The Road is the first in a series of guest-curated shows at the JKC Gallery,” said Michael Chovan-Dalton, Gallery Director. “The show represents the largest number of artists ever presented at the JKC Gallery. By utilizing a monitor, the curators were able to represent approximately 150 artists who masterfully document America’s social and geographical landscapes through the lens of a camera.”

Curators Dana Stirling and Yoav Friedlander, who grew up in a small town in the Israeli desert, described the inspiration behind the exhibit and their affection for American culture.

“We absorbed American culture through movies, TV shows and pop culture,” explained the curators. “We were raised an ocean away from the American landscape – thousands of miles away from the nearest stretch of American highway – yet our perception of this country was shaped by these depictions that are curated into this show today. The great American road trip represented freedom, the occasional unknown ... the great variety of landscapes — from a thick forest to an empty desert.”

After moving to New York several years ago, Stirling and Friedlander began living the American visual for themselves. “We suddenly found ourselves not as outside spectators, but as participants of the visual bank that is being created every second of every day by artists all across the nation,” they said.

Dana Stirling is a still life and fine art photographer born in Jerusalem, Israel and based in Queens, New York. She received her Master of Fine Arts in Photography, Video, and related media in 2016 from the School of Visual Arts in New York City. Stirling also received a Bachelor of Arts from Hadassah College Jerusalem in Photographic Communications in 2013.

Yoav Friedlander is a miniature scale model fine artist and photographer. Born in Israel in 1985, Yoav received his Bachelor of Arts in Photographic Communications from Hadassah Academic College Jerusalem in 2011 and graduated in 2014 with a Master of Fine Arts in Photography, Video and related media from the School of Visual Arts in New York City.

Together, Stirling and Friedlander founded Float Photo magazine (www.floatmagazine.us) in 2014 with the goal to share and celebrate the photographic work of a versatile roster of contemporary photographers from around the world.

The public is invited to a reception with curators, Stirling and Friedlander, Thursday, March 12 from 5:00pm-7:00pm with a talk at 6:00pm at the JKC Gallery, Trenton Hall, 137 North Broad Street in Trenton.

The JKC Gallery is open Tuesday and Thursday from 12:30pm to 5:30pm, Friday from 9:00am to 3:00pm, and Saturday from 10:00am to 2:00pm, or by appointment at jkcgallery@mccc.edu. Information about this show, the JKC Gallery and upcoming shows is available on the JKC Gallery website at www.mccc.edu/jkcgallery.