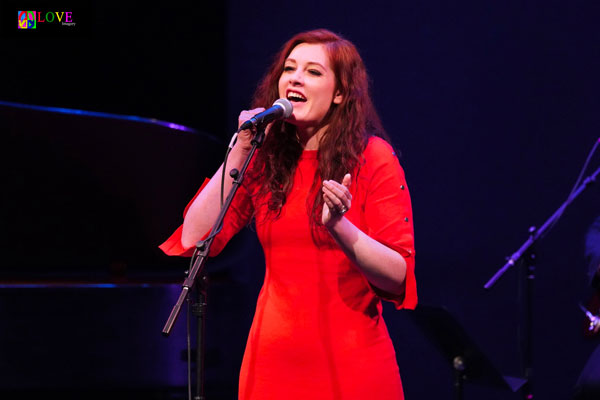 An audience comprised of music lovers of all ages is making its way inside Toms River, NJ’s Grunin Center of the Arts this Friday, February 21, 2020 for a unique concert by the award-winning singer/songwriter Mandy Harvey.

Mandy Harvey was born in Cincinnati, Ohio in 1988. Spending her younger years in Florida, she experienced hearing problems and underwent several surgeries to try to correct them. Despite her hearing difficulties, she sang throughout her childhood, and after moving to Colorado, was recognized for her musical talent in high school.

At the age of 18, however, as a Vocal Music Education major at Colorado State University, she lost her remaining hearing and quit music.

With the aid of muscle memory, visual tuners, and extensive practice, Harvey learned how to produce the correct pitches when singing. She began to perform in clubs and lounges in Denver and even recorded three jazz albums. 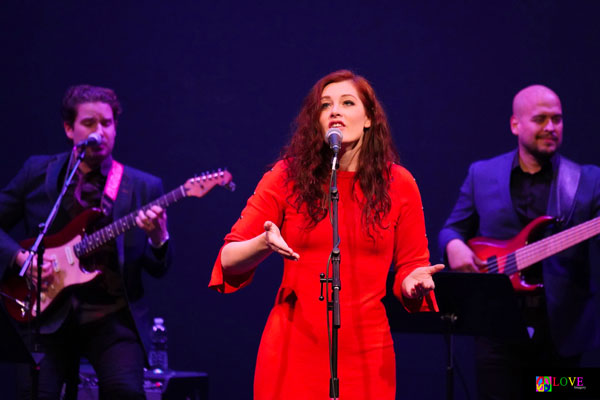 In 2017, Harvey appeared on America’s Got Talent where she performed her original song, “Try,” while accompanying herself on the ukulele. Judge Simon Cowell was so moved by her performance that he awarded her the “Golden Buzzer,” sending her automatically to the nationally-broadcast live shows to compete. Ultimately, she took fourth place in the competition.

These days, Harvey appears in concerts and does speaking engagements, in addition to serving as an ambassador to the nonprofit organization, No Barriers, to help people with disabilities overcome obstacles. She is also the author of Sensing the Rhythm: Finding My Voice in a World Without Sound, a book which is designed to inspire readers to pursue their dreams.

Inside the cozy Grunin Center auditorium, the lights dim and a group of four musicians — pianist Alfred Sheppard, guitarist Will Thomas Scecina, bassist Tito Vallejo, and drummer Dave Hamar — take the stage. Soon, Mandy Harvey makes her entrance, smiling and waving as she opens with a cover version of Spiral Starecase’s “More Today Than Yesterday.” 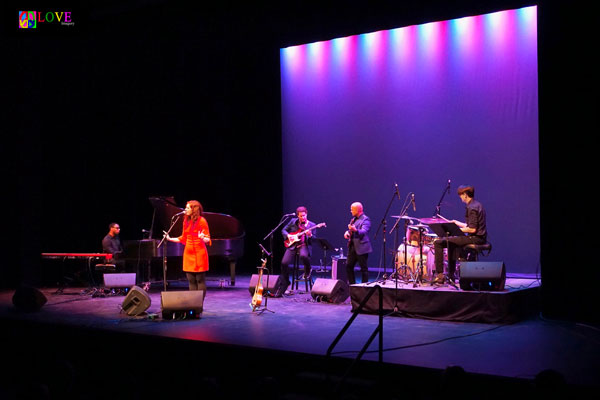 Her voice soft and resonant, Harvey signs as she sings, her sweet soprano sound gently floating out over the audience. Perfectly hitting every pitch, she sings with dynamics — notably pianissimo in her high register — impressing audience members with her soothing tone and creative song style. The crowd reacts with avid applause.

Harvey greets the audience signing as she speaks, “How are you? I’m so excited. It’s amazing to be here in New Jersey!”

Launching into “Envy,” Harvey soulfully performs this jazz-infused soft-rock number with dynamics and expression. Standing in her stocking feet so she can feel the vibrations through the floor, Harvey’s clear voice echoes throughout the Grunin Center auditorium. 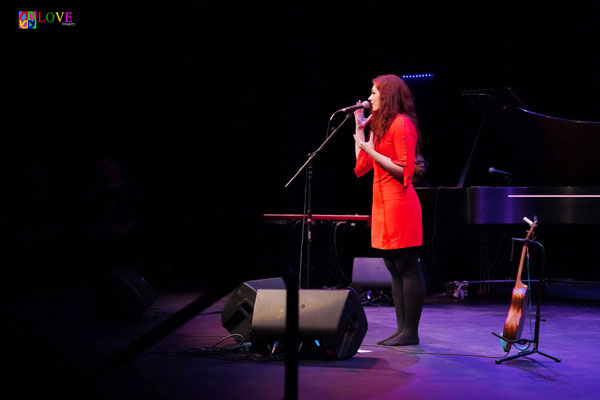 After singing, “Please save me from the person I’ve become/The world is changed into a place that can’t be won/Though I know I should leave it all behind/There’s so many things that I wish were mine,” Harvey turns to watch guitarist Will Thomas Scecina as he solos.

Moving on to a cover version of The Beach Boys’ “God Only Knows,” Harvey’s rich lower vocal register is featured. Lightly chanting on the arrangement’s instrumental section, Harvey moves over to the piano for Alfred Sheppard’s tasty solo, her fingers gripping the edge of the instrument so she can feel the vibrations coming from inside it. Guitarist Scecina harmonizes with Harvey on this lovely rendition of Brian Wilson’s classic composition for Pet Sounds which is performed with grace and simplicity by the entire band. 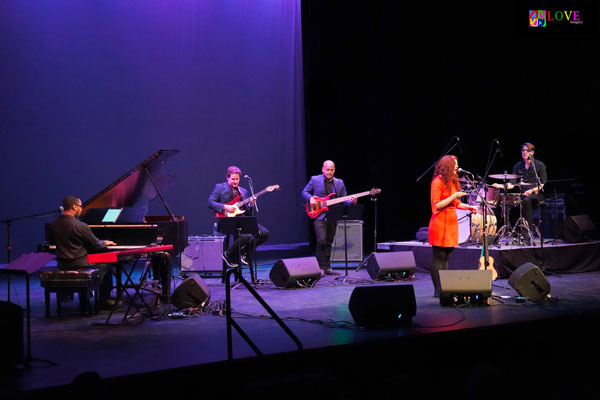 Following “Waking Up,” an original upbeat pop tune on which Harvey sings “This won’t be the last time I think of you/But this is your last song/I’m tired of going in circles/Trying to figure out what I’ve done wrong,” she tells a compelling story of an event which took place when she was a student in junior high school.

Recalls Harvey, “I had an encounter with a homeless woman who told me she had been a ballerina in Russia and came to America to dance. She was in an accident and both her ankles were crushed, so she gave up.”

Harvey explains that when she went on to lose her own hearing ten years later, she decided she wasn’t going to give up, announcing, “This song is about getting up off the floor and running.” 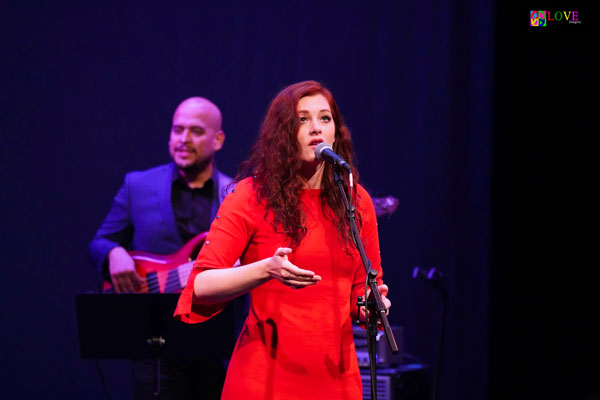 Picking up the ukulele, Harvey performs another original entitled “Mara’s Song.” On this beautiful ballad, a sign language interpreter signs as Harvey plays and sings, “Come walk my friend with me/To a place that we always dreamed/You will know how it feels/To be right where you’re supposed to be.”

A highlight of Harvey’s set is her performance of her composition, “Instantly.” On this rhythmic folk-rocker, she solidly connects with the audience as she sings, “They say change happens when you change your mind/It’s not all at once, but little pieces at a time/And I keep hoping it’ll change instantly/You can take my heart, take my breath, my life/I would give it all just to make you feel alright/But I keep hoping you will change instantly.” 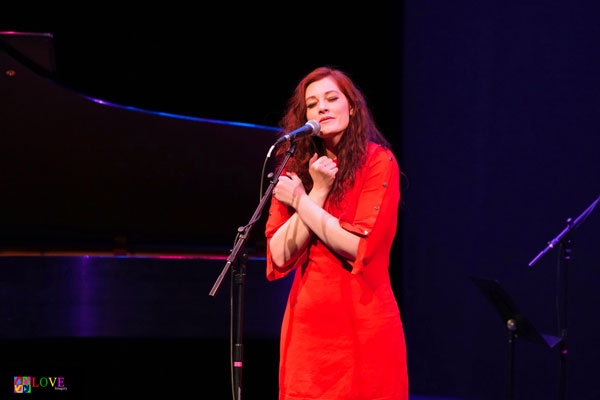 Pantomiming Sheppard’s piano solo as he plays, this intuitive performer finishes out the performance, the quality of her musicianship enhanced by the beauty of her expressive sign language.

After “One Minute,” an original anthemic pop ballad, Harvey introduces each of her band members and explains how her next song “is about knowing that you’re taking a leap of faith.”

Like an actress in terms of her expressive interpretation, Harvey exposes her feelings and puts herself on display performing this upbeat Latin-influenced pop tune. Her vocal is effortless — she switches registers with ease and accuracy in a way that some hearing singers cannot achieve — and her musicality is stunning. 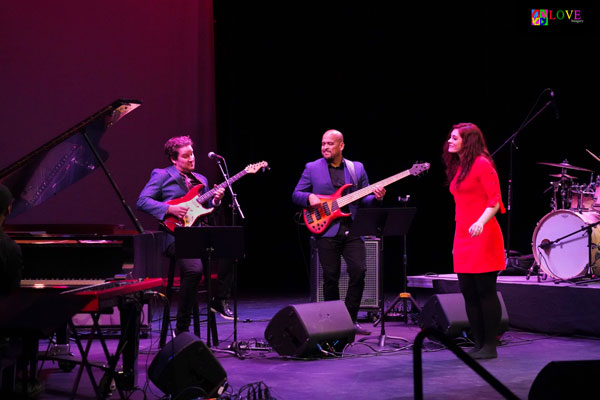 After the crowd reacts with avid applause, Harvey explains how she constantly tries to move past personal fears, acknowledging, “I jumped out of a plane, and I’m now trying to get over my fear of swimming in the ocean,” before noting, “I’ve been pushing myself to play piano, so I’d like to perform this next song for you.”

Playing the piano expressively and with precision, Harvey presents a poignant cover rendition of Radiohead’s “Creep.” Singing “You’re so very special/God, I wish I was special/But I’m a creep/I’m a weirdo/What the hell am I doing here?/I don’t belong here,” the arrangement builds as the rest of the band joins Harvey’s soaring vocal on this expressive power ballad.

Taking her place back at center stage, Harvey picks up her ukulele to present the song she performed when she auditioned for America’s Got Talent — her original composition, “Try.” 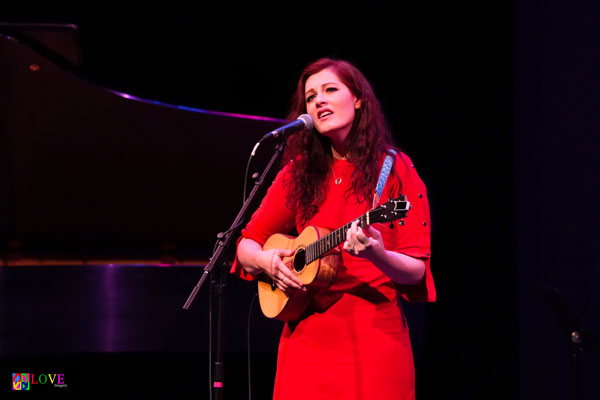 Strumming the ukulele and vocalizing as an interpreter signs the compelling lyrics, “I don’t feel the way I used to/The sky is grey much more than it is blue/But I know one day I’ll get through/And I’ll take my place again/So I will try,” Harvey’s sweet soprano communicates her personal story of triumph on this upbeat folk-rocker.

The crowd reacts with large applause and Sheppard plays the beautiful introduction to Leonard Cohen’s “Hallelujah” on the piano. Harvey sings the first verse and Scecina sings the second verse, after which the pair harmonizes together on the melancholy chorus. Bassist Tito Vallejo sweetly solos before the number ends to avid applause.

Harvey and Co. conclude tonight’s concert with a song Harvey calls “one of the band’s favorites” — a cover rendition of The Animals’ “House of the Rising Sun.” Her voice sounding particularly expressive in terms of both dynamics and tone as she sings, Harvey eventually moves to the piano and places her hands on the edge to feel the vibrations while guitar, bass, and drums accompany Sheppard’s tasty solo. 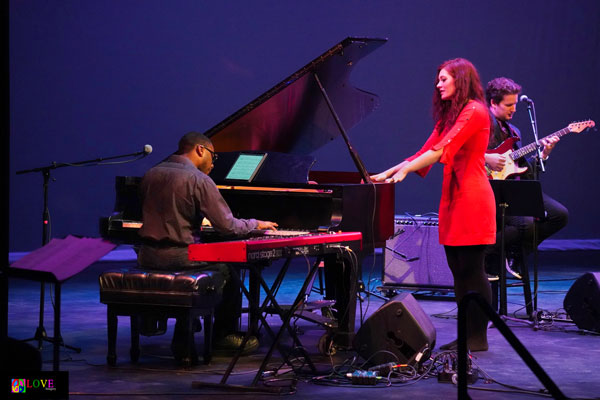 The crowd gives Harvey and her band a standing ovation and she and the musicians return with an encore — a cover rendition of Bob Dylan’s “Don’t Think Twice, It’s All Right.” Starting with ukulele and voice, the musicians join Harvey, each taking a turn in the spotlight as a featured instrumentalist. At the conclusion, the crowd again stands for Harvey and the band and audience members hold their hands up while quickly shaking them back and forth in silent sign language applause to Harvey’s delight.

As audience members make their way out of the Grunin Center auditorium, we take a moment to chat with several music lovers in the crowd who share their reactions to tonight’s presentation.

Remarks Dana from Lacey, “I loved this concert!” explaining, “It was surreal watching Mandy Harvey sign while she was singing — she really gets into it — and you can see how the signs provide a whole new level of meaning to each song.”

Dana’s friend, Jaclyn from Lacey, agrees adding, “I thought it was really good, and her signing added to the overall performance,” prior to noting, “I also liked how Mandy Harvey provided the backstory to some of her songs — it enhanced the experience knowing even more about the music.”

Steve from Toms River declares, “I loved this show! I’ve been following Mandy Harvey since she was on America’s Got Talent, and I’ve read her book, too. She’s just amazing — she’s overcome so many obstacles — and her interpretation of the music was just fascinating,” prior to concluding, “All in all, I had a great time tonight.”

Loretta from Manchester asserts, “It was a beautiful show — a very energetic performance — and there was a lot of love and different emotions expressed in Mandy Harvey’s music,” before noting, “And the band was great, too.” 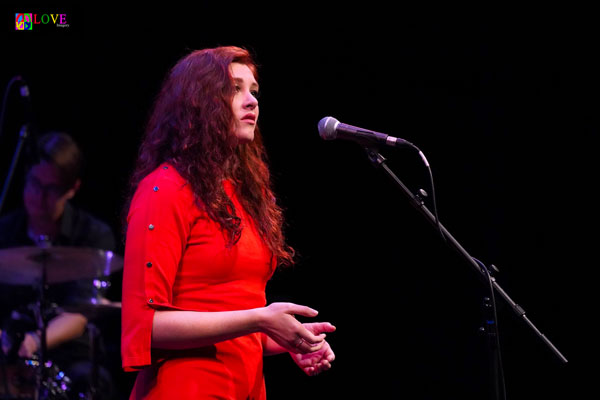 Gail from Beachwood concurs adding, “Wow — it was just amazing,” explaining, “I teach fifth grade special education students and I can’t wait to share Mandy Harvey’s “You can do it” message with them,” and pointing out, “and I just loved the way she worked with her musicians — to me, they’re more then just a band, they’re a team.”

Lastly, we chat Tina, a mom from Toms River, who is here with her daughter, Abigail. Whereas Abigail acknowledges, “Mandy Harvey is one of my favorite singers,” Tina declares, “We love Mandy Harvey a lot — she’s amazing,” before exclaiming, “She’s an inspiration!” 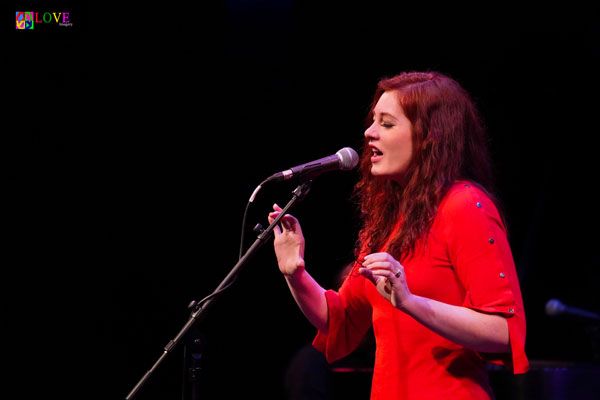 To learn more about Mandy Harvey, please go to mandyharveymusic.com. For information on upcoming concerts at Toms River, NJ’s Grunin Center of the Arts — including Artrageous on March 9, singer/dancer Lucia Jackson on March 22, Louis Prima, Jr. on April 18, and Shawn Colvin on May 3 — please click on grunincenter.org. 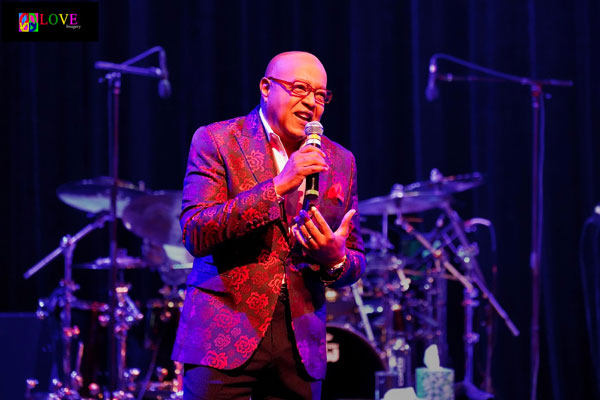 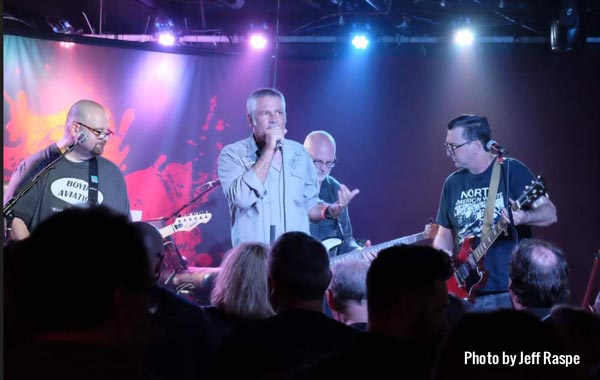