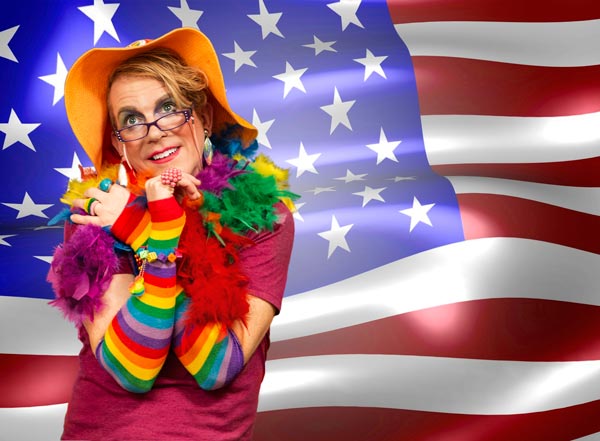 Leola is your new favorite Kelly Clarkson-worshipping senior citizen and redneck lesbian legend, and she is on a mission to save the world one audience at a time!

“Life is like a casserole and it’s up to each of us to be the can of cream of mushroom soup that holds it all together.” Award-winning writer/performer Will Nolan guides you through the complexities of the LGBTQYMCA+ community – everything you need to know from GAY to Z!

Nolan hails from Atlanta and lives in Northern New Jersey with his husband and son. He says the timing for Leola has never felt more right. “It’s been a rough couple of years for this country, and trying to figure out a way to make people laugh has been hard. Laughter has such healing capacity, but when nothing in the world seems funny, that can be a challenge. Suddenly, I realized that Leola is the perfect lady to help this country heal. With her proud sexuality, gentle guidance and great sense of style, it just made sense that she would tour this country (at least 3-4 states) and celebrate – not just gay pride or female pride, but human pride. Yes, you’re going to learn some gay history – and will probably need to unlearn some of the gay history she tries to teach (!) – but more importantly, I hope audiences walk away feeling special. Leola’s is a voice that encourages you to be yourself – flaws and all – and to be kind and to laugh. This show is about finding our strength to stand up and fight negativity with love...and the right shade of lipstick.”

Leola is the creation of writer/performer Will Nolan, who lives in Northern New Jersey with his husband and son. Winner of the Long Island City Flying Solo Festival two years in a row, Leola has appeared across the country in fringe festivals, regional theaters, and middle-aged birthday parties in what’s been called “Dame Edna’s hillbilly cousin giving a TED Talk.”

Luna Stage is dedicated to bringing communities together for artistic events that spark conversations and create understanding and change. Firmly rooted in New Jersey’s Valley Arts District – a crossroads of cultures – Luna celebrates the diverse voices that surround us. Their educational programming is designed to eliminate barriers to participation and nurture the next generation of audiences and artists.

Luna’s classes for children and adults, and its developmental programs for early career artists, inspire community members to nurture their own creativity and vision.

Luna Stage has contributed to the development of over 80 new works for the stage, earning a reputation for artistic excellence. Some of those plays have gone on to productions in New York City and beyond. Luna’s unique approach to producing, as well as the work itself, fosters an environment of inclusivity, understanding, and infinite possibility.