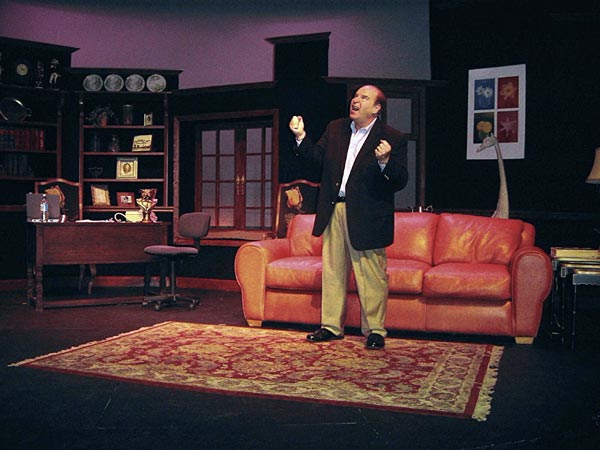 This event has been cancelled


(WEST LONG BRANCH, NJ) -- The Center for the Arts at Monmouth University presents “My Mother’s Italian, My Father’s Jewish & I’m in Therapy” - the award winning solo show by playwright, comedy writer and comic storyteller Steve Solomon - on March 28 at 8:00pm. The one-night stand at the Pollak Theatre finds the Brooklyn-born Solomon returning to his roots, as he makes his inaugural appearance on the Monmouth campus with the original performance piece that’s earned him critical acclaim, Broadway stardom, and the kind of career-cornerstone franchise that finds him “Still in Therapy” some 13 years after its debut.

A co-presentation of the Jewish Cultural Studies program at Monmouth, the Saturday night event in the 2020 Performing Arts Series spotlights the multi-faceted skills of the Sheepshead Bay native, whose path to becoming a professional humorist twisted through some highly unlikely but successful stints as a physics teacher and public school superintendent on Long Island, and a cable TV executive in the Caribbean. Inspired, as might be expected, by Solomon’s own extended family and multi-ethnic neighbors, “My Mother’s Italian…” uses the star’s gifts for dialects, vocal characterizations and musical interludes, to conjure up dozens of eccentric relatives and other memorable characters from the old stomping grounds.

The results, while rooted in Solomon’s own delightfully mixed-up family tree, transcend the strictly personal; staking out a universal appeal that will resonate with anyone whose loving family relationships come equipped with the sort of comical conflicts that make for a hilarious story. Serving as a form of “Therapy” in itself for audiences from coast to coast, the show elevated its creator from comedy club amateur nights to an engagement as one of the longest running one-man shows in Broadway history. For proof of its enduring appeal, look no further than its many spinoffs and sequels, with titles like ““My Mother’s Italian, My Father’s Jewish & I’m In Still Therapy,” “My Mother’s Italian, My Father’s Jewish & I’m Home for the Holidays,” and “Cannoli, Latkes and Guilt…The Therapy Continues.”

With more than 4,000 performances under his belt, Steve Solomon has brought his first and most famous solo show to audiences in three countries, with nearly one million people laughing along with his stories of crazy parents, pets, neighbors, merchants, old friends, and ex-spouses — conveyed in a way that finds this Doctor of Education transforming a “crowded” solo stage into his most effective comedy classroom.

Tickets for the March 28 performance of “My Mother’s Italian, My Father’s Jewish, & I’m in Therapy” are priced at $35 and $50, with a Gold Circle seating option of $60, and can be reserved through the Monmouth University Performing Arts Box Office at 732-263-6889, or online at www.monmouth.edu/MCA. Tickets for other upcoming Performing Arts events — including Ladies of Laughter (April 4), and the return of Chazz Palminteri in his one-man show “A Bronx Tale” (May 16) — are also on sale now.