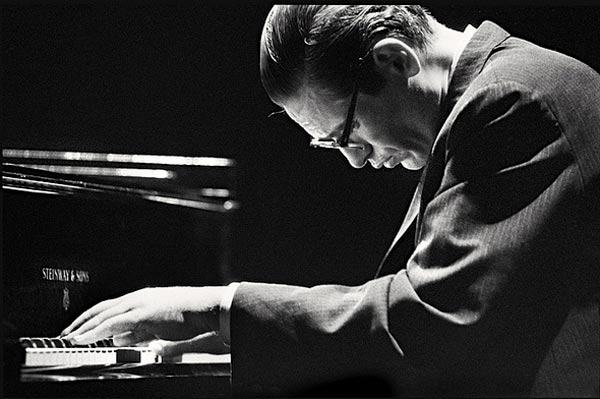 (JERSEY CITY, NJ) -- On Saturday March 7, the NJCU Center for the Arts presents the celebrated documentary Bill Evans: Time Remembered which captures the genius of the legendary pianist through interviews, rare archival footage, and conversations with great musicians such as Jack DeJohnette and Tony Bennett. The program takes place at Ingalls Recital Hall on the Jersey City campus of NJCU and features a pre-screening concert with pianist Joel Zelnik, bassist Gary Mazzaroppi, and drummer David Cox.

The film by Bruce Spiegel received 4-stars from Downbeat magazine and was eight years in the making. This vivid portrait of the jazz legend traces his life from an upbringing in Plainfield, New Jersey through his tragic years of drug addiction and depression. Employing a combination of Bill Evans’ own voice and interviews with friends, family, and bandmates, Spiegel recounts the life and the music of troubled genius whose influence is still felt today.

The evening features a pre-film performance by The Joel Zelnik Trio, which features University graduate Joel Zelnik on piano. A regular performer in the metropolitan area, Zelnik shared a bandstand with Bill Evans at The Village Great in the mid-sixties and was greatly influenced by the innovator. Bassist Gary Mazzaroppi has worked with Marian McPartland, Lionel Hampton, Charlie Byrd, Mark O’Connor, and Les Paul among others. Drummer David Cox is based in North Carolina but performs frequently in the region.

The final Center for the Arts jazz concert of the semester will feature the acclaimed jazz vocalist Svetlana and her virtuoso band in Margaret Williams Theatre for a “Night at the Movies” on Saturday, April 4. The program highlights Oscar-winning songs from the 1930s through to today. The Wall Street Journal called Svetlana an “exceptional vocalist” and she is bringing an all-star ensemble with her, including Wilerm Delisfort on piano, Adi Meyerson on bass, Henry Conerway III on drums, Charlie Caranicas on trumpet and Christopher McBride on sax.

More information and tickets are available for purchase online.  The Bill Evans documentary and performance by The Joel Zelnik Trio will be in Ingalls Recital Hall which is located in Rossey Hall on the campus of NJCU. The Saturday March 7 program begins at 7:00pm and tickets are only $25.00. The parking garage entrance is on Cutler Avenue.

New Jersey City University (NJCU) Center for the Arts is the creative umbrella for the University’s public programs in the performing, visual, film, and literary arts. A cultural hub of metro-north Jersey, NJCU has strong arts departments, led by accomplished faculty, and presents an array of guest artists and speakers in addition to student performances.