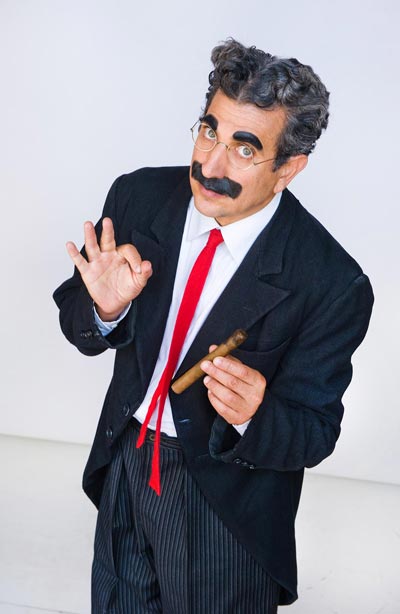 (MORRISTOWN, NJ) -- Award-winning actor and director Frank Ferrante brings his acclaimed portrayal of Groucho Marx to Mayo Performing Arts Center on Friday, March 27 at 8:00pm. Tickets for An Evening with Groucho range from $29-$59.

The two-act comedy consists of the funniest Groucho one-liners, anecdotes and songs including "Hooray for Captain Spalding," and "Lydia, the Tattooed Lady." The audience literally becomes part of the show as Ferrante ad-libs his way throughout the performance in grand Groucho style. Accompanied by his onstage pianist, Ferrante portrays the young Groucho of stage and film and reacquaints us with the likes of brothers Harpo, Chico, Zeppo and Gummo, Charlie Chaplin, W.C. Fields and Marx foil Margaret Dumont.

Frank Ferrante is an actor, director and producer described by The New York Times as "the greatest living interpreter of Groucho Marx's material." Animal Crackers and A Night at the Opera co-author Morrie Ryskind called him "the only actor aside from Groucho who delivered my lines as they were intended."

Discovered by Groucho's son Arthur when Frank was a drama student at the University of Southern California, Frank originated the off-Broadway title role in Groucho: A Life in Revue (written by Arthur) portraying the comedian from age 15 to 85. For this role, Frank earned New York's Theatre World Award and an Outer Critics Circle nomination. He reprised the role in London's West End and was nominated for the Laurence Olivier Award for 'Comedy Performance of the Year.' Frank played the Groucho role in the off-Broadway revival of The Cocoanuts and has played Captain Spalding in several productions of Animal Crackers winning a Connecticut Critics Circle Award for his portrayal at Goodspeed Opera House and a Helen Hayes nomination in Washington D.C. at Arena Stage. Frank has now performed the Groucho role over 2500 times in more than 400 cities.

Mayo Performing Arts Center is located at 100 South Street in Morristown, New Jersey. MPAC, a 501(c)(3) nonprofit organization, presents a wide range of programs that entertain, enrich, and educate the diverse population of the region and enhance the economic vitality of Northern New Jersey. The 2019-2020 season is made possible, in part, by a grant the New Jersey State Council on the Arts/Department of State, a Partner Agency of the National Endowment for the Arts, as well as support received from the F.M. Kirby Foundation and numerous corporations, foundations and individuals. Mayo Performing Arts Center was named 2016 Outstanding Historic Theatre by the League of Historic American Theatres, and is ranked in the top 50 mid-sized performing arts centers by Pollstar Magazine.