Lewis Center for the Arts Presents "Macbeth" by William Shakespeare 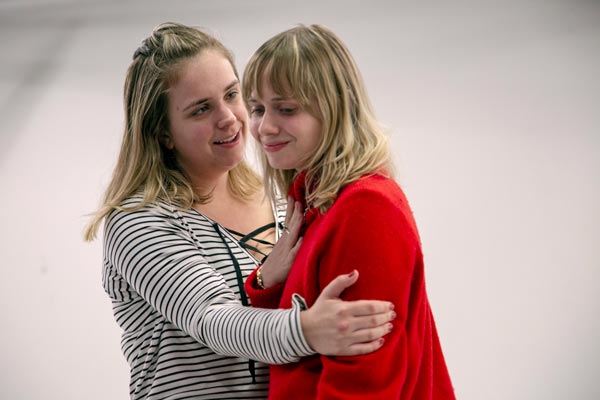 (PRINCETON, NJ) -- The Lewis Center for the Arts’ Program in Theater at Princeton University will present Macbeth by William Shakespeare in a re-imagined production with an entirely female-presenting and non-binary cast, exploring the manifestations of gender and power that are already present and all-encompassing in the original text. Performances are on February 28 and 29 and March 5, 6 and 7 at 8:00p.m. in the Berlind Theatre at McCarter Theatre Center, 91 University Place.

The Tragedy of Macbeth, the full title of Shakespeare’s play, was first performed in 1608. In the play, Scottish general Macbeth receives a prophecy from a trio of witches that one day Macbeth will become King of Scotland. Consumed by ambition and spurred to action by Lady Macbeth, the general murders King Duncan and takes the Scottish throne. Wracked with guilt and paranoia, Macbeth is forced to commit more and more murders for protection from enmity and suspicion and soon becomes a tyrannical ruler. The bloodbath and consequent civil war swiftly take Macbeth and Lady Macbeth into the realms of madness and death.

Albertson, Eldridge and Spare proposed their concept for an all-female production as their independent thesis work in the Program in Theater where each senior is pursuing a certificate (similar to a minor) in addition to their major. Spare had written about Macbeth for a course in dramaturgy and she and Albertson knew they wanted to act together in a production. They were in a two-semester course on Shakespeare and were interested in exploring gender and power in collaboration with all-female or nonbinary cast. In a junior theater seminar course with Broadway director John Doyle, the pair connected with Eldridge, who had similar interests and had been growing her skills in theater design and film at Princeton. The trio approached Lecturer in Theater and professional theater director Araoz to helm the project.

While Macbeth grapples with many themes and issues, from the supernatural, to violence, to power, to guilt, all at full-force intensity, the project team felt the question of gender is typically brushed aside in productions. They note that the play, though, is deeply interested in the way in which the traditional gender binary is established and maintained; the characters must be either a man or a woman. Agency lays unequivocally with the masculine, with kings like Duncan and eventually Macbeth, while women like Lady Macbeth must exercise her power through the men or shed her femininity and aim towards masculinity in order to succeed. Characters that seem to fall outside of this binary — the witches who are described as bearded women by Banquo — are othered and isolated under the label of “Weird Sister.” The project team also observed that Shakespeare’s play would have originally been written for and performed by an all-male cast and asked, what if that were completely reversed? What does it mean to be a man and can a woman be man-like in their approach to grief, violence, ambition and power? And what does it look like when a female body carries out the actions of those that have traditionally been considered male, and what are the assumptions of what male or female villains should look like and dress? “Bloody, violent and drenched in pink” is a brief summary of how the show team describes their production.

Albertson, who is from New York City and pursuing a degree in English and certificates in American studies and theater at Princeton, is a professional actor. She has been performing professionally since 2008 on New York stages, in film, and on television including Law & Order SVU, The Good Wife, the Netflix docudrama The Family, and, since 2015, as Sutton Foster’s daughter, Caitlin Miller, on the television series Younger. She has performed at Princeton in the Lewis Center’s production of Into the Woods and the first production of Branden Jacobs-Jenkins’ new play Gurls. She has been involved in the student groups Theatre Intime and Quipfire improv comedy, and was assistant producer of a Women in Comedy Festival at Princeton. In December, the Lewis Center produced Albertson’s first effort writing a full-length play, Feminine Products, which represented her independent thesis work in English and the Program in Theater.

Spare, who is from outside Boston and is majoring in English and pursuing certificates in theater, music theater, and European cultural studies, has been involved in theater since the age of five. She worked professionally as an actor between the ages of nine and 14, performing in musicals and plays in Boston and New York City and in a national tour of the musical Annie. She was interested in attending a university where she could pursue academics and professional theater training and found Princeton offered the greatest opportunity to do both. She has appeared in a number of Program in Theater productions over the past four years including The Three Sisters, Hairspray, Into the Woods, a new play by Migdalia Cruz, Fun Home, Phèdre, and in workshop productions of two new musicals. In November she was featured in the title role of the Lewis Center’s production of Mother Courage and her Children as her senior thesis work in the Program in Music Theater. She has also performed with Princeton’s Triangle Club and the student theater groups Theater Intime and Princeton University Players, serving on the boards of both. She is also involved in the new student group Playwrights Guild. After graduation Spare plans to resume her professional career in theater.

Eldridge, who grew up in Louisville, Kentucky, is majoring in visual arts with a focus on filmmaking and pursuing certificates in computer science, theater and music theater. They had an interest in theater before coming to Princeton and had done some acting, but since coming to Princeton has become more involved in theatrical design and the role design plays in telling a story. Their design for the production, which is being approached with as much camp and comedic ethos as the tragic elements of the play, is intended to highlight the blurring of gender assumptions with quantities of pink, sequins and glitter alongside the violence of blood and gore.

Araoz is a stage director of theater and opera as well as an actress, working internationally, Off-Broadway and across the country The Latino Theatre Commons named her creation of Two Arms and a Noise, a physical theatre piece about the life of an indigenous Peruvian woman, one of "36  plays and writers that everyone should know." Two Arms and a Noise will next perform at the Bucharest International Theatre Platform in Romania. The Drama League recently named Araoz the inaugural Beatrice Terry Artist-In-Residence, where she completed her commissioned play Plastic Drastic, an environmentally-aware music-theater commedia piece inspired by The Odyssey, Rime of the Ancient Mariner, and Hansel and Gretel, which she also directed for Omaha’s Rose Theatre. Araoz recently directed the collaboratively-created Off-Broadway piece Architecture of Becoming by Kara Corthron, Sarah Gancher, Virginia Grise, Dipika Guha, Lauren Yee (Women’s Project at City Center), Octavio Solis' Prospect (Boundless Theatre Company), and Mac Wellman’s world premiere plays Wu World Woo and Horrocks and Toutatis too (Sleeping Weazel at ArtsEmerson). Internationally, she directed the world premiere of Li Tong Chen's The Power in Beijing, the first English-language play commercially produced in Beijing, and A Midsummer Night’s Dream for Prague Shakespeare Festival in the Czech Republic. Opera productions include La traviata (New York City Opera at BAM’s Howard Gilman Opera House), Lucia di Lammermoor (Opera North), Falstaff with Sir Thomas Allen (Brooklyn Philharmonic at BAM’s Howard Gilman Opera House), choreography for Latin Lovers arranged by Steven Blier (Glimmerglass Opera), and choreography for Sir Jonathan Miller's La traviata (Vancouver Opera). Recent new play workshops include Tiny People by Christopher Oscar Peña (Two River Theatre), River of Gruel by Sibyl Kempson (New Dramatists), Megastasis by Kia Corthron (New York Theatre Workshop, Yale University), and Welcome to Fear City by Kara Lee Corthron (Labyrinth Theatre). As a director, Araoz is attracted to epic stories, and her productions are known for huge dance-like theatrics and acutely naturalistic acting. Her operetta War Music, which she adapted with composer Paul Philips from Christopher Logue's retelling of the Iliad and devised with six performers, stages the bloodiest scenes from the Trojan War. War Music, commissioned by performance ensemble Aurea for the FirstWorks Festival, toured New England and was also presented by the New York Institute for the Humanities, Chicago Humanities Festival, and the Chorus of Westerly. With New York’s St. Fortune Collective, she directed the site-specific theatrical event Wood Music, which toured through and around the historic Florence Mill in Omaha and turned the entire building into a musical instrument for the audience to play with the band nestled inside. She regularly teaches acting at universities and young artist programs. Araoz is a New York Theatre Workshop Usual Suspect, a Time Warner Foundation Fellow Alum of the Director’s Lab at Women’s Project Theatre, a New Georges’ Affiliated Artist and Audrey Resident, and a recipient of the Dr. David Farrar Opera Stage Director Grant. She is a founding member of The Sol Project and will direct their inaugural production of Hilary Bettis' Alligator with New Georges. She holds her M.F.A. in Acting from the University of Texas at Austin.

Faculty and guest artist advisors on the project include Lawrence Moten as scenic advisor, Tess James as lighting advisor, Rob Kaplowitz as sound advisor, and Michael Cadden as dramaturgical advisor.

The Berlind Theatre at McCarter Theatre Center is an accessible venue with details available here.  Assistive listening devices are available upon request when attending a performance. Patrons in need of other access accommodations are invited to contact the Lewis Center at 609-258-5262 or LewisCtr-Comm@princeton.edu for assistance at least two weeks prior to the selected performance.

Tickets are $12 in advance of show dates, $10 for students, $12 seniors; $17 purchased the day of performances, and are available through McCarter Theatre box office or at mccarter.org or by calling 609-258-2787.

To learn more about this event, the Program in Theater, and the over 100 performances, exhibitions, readings, screenings, concerts, and lectures presented each year at the Lewis Center, most of them free, visit arts.princeton.edu.