Mandy Harvey To Perform and Hold Workshops At Kean Stage 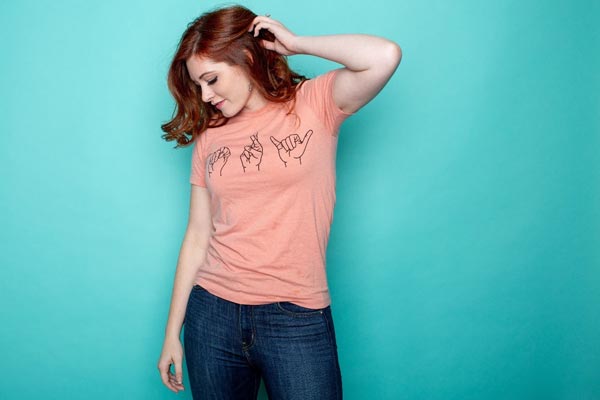 (HILLSIDE, NJ) -- Kean Stage will present a disability-inclusive performance by deaf singer/songwriter Mandy Harvey at Kean University's Enlow Recital Hall in Hillside on Saturday, February 22 at 7:30pm. Harvey is best known for her 2017 appearance on America’s Got Talent, where she received the "golden buzzer" from judge Simon Cowell, sending her straight to the finals. Live stream word captioning, ASL interpreters and assisted listening devices will be available for patrons at this performance.  Harvey will conduct two workshops on Thursday, February 20 with students enrolled in Kean's School of Communication Disorders and Deafness prior to her appearance on Saturday.

Harvey will sing jazz standards and inspirational original songs, including several from her recently released fourth album, Nice to Meet You.

A review in the Los Angeles Times says all you need to know about Harvey: “From the first note, Mandy Harvey tames her audience into stunned appreciation as she glides pitch-perfect from breathy jazz standard to growling blues...At show’s end; the audience is on its feet. Harvey has not heard any of it - not the applause, not the talent of the musicians who shared the stage, not her own incredible voice.”

In 2006, Harvey was a vocal music student at Colorado State University when she developed a neurological disorder that caused the loss of her residual hearing. She left the program and considered other career options but eventually circled back to music in an effort to play guitar with her father.

“We played guitar together for most of my childhood,” she said.

After that small step, she decided to take a crack at singing again. She began using visual tuners to learn each note and took off her shoes so she could “feel” the music.

“I placed my hand on my throat to feel the vibrations of each note,” she said. “You get used to the feeling of it. A lot of it is muscle memory.”

Harvey’s former vocal coach invited her to sing one night at a local jazz lounge.

“I sang one song and they asked me to come back,” she said. “One small step led to something else.”

For the last 12 years, Harvey has spent several hours a day training her voice. Before she knew it, she was recording albums, touring with her band and inspiring people the world over. A friend suggested she audition for America’s Got Talent. She did, but never imagined the impact her appearance had on the judges and the audience.

“I just wanted to encourage people and show a different side of what a disability looks like,” she said.

Harvey played ukulele and sang her original song, Try. The crowd cheered so loudly that the stage began to shake.

“I couldn’t feel the band,” she said. “The whole thing was very nerve wracking.”

She made it through the song and Cowell was so impressed, he pushed the “golden buzzer,” sending Harvey straight to the finals.

“I never in my wildest dreams thought I would make it to the finals,” she said. “It was a really amazing experience!”

The biggest gain from her appearance is that Harvey can now pursue music full time. She has three jazz albums to her credit and recently released her latest, Nice to Meet You.

“The beauty of jazz is that you interpret it differently every time,” she said. “The storytelling and poetry is gorgeous.

While she initially focused on jazz, Harvey now adds pop, indie and rock tunes to her repertoire. Her 2017 book, Sensing the Rhythm: Finding My Voice in a World Without Sound, was praised by Academy Award-winning actress Marlee Matlin, who is also deaf. Harvey volunteers her time at various schools and organizations and is looking forward to her upcoming tour, which will include a week in the Philippines.

“We’re bringing educational material to the deaf schools there,” she said. “They don’t have access to these things. We want to show people they are capable of doing a lot more than they think. It doesn’t matter what your situation is; every person faces barriers, struggles and failures. We all have the opportunity to encourage each other and push each other forward. A lot of amazing people in my life refused to give up on me when I was ready to give up on myself. I’m happy to give that back.”

While visiting Kean University, Harvey, who is also a motivational speaker, will conduct a workshop with students from the Nathan Weiss School of Communication Disorders and Deafness.

“I am looking forward to the Mandy Harvey workshop,” said graduate student Wesley Williams. “It will allow me to gain further insight into her experience with deafness and navigating through her career despite her challenges. Additionally, this will be beneficial to me as a clinician as it will add to my empathy and understanding to individuals with similar experiences."

Stephanie Perez, a speech-language pathology graduate student, is anticipating the benefits of learning from Harvey’s experience.

“I see it as a great opportunity to gain more awareness of the deaf community by an individual who has defied normative views on what can be achieved despite her hearing loss,” said Perez. “A unique feature to this workshop is gaining her perspective of navigating through a hearing world and hearing dominant career. Despite her challenges, she pursued something that she loves.”

Enlow Recital Hall is located at 215 North Ave., Hillside, on Kean University’s East Campus. Tickets are $45-$65 and can be purchased at the Kean Stage Box Office in Wilkins Theatre on Kean University’s main campus, by phone at 908-737-7469 or online at www.keanstage.com.