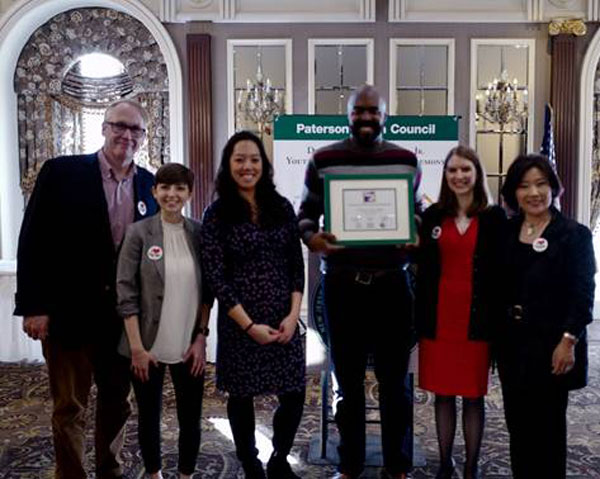 (PATERSON, NJ) -- The Wharton Institute for the Performing Arts’ Paterson Music Project (PMP) announced that it is this year’s recipient of the Paterson Youth Council Dr. Martin Luther King Youth Recognition Award for its exemplary work with over 250 students in grades 2-9 throughout the city of Paterson. The annual award recognizes the outstanding achievements of individuals and one youth-serving organization making a difference in the lives of Paterson’s youth. The Paterson Music Project, as well as four students, one adult, and one elected official, was honored for its impact in Paterson at an awards ceremony held on Monday, January 20 at 10:00am at The Brownstone House, 351 West Broadway in Paterson.

Said PMP Director Elizabeth Moulthrop, “It is an honor to be recognized by the Paterson Youth Council. There are so many incredible organizations in Paterson with people behind them making a positive impact on the city of Paterson on a daily basis. At PMP, we are grateful to work alongside such an inspiring group of change makers and passionate community advocates. I count myself lucky to get to work with some of the best kids and families in New Jersey and make music with them every day.”

The Paterson Youth Council, a citywide youth-led and youth-driven civic organization, has been representing the interests of young people in the city of Paterson since 2006. The Youth Council sponsors special events throughout the year, including the Dr. Martin Luther King Youth Recognition Award Breakfast, and is faciliated by the New Jersey Community Development Corporation.

Said Wharton Institute for the Performing Arts Artistic Director and Principal Conductor Helen H. Cha-Pyo, “This special recognition comes to us as a huge encouragement. Dr. King said, ‘Intelligence plus character is the true goal of education,’ and at the Paterson Music Project, we continue to strive to be a place where our young students can grow both in mind and in character through the transformative power of music. I would like to applaud our talented and dedicated staff and teaching artists for their tireless efforts in providing excellent instruction to our students.”

“Being recognized with this special award on the actual MLK day is extremely touching,” said Peter H. Gistelinck, Executive Director at the Wharton Institute for the Performing Arts. “Expanding the Paterson Music Project per our strategic plan will remain our first priority.“

The Paterson Music Project (PMP) empowers children to achieve their full potential through the joyful pursuit of musical excellence. Inspired by the global El Sistema movement, PMP uses music education as a vehicle for social change in its home city of Paterson.

PMP provides tuition-free musical training to students throughout Paterson after school. Students study a primary instrument and participate in ensemble practice and instrumental sectionals. They receive an average of 6 hours of instruction per week and in addition, may participate in an optional private lesson program. Students perform frequently for the community and perform an average of 30 events annually.

PMP launched its first site at the Community Charter School (CCSP) of Paterson in January 2013 with 32 second graders and has since added a new class of students each year. Since its inception, PMP has partnered with the Paterson Public Schools to open programming to students at Paterson Public Schools 1, 24, and 26. PMP has also partnered with William Paterson University’s Music After School Program to create a central band site at the Norman S. Weir School to serve over 60 students. There are now over 250 students in the program across the city of Paterson grades 2-9. PMP also runs Saturday classes at the St. Paul’s Episcopal Church in Paterson.

Paterson Music Project is a program of the Wharton Institute for the Performing Arts. Wharton is New Jersey’s largest non-profit performing arts education organization serving over 1,500 students of all ages and abilities through a range of classes and ensembles including the 15 ensembles of the New Jersey Youth Symphony which serve 500 students in grades 3 - 12. Beginning with early childhood music classes for toddlers, the Performing Arts School offers 500 private lessons and group classes each week, ensuring there is something for everyone of all ages and abilities.