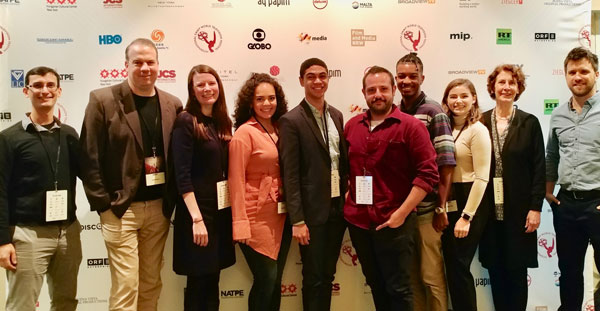 “I had never done a staged reading before, so it was a full day of learning and experiencing, which I am so grateful to have been a part of,” said Ms. Tobias, a resident of Winfield Park and recent recipient of a dual degree in BFA Theatre Performance and BA Honors History. “The best part was seeing the screenwriter before and after the reading. Violet [Macdonald] looked over the moon about what we had done and that just made me feel so fulfilled. Having the opportunity to talk to her afterwards and discuss her script was surreal.”

Ms. Macdonald is an Australian/British writer living in Montreal. She grew up on the island of Tasmania, where she spent her time writing hundreds of poems and short stories, some of which would see her go on to win accolades such as the Ted Hughes Young Poets Award, the H.E. Bates Short Story Award, and the title of reigning Australian Junior Bush Poetry Champion. After finishing her studies in English Literature and Philosophy, she became an award-winning copywriter for global marketing agencies. Ms. Macdonald moved to Montreal in June 2019, where she plans to pursue her dreams of creative writing full time.

Created in 1989, The International Academy of Television Arts & Sciences Foundation has its own Constitution, Officers and independent Board of Trustees. Each year, The Foundation administers the Sir Peter Ustinov Television Scriptwriting Award. The competition is designed to motivate non-American novice writers under the age of 30, and offer them the recognition and encouragement that might lead to a successful career in television scriptwriting. Entrants are asked to create a completed half-hour to one-hour English-language television drama script. The award winner receives $2,500, a trip to New York City, and an invitation to the International Emmy® Awards Gala. Please visit www.iemmys.tv for more information.

Premiere’s partnership with the Academy’s Sir Peter Ustinov Television Scriptwriting Award dates to 2006, when Mr. Wooten was first approached to direct and produce a reading of the winning script. Mr. Wooten has cast a number of Kean University students and alumni over the years as an extension of Premiere Artists, the theatre’s professional development program for college students and recent graduates. Premiere Artists provides unprecedented access to leading professionals in the field, practical experience and professional union credits to early-career artists through apprenticeships, internships, understudy positions and uniquely tailored master classes. Through the Ustinov Reading, Kean students and alumni are afforded the opportunity to perform in front of television industry professionals from around the world and then network with them at an exclusive post-event party sponsored by HBO.

“This unique collaboration with the International Academy of Television Arts & Sciences is a perfect embodiment of the Premiere Stages mission to develop and encourage emerging artists,” stated Mr. Wooten. “I cannot think of another program in the nation where students and alumni are afforded the opportunity to perform the work of budding international writers, working alongside professional actors in front of an audience of the world’s leading television producers.”

PHOTOS: (TOP)The cast and crew of Violet Macdonald’s The Wolf.