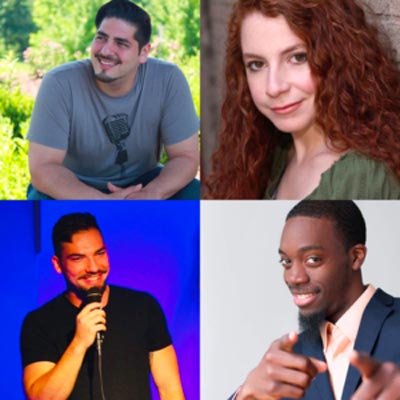 (HOPEWELL, NJ) -- Stand Up For Something  is a series of comedy shows created by comedian Dan Marquez as a way of giving back. Each show benefits a different, local charity whose hard work and selflessness should never go unnoticed. On Friday, December 6 at 8:00pm, the Hopewell Theater presents a night of standup to support Autism Speaks, which features comedians Dan Marquez, Erik Terrell, Mollie Sperduto, and Geoff Colella.

Dan Marquez is a Brooklyn born, New Jersey raised comic whose comedy has been described as "a fresh perspective" and "side-splittingly witty". He performed at popular NJ comedy clubs such as the Stress Factory and Catch a Rising Star, to national venues such as Comedy Works in Denver and Gramps in Miami. With topics ranging from a look in the mirror to unspoken phobias, you never know what's gonna come out of Dan's mouth. You do know one thing: it's gonna be funny.

A regular at Carolines on Broadway, Erik Terrell starred in his one man show, "Officially Overseas" at the Glasgow International Comedy Festival last year. He won the Conshy Comedy Fest and was featured on Comedy Time TV, "Carolines Presents" and multiple Industry Fests including Burbank and Gilda’s.

“Sperduto” is Italian for “lost” – but not just regular-lost.  We’re talking, middle-of-nowhere, completely and hopelessly lost with no chance for recovery. Mollie Sperduto spent her 20s living in a retirement community, and that’s only the tip of the iceberg when it comes to how “Sperduto” her life truly is.  Nothing can simply be done in a normal way with her. She enjoys sharing details and stories of her life at shows and clubs all around the Northeast (and beyond!).

Geoff Colella is a regular at Philly comedy clubs, and can often be seen in South Jersey shows as well. Cutting a slice of everyday pie, Geoff makes people laugh till they cry by putting every day under the comedy microscope. This up and comer isn't someone you want to miss!

The Hopewell Theater is located at 5 S. Greenwood Avenue in Hopewell, New Jersey. Tickets are $30 and available for purchase online.